Abir Hashem is a documentary film producer and member of DOCUDAYS “Beirut international Documentary Festival. She started her university studies in law but quickly understood it wasn’t for her, so she changed to the film industry. Talented and beautiful Abir started her film experience in Beirut, Lebanon. Together with brothers opened a production company called SOLO FILMS which still operates.

Initially Abir worked as assistant and executive producer, first on documentaries, corporate videos and commercials, then as executive and production manager, as well as local producer, producer and assistant producer. In 2011 she was selected by EURODOC and DOCMED to participate in the training based on international co-production of creative documentaries.

I met Hashem in Rome at the end of 2016 at the MED Film Festival during the promotion of her last work, Asphalt. I admit, she is a real “wonderwoman”. For JL Interviews magazine we talked about her latest and future project, love for her motherland and women’s situation in the Arabic world. If everything depended on her, she’d remove all borders and make a world one nation.

As a film producer you travel a lot. Today we met in Rome, where you will be the next few days? What is your favorite place in the world?

As a producer, I do a lot of films inside Lebanon, where I travel all around the country. In every project I discover a new Lebanon that I thought I knew. Every project helps me to know my country better at all levels. Beside Lebanon, I travel to different countries for work and pleasure, Rome and Istanbul are my two favorite countries, maybe because I love coffee? [laughs]

You came to Rome to screen your movie “Asphalt” at MED Film Festival. How did the critics and public receive it?

When we started screening the film Asphalt internationally, first in Nyon, at Vision De Reel, and then in many different countries and in Rome, we were a bit worried that the audience won’t understand the subject. In the end we were surprised by the feedback and the criticism that we received. Actually, the audience was very clever and earily got into the story. The Roman audience was so positive and wanted to know all about the characters of the film and about Arabic countries.

Was this film seen in other countries? What is the message of this film and what was the process for putting this film together?

Asphalt is an independent film. We were funded by different institutions like Doha Film Institute in Qatar, AFAC and SIB in Lebanon, OIF in France. Also the film was selected to participate at DOCMED, a workshop dedicated to Arabic producers. The film took 4 years to complete; it was a long process due to many political fractures that happened in the region. Asphalt is having its year of festivals screenings, it was screened as world premiere at Vision de Reel in Switzerland, Carbonia film Festival, Cinemagrante in Portugal, Lebanese Film Festival, Medfilm festival in Rome and many others.

How did you start SOLO FILMS? Originally you were going to be a lawyer, what was it that made you change your career and enter film making?

After I finished school, I studied Law at university and I soon realized that it wasn’t my stuff. So at that time, along with my brothers who also worked in the film industry, we started SOLO films in Beirut, and there I felt that it was the job that I want to do and I continue doing it. As I always say, find a job where you will never need a vacation.

You only work on documentary productions. What kind of subjects are your films about?

My films have various subjects. Asphalt was about truck drivers in the Middle East and raised the question of borders and difficulties and also the life of those truckers. Cities of Anxiety has a different topic, it’s about cities which are like humans, their bodies are the streets, buildings and their soul are its people, influenced by their environment and affected by the inhabitants. The result of this similar interactive relationship has different manifestations, maybe the most prominent disease of the era: anxiety. I’m also working on different topics at the moments, one about books and knowledge and the other about corruption. I can’t talk more about it, it’s still confidential.

Could you say something more about talented people you collaborated with in making your films?

As I’m working mostly on documentaries, I rarely work with actors in my films. I have to confess that I rarely worked with a director – there has never been this kind of chemistry between us. I really don’t know working with any crew that I don’t feel confortable with at all levels, that’s why I only accept working on projects that I am in good relations with the director and when I am interested in the subject. It should mean something to me and not betray my beliefs and my ideology in general.

You are a Muslim woman living in Beirut, Lebanon. How would you describe your motherland? Is it safe now to come to Lebanon?

As a person who lived through all the recent wars in Lebanon, I still feel that this is the right country for me.  Most of the Lebaneses never left their country. As Muslim, as you should know, Lebanon is a mixed country, we never had any problem regarding religions, till the civil war started in 1975, the war shredded the whole country, humans and sanity. But I still believe that all Lebanese still love their country regardless of what we passed from through it, for me it’s all politics.

Isn’t hard for a beautiful independent talented woman like you to live in the male predominant Arabic world? How hard is it for a woman to succeed in the film in Lebanon?

Women in Lebanon in general are very successful at all levels, also in the film industry, they marked their territories and are very talented. We have many successful women filmmakers whose films reached international platforms and audiences. Sometimes I find it harder to compete with another woman than another man here.

What could you tell us about women’s rights in Arabic countries? Which places are more radical than others?

Women in my region fought a lot to get their rights on many levels. Women in Lebanon, Syria, Iraq and Egypt and some other countries, were luckier in having more freedom to achieve higher levels in society and government, unlike women in Saudi Arabia and other countries in the Gulf, are still fighting for minimum freedom and rights, for example driving which is forbidden for women in Saudi Arabia.

Which laws would you like to change if you could?

If it were up to me to rule the world, the only thing I would do is to remove all borders to make the world one nation.

You have a very talented daughter who is a 2D artist. What are your hopes for her and do you think she will have to leave Lebanon to have a successful career?

It’s very hard for a new graduate in 2D animation to start a career anywhere in the world, so in a small country like Lebanon, where this field is still so fresh, specially, if you want to do creative animation films and not to be stuck in the TV commercial area. She may travel to get more experience abroad, but I guess she will return to live and continue her career in Beirut with more challenges to achieve her dreams.

Does the Middle East situation and ISIS activity have an impact on your work?

I have to admit that my work was affected by what’s happening around me in the Middle East, there’s war everywhere, in Iraq, Yemen and Syria, and also we can’t deny that the situation in Egypt or other countries of the Middle East is better. But at the same time all these wars inspire me and many filmmakers to find and produce new topics moved by the richness of disasters around us, it’s like a double edged sword, one which destroys but also drives us to document these destructions of stones, humans and souls.

What do you think about this? Is there hope to resolve it? Do you feel safe in Lebanon?

I’m an optimistic person, I always hope for the better, and I’m sure we will overcome all the struggles around us.

You and your family know what war means. Do you think war is indispensable for humans to exist?

No, I don’t think so. War destroys stones, humans and souls. It haunts you all your life and affects your inner being. The most difficult feeling is when you say to other people who had never experienced war that you are used to war, or used to hearing the bombs. Nobody wants to feel okay with the war. I don’t want to feel okay with it, but that’s the reality that we lived and are still living in our region.

What are your dreams now? Is there something you would like to change in your life?

My only dream now is to finish producing my new film about corruption, and to have another interview with you to talk largely about it. 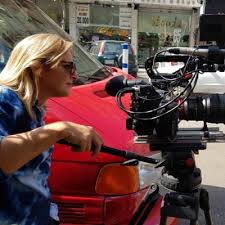