SANER:LOVERS IN LONDON & BRANDI MILNE: ONLY IN DREAMS IN ROME 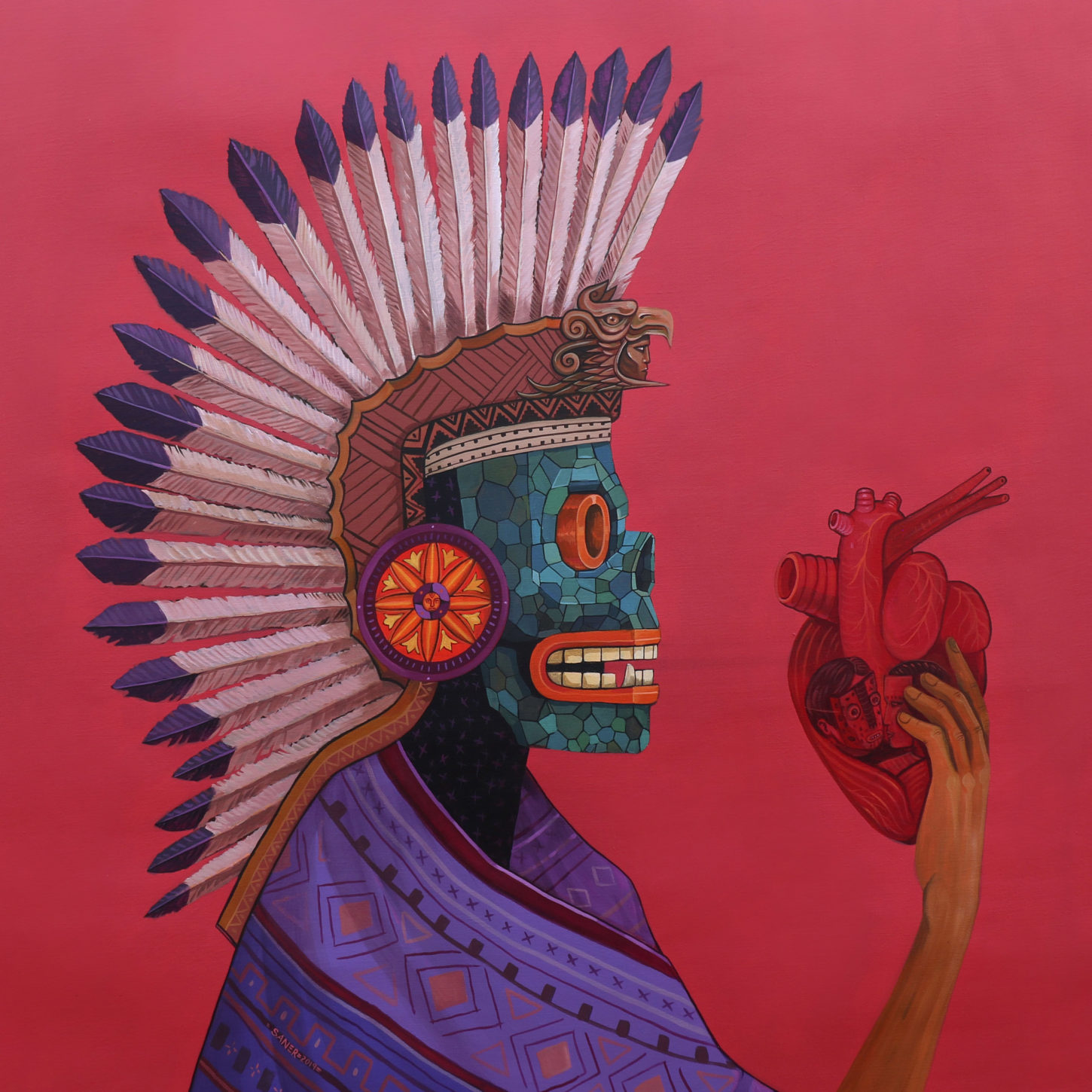 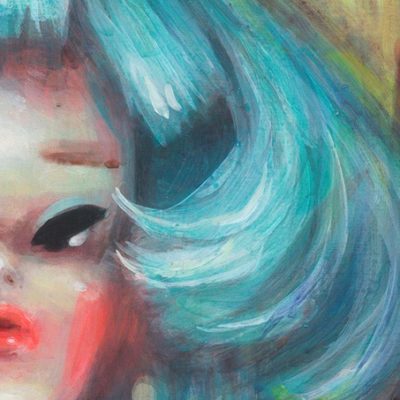 The Mexican street artist SANER, aka Edgar Flores, will return to Europe with his first UK solo show titled Lovers, at Dorothy Circus Gallery London. Saner has gained international success thanks to his active role in the Mexican street culture and his participation in numerous projects across the globe. His surrealist murals, depicting animals and masked characters, poetically address themes and issues of urban and environmental development, hunger, violence and the eternal struggle for survival that characterize modern society. Born in 1981 in Mexico City, Mexico, the world-renowned Mexican street artist, illustrator and graphic designer Edgar Flores, known as Saner, creates a distinctive vision of the world. Part of the Mexican graffiti art scene since 1990, which directed him to earn a degree in graphic design from the Universidad Autonoma de Mexico, Saner now works on different surfaces that include walls, canvases, paper and found objects, combining a strong social interpretation with a surreal mood and a veil of mystery. His work is deeply influenced by Mexican and worldwide folklorist heritage and pop culture and has been exhibited in galleries worldwide, from Mexico City and New York to Berlin, London and Barcelona. His great admiration for artists such as Frida Khalo and Gonzales Camarena and the exposure to the Western pop art led him to freely wander between graffiti, graphic design, painting and drawing. Connecting illustration manners, expressionism, naïve art and surrealism with street art techniques, Saner succeeds in giving a characteristic urban look to all of his pieces. Throughout his numerous international project, Saner has developed a new approach towards his street art, by integrating the local communities’ views and opinions into his public works. His surrealist murals, depicting animals and masked characters, poetically address themes and issues of urban and environmental development, hunger, violence and the eternal struggle for survival that characterise modern society. Saner questions modern society encouraging the viewer towards a mindset of oneness, as opposed to otherness. Aiming to rediscover the respect for the natural world and all living beings, the artist explores how ancient people had a more sophisticated and natural relationship with their surroundings and with each other. In his drawings, the contrast of light-shadows and light-darkness reveals the eternal battle of man in his absurd struggle for survival. Establishing paradoxical forms in his work, like tradition and innovation, violence and tenderness, simplicity and complexity, his images are pervaded with personal introspection. Saner uses everyday motifs to create mysterious beings with aesthetics of pre-Hispanic traditions, specifically through the use of Nahuale masks, which according to mythology have the power to transform humans into animals. Just like Diego Rivera’s and David Alfaro Siqueiros’, Saner’s message is quite political and depicts the struggle of a country that’s crumbling little by little. His works encourage people to look at the past and learn from it and are a celebration of the history and culture he originates from. To leave a part of himself in every painting or wall, to change people’s point of view, to shake them and let them be part of his work, to democratize art: that is what Saner aims for. Saner’s art is very universal as he tries to touch people’s core by showing them that all we believe —from the importance given to material things to the inherent hypocrisy that accompanies capitalism— is just a mirror. For Saner, art is not about luxury or pure aesthetics, rather it becomes an essential part of society. Saner opens the eyes of his spectators and shows them the crudeness and beauty of life.

Dorothy Circus Gallery London is proud to present to its British audience the solo show Lovers by the Mexican street artist Saner, aka Edgar Flores, exhibiting for the very first time in the UK. Saner has gained international success thanks to his active role in the Mexican street culture and his participation in numerous projects across the globe. By questioning modern society, Saner’s art becomes universal and invites the viewers to improve themselves, both as an individual and as a society. Life appreciation for both the human life human beings the flora and fauna are a constant in the artist’s message. Deeply influenced by pop art, graffiti, painting and illustration, Saner will fill the gallery walls with a brand new series of 7 paintings, acrylic on canvas. With a bright and colourful palette, Saner thoughtfully borrows and assimilates symbolic and iconographic elements from Mexican folklore and customs, to investigate on the universal theme of love. A central element in his works are the masks that his characters always wear. These masks, borrowed from the Nahuale culture, and ancient indigenous tribe in Mexico, have become the artist’s signature style. “The masks are the transforming element of my characters, a spiritual link. These characters are shown with an acquired power thanks to the animal, shape or material they are made of”, explains Saner. Contrary to a first impressions, his characters do not intend to conceal anything from the viewer, rather the masks serve as a way to unveil the inner soul, emotions and desires of their characters. Although subtle, the flora surrounding Saner’s subjects provides them with a sacred space, and remind us of the importance that nature has in our environment. Therefore, along with the animal spirit represented by the masks, we also see a natural spirit which protects the characters, symbolising the force of life, pervading the works with acute personal introspection. Combining a strong social interpretation with a surreal mood and a veil mood, the art of Saner poetically addresses themes and issues of personal, urban and environmental development. Once again, Saner will remind us that only with love and self-appreciation we will be able to overcome the violence and the eternal struggle that characterise our modern society. 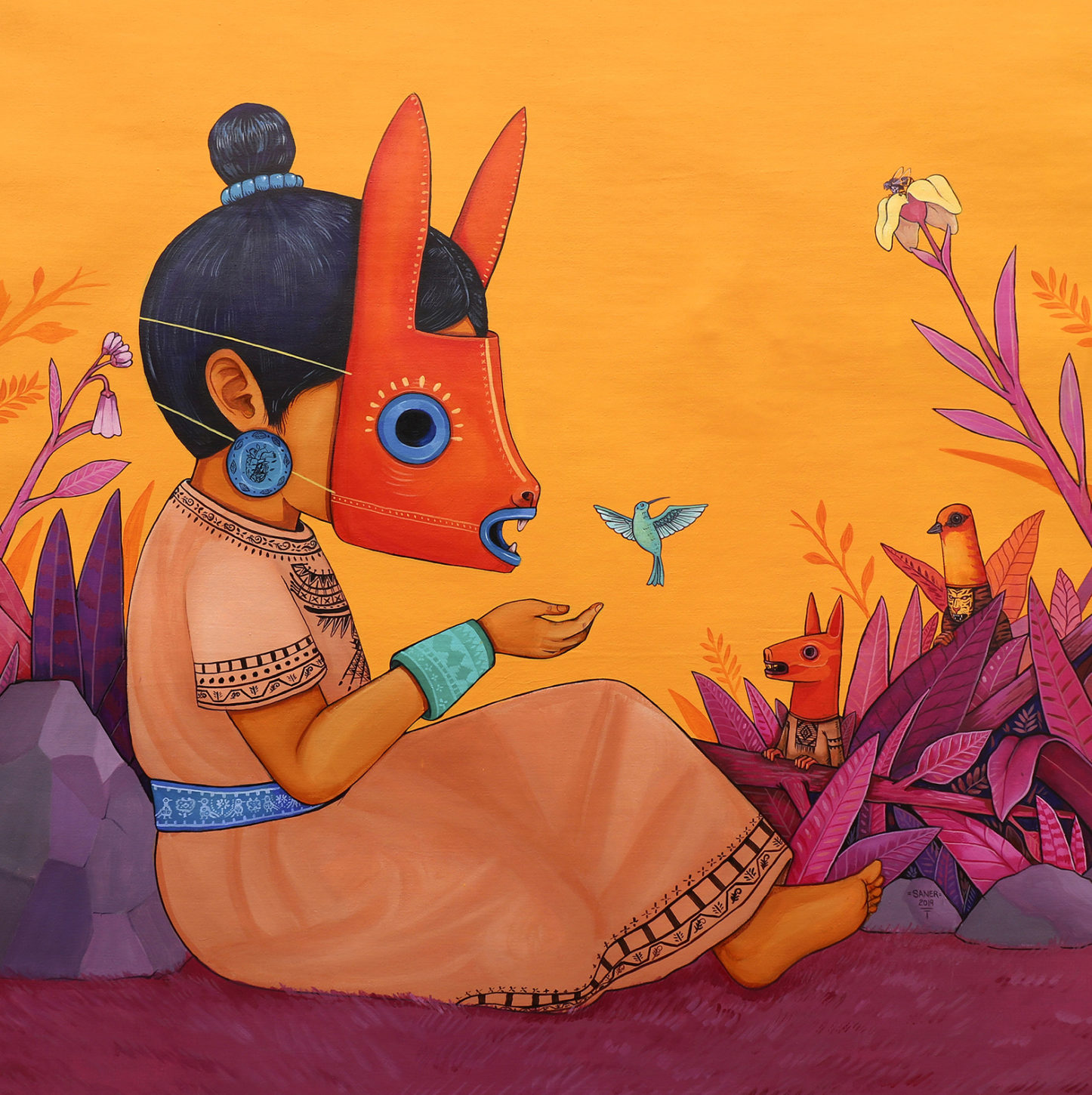 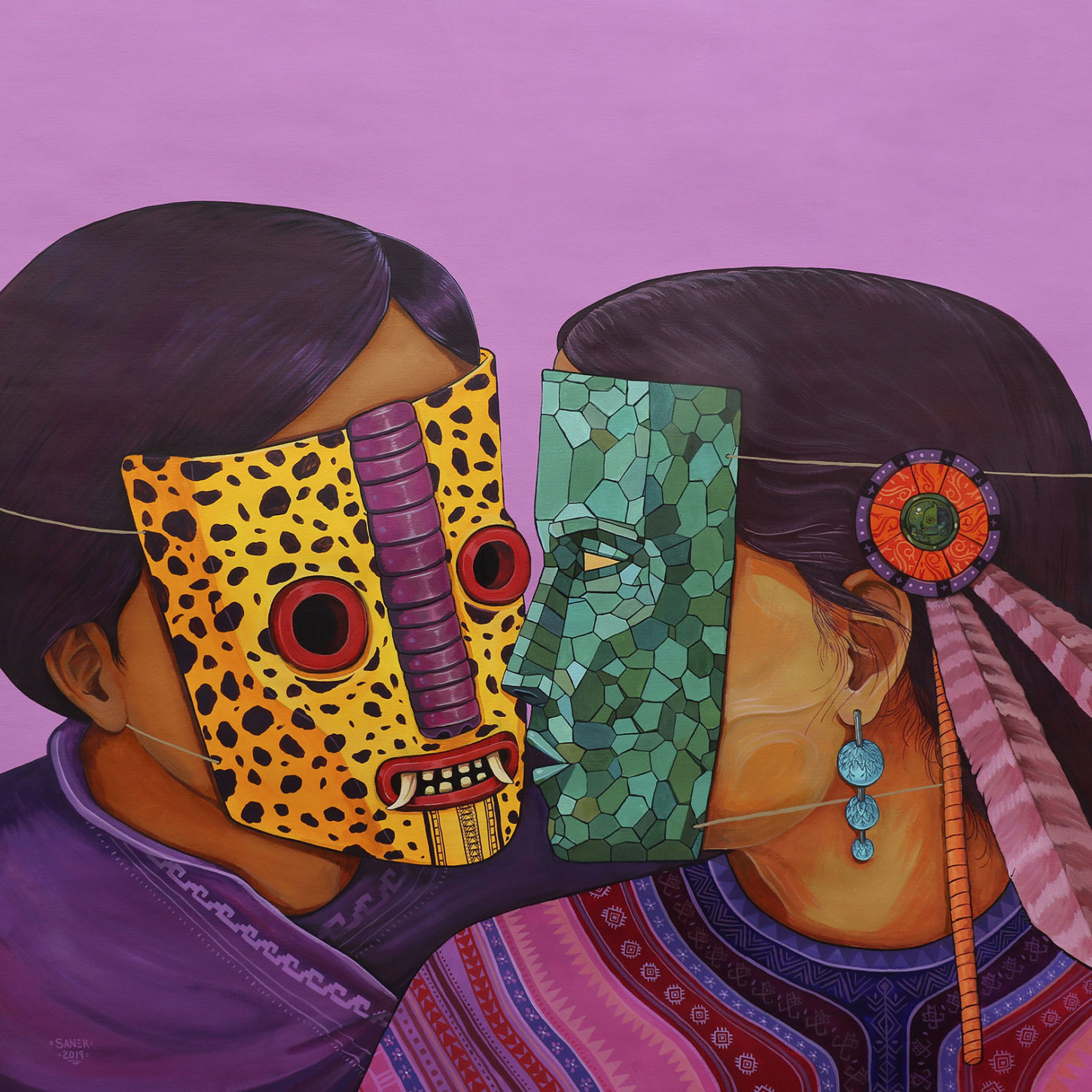 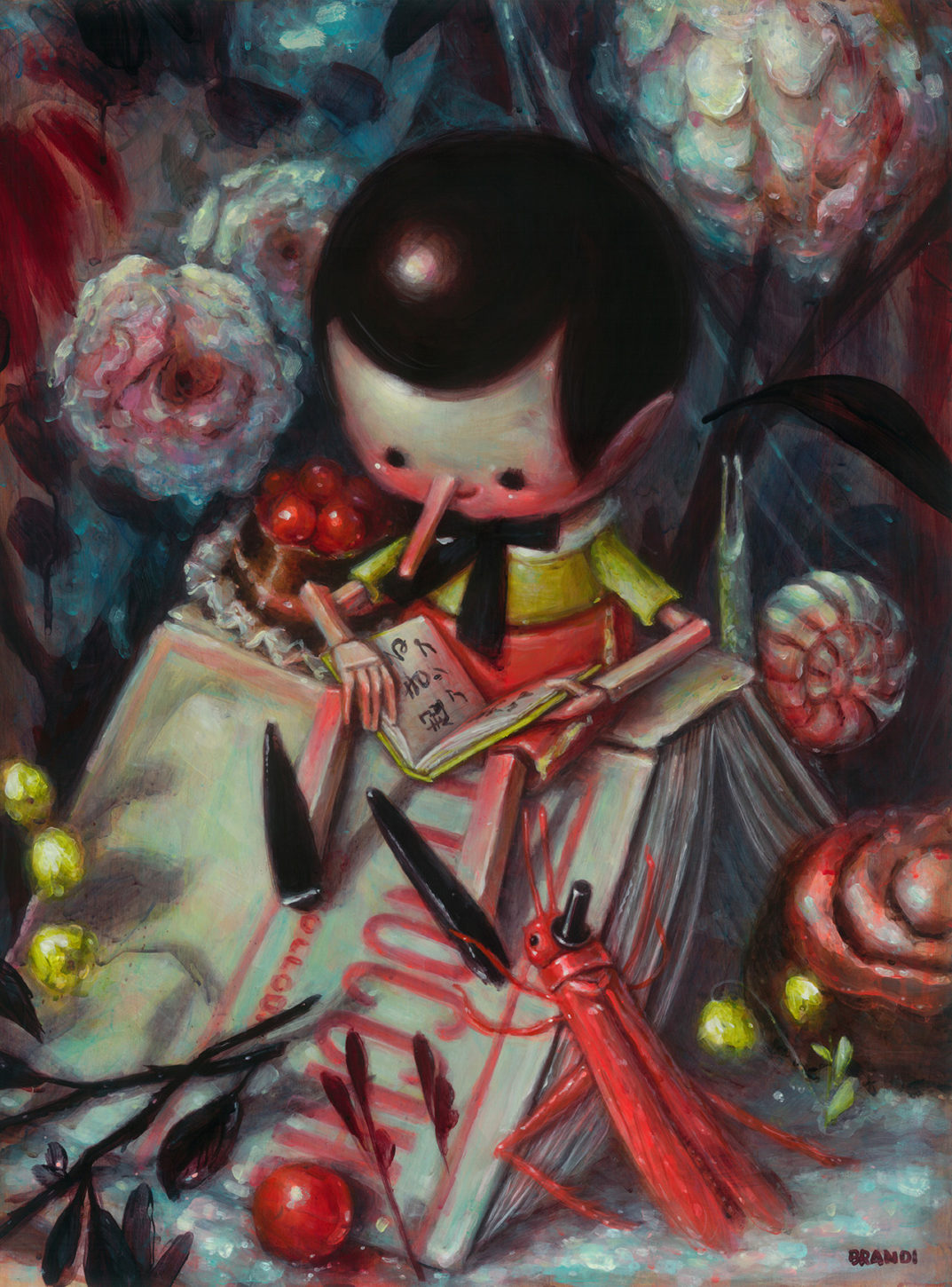 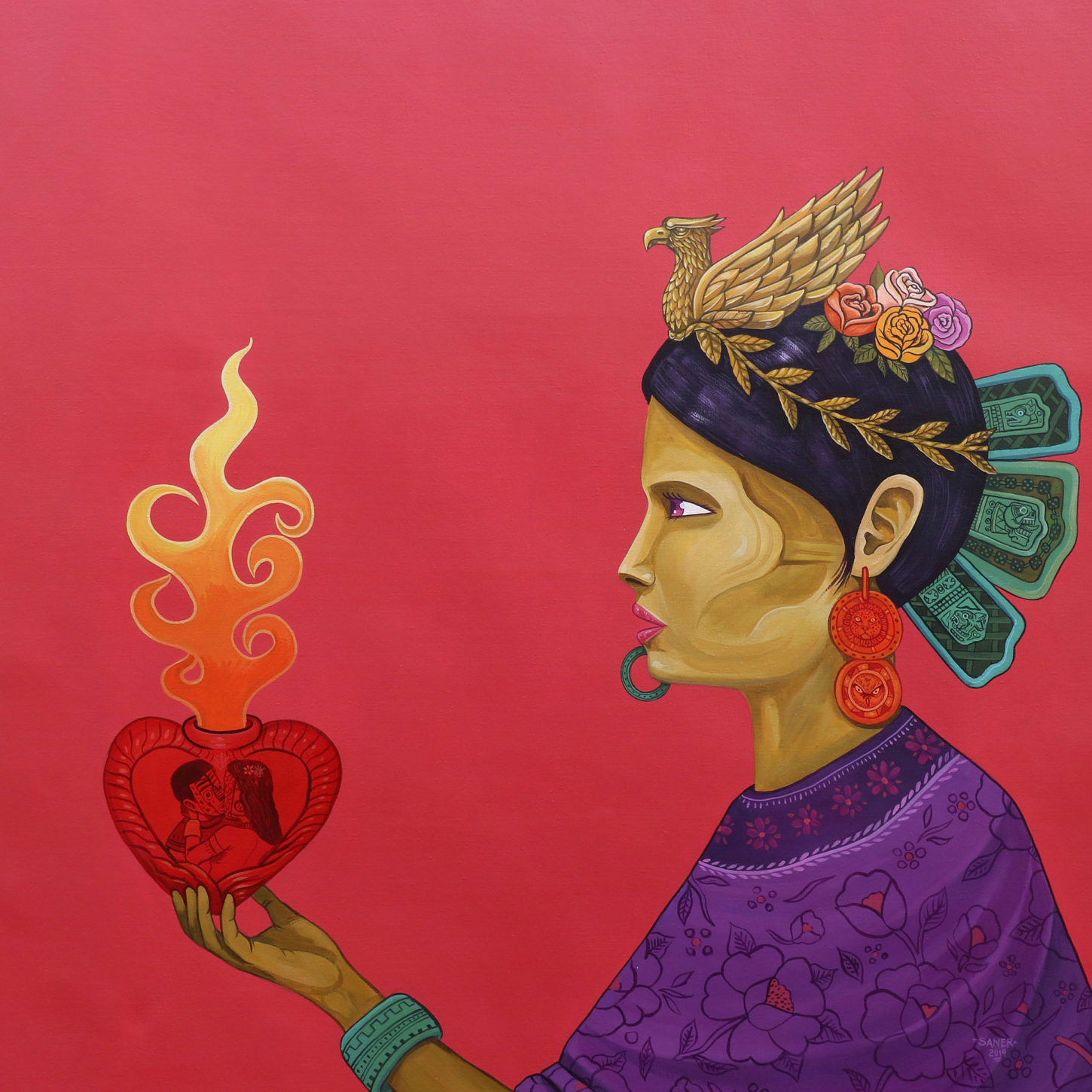 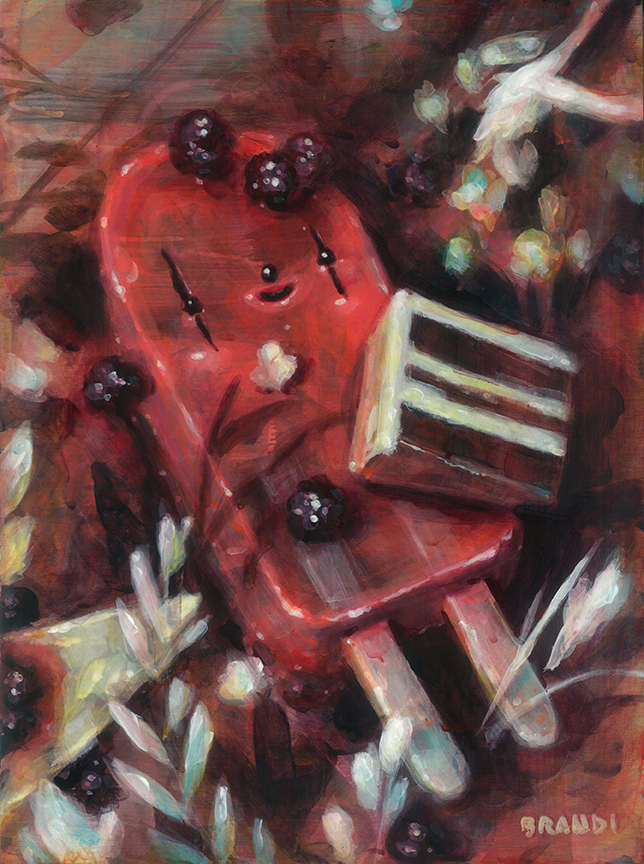 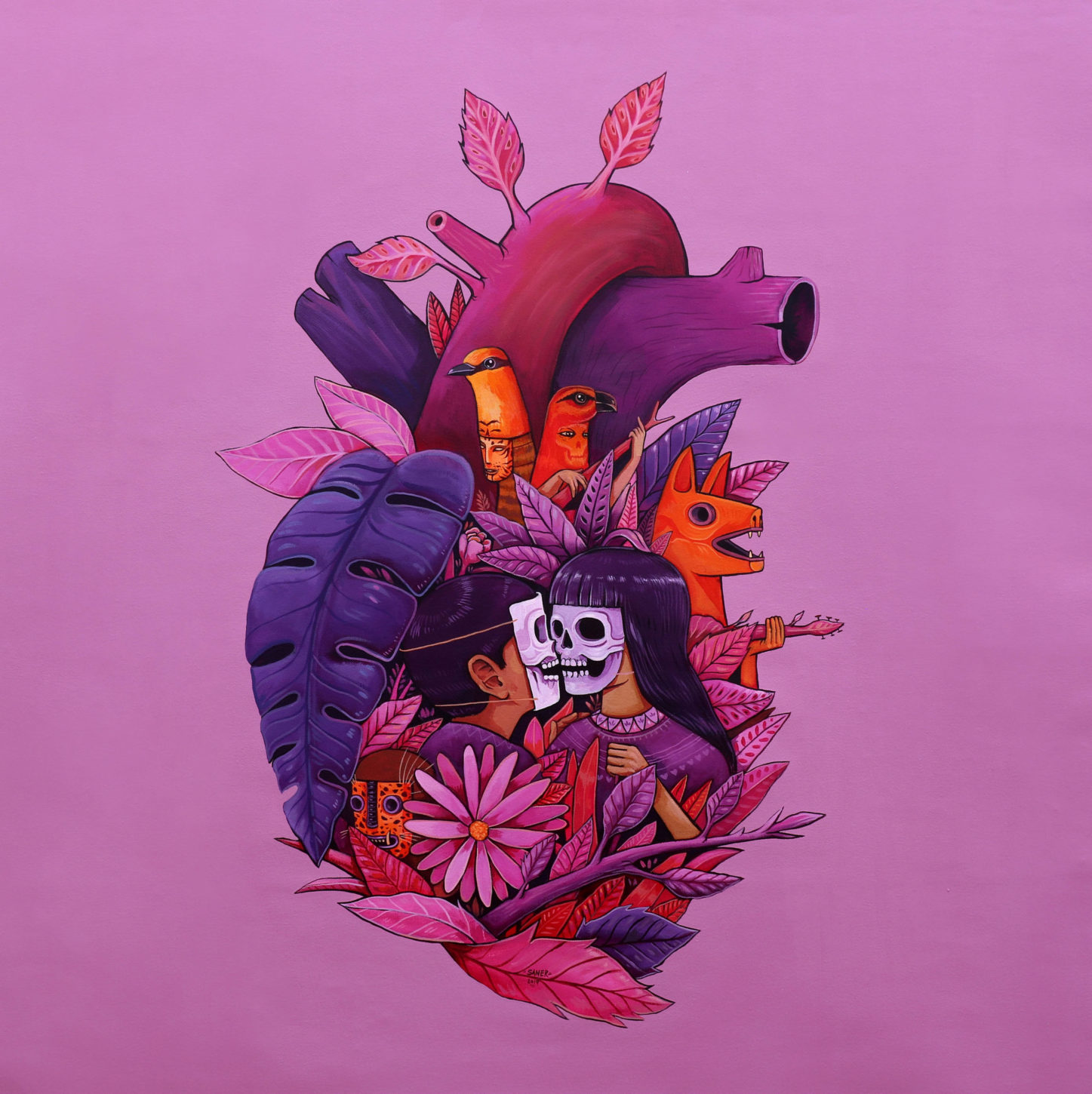 Dorothy Circus Gallery Rome is proud to present to its Roman audience the solo show Only in Dreams by the American artist Brandi Milne, exhibiting for the very first time in Europe.  After the summer break, our gallery resumes its activity with another and exciting chapter of the Turning Page programme: the focus will be once again on the Woman and childhood, themes this time explored by the established Pop Surrealist artist Brandi Milne. Strongly influenced by the cartoonish world and music, Brandi Milne has experienced a constant artistic evolution throughout her entire career, developing an accurate and unmistakable signature style. Disney, Gumby and Pokey, vintage decorations, the music of Elton John and the writings from Jack Kerouac are only a few of her sources of inspiration. Her colour palette is recognisable by the bold choice of pink, red, green, and intense blue, and her perfectly balanced brushes sometimes seem to deconstruct the otherwise well defined contours of the characters, both physically and spiritually. In Only in Dreams, Brandi Milne will present 24 new brand artworks of variable size, between drawings and paintings, depicting children, vintage toys, sweets, and animals, carefully balancing light and dark elements on candy-gore backgrounds. Female characters are represented with very simple faces and only with eyes, inviting the viewer to project their own image or identity onto the character, allowing for a more personal interaction and connection. Her surreal drawings and paintings reveal the influence of the artist’s childhood, demonstrating her intense emotions and remarkable understanding of the transition between the cotton padded, sugar coated world we live in as children and our first immersion into the adult world. Brandi’s subjects embody the feelings and the inner world of a complex artist who has defined a personal research focused on the apparent contrast between the tenderness of her protagonists and the strength of the message they carry on. Her obsession with the child realm is interpreted with a profound resistance to transitioning into adulthood, where realities becomes synonym of pain and suffering. By holding onto sweet childhood memories, Milne’s art codes takes refuge in a happiness that is intrinsic to our youth. Tapping into our subconscious Brandi’s works will also disclose a bittersweet message related to themes of anxiety, fear and loss. Loyal to the imaginary that has characterised and defined our childhood, Milne will lead the visitor into her playful dichotomous world, compelling the observer to face the absurdities and the paradox of life, embodied in the anguished shocking pink. Dorothy Circus Gallery is a space dedicated to the most intriguing avant-garde in contemporary art, throwing a spotlight on the prime movers and forerunners of the fascinating USA-born movement known as low-brow or Pop Surrealism. The gallery is also committed to introducing the New Surrealism and Magic Realism movements to the international art scene, with the aim of always providing a complete vision of three of the main contemporary art fields: Asian Art, Street Art and Pop Surrealism. Dorothy Circus Gallery opened in Rome in 2007 and rapidly affirmed itself within the Italian art and cultural scene. In 2017, on the occasion of its 10th year anniversary, Dorothy Circus launched a temporary gallery in the charming district of Notting Hill. The gallery subsequently moved to a permanent location a few steps from Marble Arch, at 35 Connaught Street, in November 2018, continuing to reach new audiences and to deliver thought-provoking exhibitions. Through dedicated and rigorous research, and always anticipating market trends and interests in the global market, the gallery plays a key role in presenting renowned and established artists alongside some of the most promising artists from around the globe.