Abaco was founded in 1989. Actively and intensely engaged in research aimed at creating and producing multidisciplinary and multimedia shows. The founding members Franco Saba, Paolo Aiello and Maestro Nicola Bernardini collaborated closely with Luciano Berio at the Tempo Reale center in Villa Strozzi, Florence until 1992. They experiment with new technologies in computerized scenic-music in real time to produce a series of concerts and shows, with music by Maestro Berio and Maestro Bernardini in various Italian cities. In 2006, Abaco began in Sardinia and, in 2009, it was recognized by the Sardinia Region (under article 56). The current core members of the company set themselves the objective of developing a working method based on sharing of previous individual experiences in the experimentation and realization of theatrical and cinematographic productions. Engaged in the definition of a style that is a crossroads between drama and multimedia events, from graphics to set design, from video to costume, their works are founded on their poetic-aesthetic background and in continuous renewal. In 2014, the Abaco Art Academy was born, a school and master class for actors. Today, Rosalba Piras manages the Abaco Theatre.

Since 2007, the Abaco has produced numerous theatrical shows for adults and children, co-productions and short films, as well as scenic experiences for youngsters with social problems and psychiatric patients realized in collaboration with Social Cooperatives and schools. Abaco has expanded its presence in the region, in collaboration with several municipalities, with its historical exhibitions and giving birth to new projects: Festival Giardini Aperti “en plein air”, begun in 2008, which takes place in the city parks of Cagliari and in the tourist resort Torre delle Stelle di Maracalagonis. Season Theatre of Sanluri – Abaco, since December 2014 manager of the Theatre of Sanluri, organizes theatrical seasons yearly: 2015 Aquarium Season, Zefiro 2015, 2017 OFF-season, 2018 Mistral. Scuole e Famiglie a Teatro, (Schools and Families at the Theatre), born in 2016, is the exhibition realized in the socially disadvantaged districts of Cagliari, to establish a cultural reference and meeting point among different generations and cultures. Teatro Fiabesco, founded in 2007, is dedicated to schools and brings the theatre to the younger ones in Maracalagonis and Monserrato. The most important international project of the theatre are: 2018 –“The Little Big Princess” from Le petit prince by Antoine De Saint  Exupery, directed and starring Karim Galici and Veronica Gotay  Rodriguez at the premiere at Noth Park University in Chicago. 2015 – “La III Onda” directed by Lea Karen Gramsdorff and dedicated to the Remembrance Day, with a cast of 14 actors (including 12 under 35 from The Abaco Art Academy) was officially invited by the Italian Institute of Culture in Berlin. 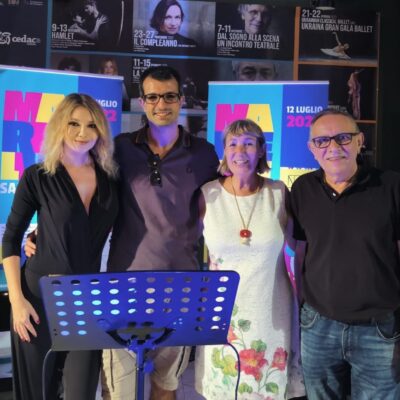 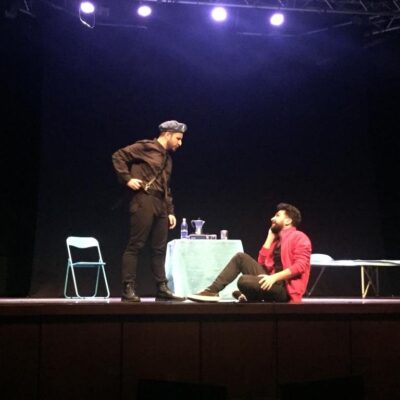 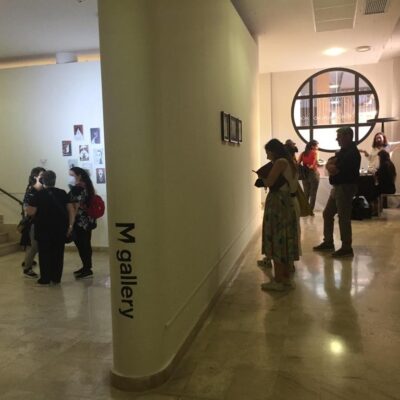 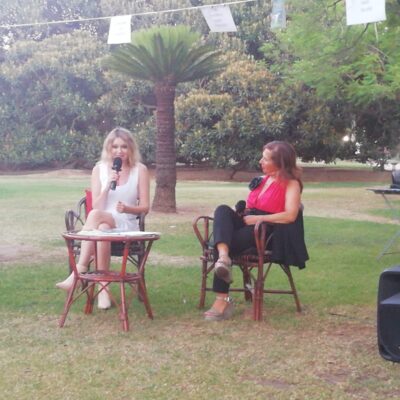 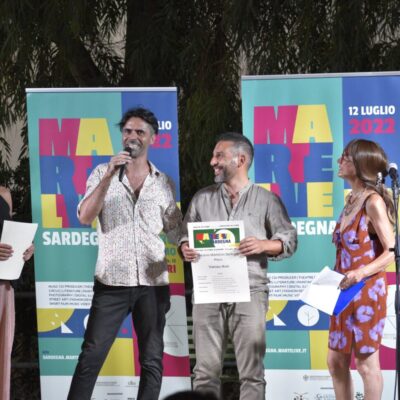 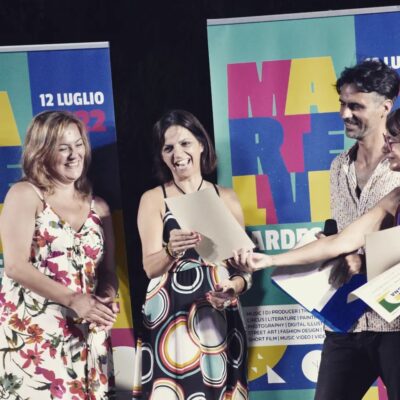 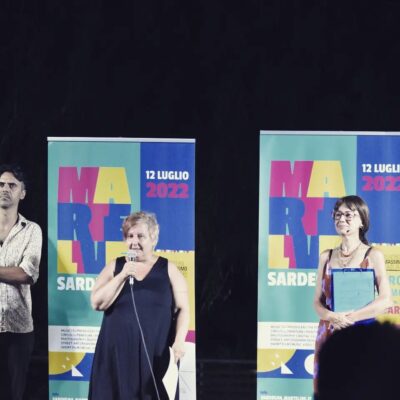 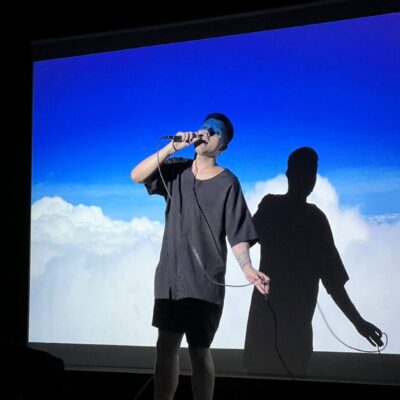 Abaco has become better known with various tours in the regions of Sicily, Tuscany, Abruzzo, Marche, Friuli-V.G. and Piedmont. This summer the Abaco Theatre with the collaboration of Impatto Theatre – an association for social advancement based in Cagliari and founded by Karim Galici that collaborates with international institutions in multidisciplinary projects involving professionals and local inhabitants – organized GIARDINI APERTI FESTIVAL 2022, in Sardinia. The Impatto Theatre began in 2002 as a cultural initiative of the University of Rome 3. It is formed by a group of young people who try to create shows where the divisions between stage and audience disappear. Actors and spectators intermingle in collective creations in which all participants, as in a ritual, a party, or a game. Twenty years later, despite several changes among the cast, Impatto Teatro continues its research, deepening its work with the spectator through all five senses in multidisciplinary projects.

This summer Karim Galici with his Impatto Teatro, of course in collaboration with Abaco Theatre, organized at the Municipal Art Gallery of Cagliari an amazing show. “Ines and the other inhabitants of the museum”,: the title of the project included in the Giardini Aperti exhibition, July 8, 9 and 10, that offered an all-round sensory experience in which the visual experience, the one usually associated with a picture gallery, is not the most privileged sense. The crux of the exhibition in the Municipal Gallery is certainly the Ingrao Collection, consisting of drawings and paintings by Morandi, Sironi, Maccari, De Pisis, the Sardinian sculptor Francesco Giusa, and finally the futurism of Balla and Umberto Boccioni, the true protagonist of the show. Or rather, not Umberto, as much as one of his paintings: The young Ines, as played by the actress Adriana Monteverde, who appears behind the windows on the first floor of the Gallery, meets and accompanies, the spectators on this journey.

During “Giardini Aperti” the winners of the MArteLive Sardegna 2022, the International Competition for Young Talents, were also announced. The Award Ceremony took place on August 1st, in the San Platano Park in Villaspeciosa. Fifty artists and ensembles from all over Sardinia performed on different stages and spaces of the theater. Eleven artistic sections, ten of which competing, to take part in the MArteLive 2022 Biennale, in Rome and Lazio from October 18 to 23. The popular jury and the quality panel voted the winners. For the Theater, Emanuele Bosu will be at the Biennale MArteLive 2022, with “Autumn” (La Mask production) of which he is director and interpreter, alongside the dancer Chiara Mameli. In the Visual Arts: Sara Argiolas won in the Photography section, Francesco Cogoni for Sculpture, Damiano Rossi for Painting and Matteo Tauriello for the Graphics / Illustration section. A lucky debut was for the writer Dario Mameli, who won in the literature section with the short story “Tomatoes Mon Amour”. Winners in Cinema was the short film by the Artists Fuori Posto “Boredom” and in the Videoart “Pareidolia” by Elisa Meloni. Finally, in the Fashion section, Claude Couture Creation and Madelyce won: the three stylists Claudia Cinzia Atella, Emanuela Vacca and Alice Manunza enthused the public with the creations worn by them and by young models. The Guest (not competing) of MArteLive Sardegna 2022 was DJ Pille (aka Daniele Pileri) who created the soundtrack of the event, accompanying the writers’ readings and further the musical selections that animated the Foyer.

The ten winners will represent Sardinia in October at the national and European finals in the MArteLive Biennale, with almost 1000 guest and emerging artists from the various disciplines competing for over 150 prizes, distributed in 16 artistic sections. After the end of August, when the picture of the finalists from all the regions will be complete, it will be known whether further “repechage” will be possible for the benefit of Sardinian artists. In Rome, for the Biennale MArteLive 2022, about 300 shows are planned including concerts, performances, theatrical and dance representations, projections, installations, readings, street art and DJ sets in the suburbs, videomapping of monuments, and much more.

One of the most interesting events of the festival were also book presentations of the authors such as Joanna Longawa and Matteo Porru led by an amazing Giuseppina Ragucci, professor and cultural animator. All this is possible thanks to the artistic activity of both Sardinian theaters: Abaco and Impatto. Their activity is essential for the island and thanks to them Sardinia is not only beautiful in its natural landscape and sea, but also its culture and entertainment.