THE GREAT SPANISH CONTEMPORARY PAINTER DESCRIBED BY HIS SON 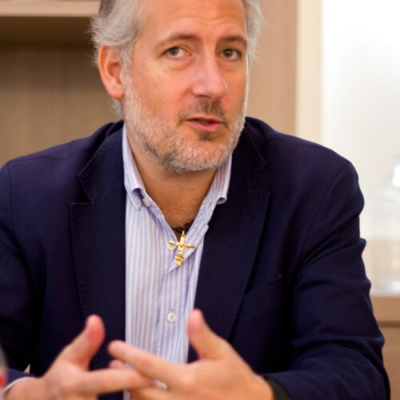 The De Vargas Fondation was founded in 2011 as a private initiative promoted by his family, members of the patronage of a great contemporary painter Ramón De Vargas. The artist born in Guecho (Bilbao), Spain, in 1934, took a serious look at painting in adult age, during his studies in Architecture in Madrid. De Vargas is famous as a pioneer of experimental and violent painting mixed with other arts: cinema, sculpture, video, architecture, photography, literature and music, and characterized by a dramatic line. The fascination for the work and the person of Ramón De Vargas in the world is still very strong. His works were exposed in various countries (France, Switzerland, Brazil, USA, Italy, Germany and etc.) and now, thanks to the Fondation, every year conquer new fans.

What we haven’t said yet about Ramón De Vargas is also his experience in the world of jewels. He has been working for many years in a jewelry workshop where Portable Sculptures idea and jewelry in gold, silver and rhinestones were born. This work was a new concept of sculpture jewelry, after that many others tried to imitate him. An other curiosity is that, despite the violence of his paintings, two of them, were acquired by the Vatican Museum: “Las Beatas” {The blessed} and “El Entierro del niño” {The Burial of a boy}. During his career he won many international prizes, medals and awards in France, Spain, United States, Italy and Belgium. His works can be found not only in Rome but also in Rio de Janeiro Fine Arts, Winthertur, Spanish Contemporary Art Museum of Madrid, Beaux-Arts de The Ville de Paris, Wiwona School in U.S.A, Art Museum Contemporary of Bilbao and many more.

Pablo De Vargas, President of the Fondation and De Vargas’s son, interviewed in Madrid by Joanna Longawa for JL Interviews, talked about his father, his entire work and life, with unmistakable emotion. “We can’t forget great people and great artists who have appeared in our childhood and in our maturity, such as Venancio Blanco, Vázquez Díaz and many others”, he said. “Throughout all these years, I, my brother and four sisters, have learned to value and respect the work of each artist. There are many ways of expressing feelings and emotions, but without a doubt, art is one of the most complete and complex. And so we will strive to spread the work of Ramón De Vargas and other artists”- his son explained the genesis of his father’s fondation.

How is the De Vargas Fondation organised and does it only promote your father’s works?

The Fondation was created in 2011. It is very young. The reason for creating it is to promote the work of my father, by organising exhibitions, and to promote the work of other painters. We have a lot of exhibitions in Spain and Italy, we create press opportunities and we follow other artists. The Foundation promotes my father in all his work: his painting is his best known work but also sculpture, photography, experimental videos. The Fondation is organised in such a way that the founder is my father. It is a family business, we are all involved (all family) and there is a secretary. I work on organising exhibitions. Also what we do is catalogue all De Vargas’s works and the works that are now owned by my father, two thousand five hundred paintings, are cataloged. We do not have all his work yet because much is around the world or exhibited in many museums.

I imagine it is quite difficult to speak about your father’s art, so various and vast but, as his son, how would you describe his style?

The style of his paintings depends on the time of his life and we can divide it in many periods. Years 50/60 – the dark ones, black and white, strong lines, complex and figurative, are the first. At the beginning in Bilbao life was very difficult. There was terrorism and the Spanish civil war in northern Spain. The family moved to Cordoba in Andalucia, his father had land and that was a big contrast for him: before he lived in a wealthy area of Bilbao and then in the poor part on the south. That was why we find great contradictions in his art and in this period on his canvas humans do not look like humans. Years 70/80 – his life was more stable, he evolved, he was not figurative at all but he began to use more colors, more portraits but always his move of the brush is characteristic, aggressive and dramatic. As in the painting “The Bride” from 1972, it has its dismal character. Lots of the works from this period were exposed in Miami. I have always thought my father was a relevant painter: contemporary and innovator, precursor, master with a different style. He has always been protective of his work, does not express many feelings and he doesn’t like to share his special vision. He is a person who gets in his study and isolates himself and brings out what he has inside. I’ve seen him working for hours. He was always learning new techniques. His work, undoubtedly, has a very personal imprint. 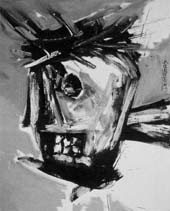 Which words characterize him the best? What makes him different from other artists?

The words that characterize him are Innovation, Variety, Dramaturgy, Contemporary, Expression, Strenght and Experiment with new materials and new disciplines. He is a natural talent. He studied fine arts and did not finish because he felt a true artist’s voice. He did not have any teacher and was not influenced much by others. He had contacts with other artists as friends not as teachers, especially in Paris where he lived for a long time.

How was your childhood with Ramón de Vargas? How has your father influenced your way of seeing art?

Everything in our life was branded by our parents, we have known the world of art since we were little. Our father had his studio, we could enter there but he did not like it much. It was his refuge where he created. He is a hard worker, who like to work, often at night. He had many interests and used to spend a lot of time reading, listening to the music and talking a lot with us. He had a clarity of mind, but was driven and passionate while working. On the other hand, at home he always gave us guidance, advice and lots of love. He taught us to take decisions about personal and professional life. As I said, at the same time he was very hands on, closed in his world but he helped us. None of us have inherited painting and art from him. I draw terribly, my brother paints for pleasure but not professionally, he has not followed my father.

Which of works or series of works do you consider a breakthroughs in your father’s career?

I think the most important are his works of the 80’s that characterize him more (more forceful) and those from his youth, more breakthroughs of the 60s when he married my mother in 60s, he was very young. He was not a typical artist. He was a family man and a Christian.

Your father said: “It is no coincidence that almost the only subject of my paintings is women, with my works I try to catch what I desire”. What vision of women emerge from the pictures of your father?

He admires women. Indeed, in many works women are his models. They are an  important part of his life, the series Eva is well known (the name of biblical Eve). He was not sexist, he idealized women. With this way of thinking he was breaking barriers. My four sisters studied and traveled. He  always encouraged them to do that. He was open-minded. He speaks German, French, English, Italian and likes philosophy. He has always looked for the origin of everything. Each one can live his art and interpret it in another way. Each work is a mixture of tenderness and aggressiveness. 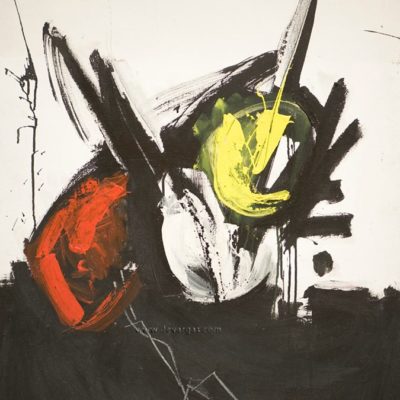 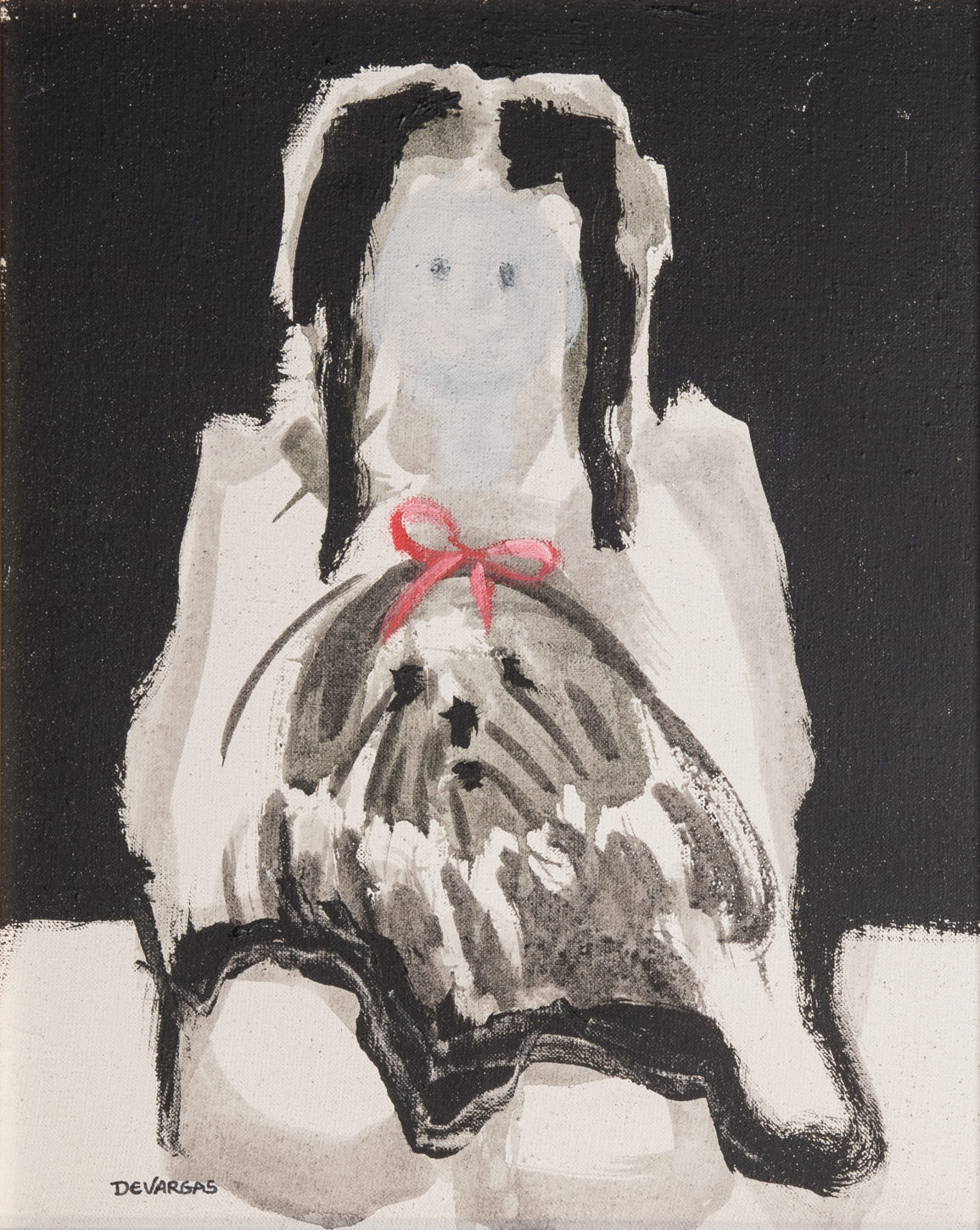 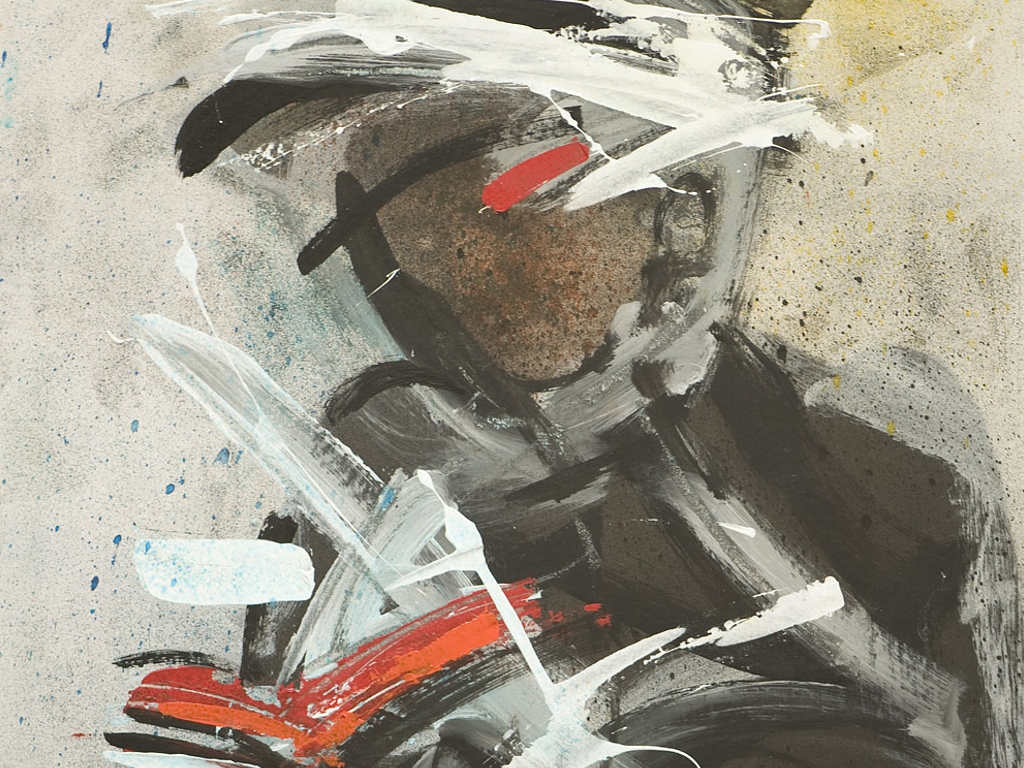