NETFLIX “FIGHTER” DIRECTOR ABOUT HIS FIGHT FOR SUCCES 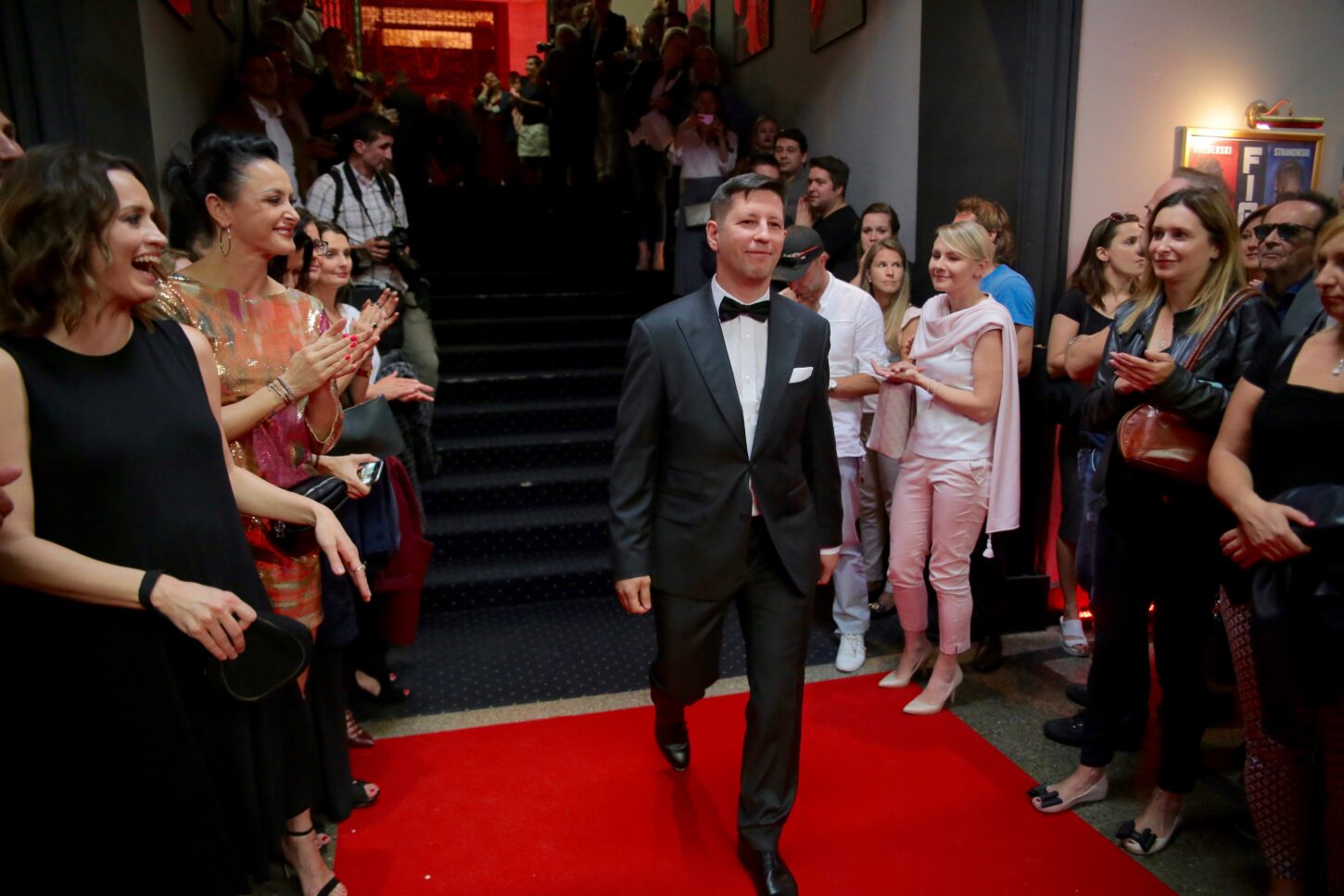 Konrad Maximilian (Konrad Max) moved to the UK in 2005 to pursue his dream of becoming a film director. Not everything went as he planned and it took longer than he imagined but, after a few years, he was accepted by the University of Westminster for MA in Film Directing. Unfortunately, he was not able to carry on with his studies as he dcould not afford the university fee. He continued working to achieve his goals and in July 2013 achieved the Director’s Diploma in Raindance film school London.

In 2015 he directed and co-wrote with Tomasz Maziarz “Forge of Heroes”, a documentary about Polish soldiers trained in the UK during the Second World War. At the same time, his daughter was diagnosed with autism, and from films his priority became to helping her. After few years he had the opportunity to make a movie in Poland, and, finally, in 2019, his first feature film “Fighter” was released, and was a success. The movie was produced by Domino Film www.dominofilm.pl and distributed in Poland by Kino Swiat www.kinoswiat.pl.

The “Fighter” was released across theatres in Poland. Furthermore, the movie was accepted at the Polish Film Festival in Gdynia 2019 and the Los Angeles Polish Film Festival. Now we can watch it on Netflix. Konrad, no doubt, in life is a fighter like his movie hero, a fighter for his daughter and professional success. He said to JL Interviews that telling stories is essential in his life. “I like to watch the hero change and the audience change with him. This is what makes me create movies”. And this is what makes us watch his movies. You will find more about the Polish director at www.konradmaxim.com.

How long has your adventure with the movies been? Why did you become a director?

My adventure with film began when I was studying at the Faculty of Architecture of the Wrocław University of Technology. Then, together with Marek Jaszkowski, we decided to make a short film based on the script I wrote at that time. This is how the short film “Operation Monument” was made. Shortly thereafter, Tomasz Lewandowski, then a stuntman and operator of action scenes, joined my team. We created an interesting group of bitter amateur filmmakers. It was extremely difficult for us to break through in Poland, so we decided to try to get into the world of film by various routes. I went to the UK to get into film school there. Marek started working at ABM in Wrocław, years later he became a director and worked on series in ATM in Wrocław. Tomek grabbed the camera, the stuntman, and now you can see him in many Polish, and not only, film productions. I obtained the Director Diploma at London’s Raindance. I saw both of them again on the set of “Fighter”. Why exactly I decided to direct? It is simple. I love telling stories. I like to watch the hero change and the audience change with him. This is what makes me create movies. 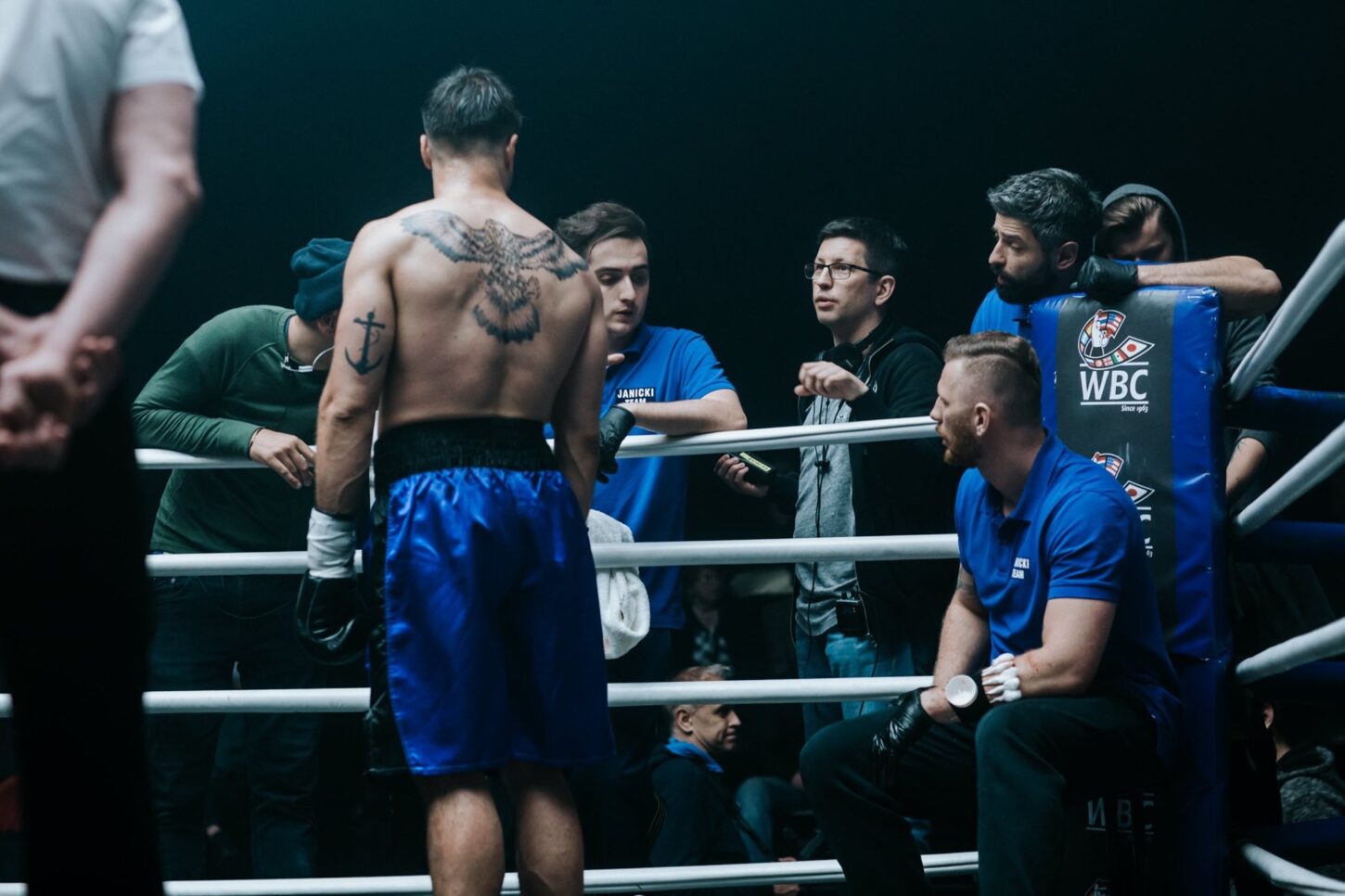 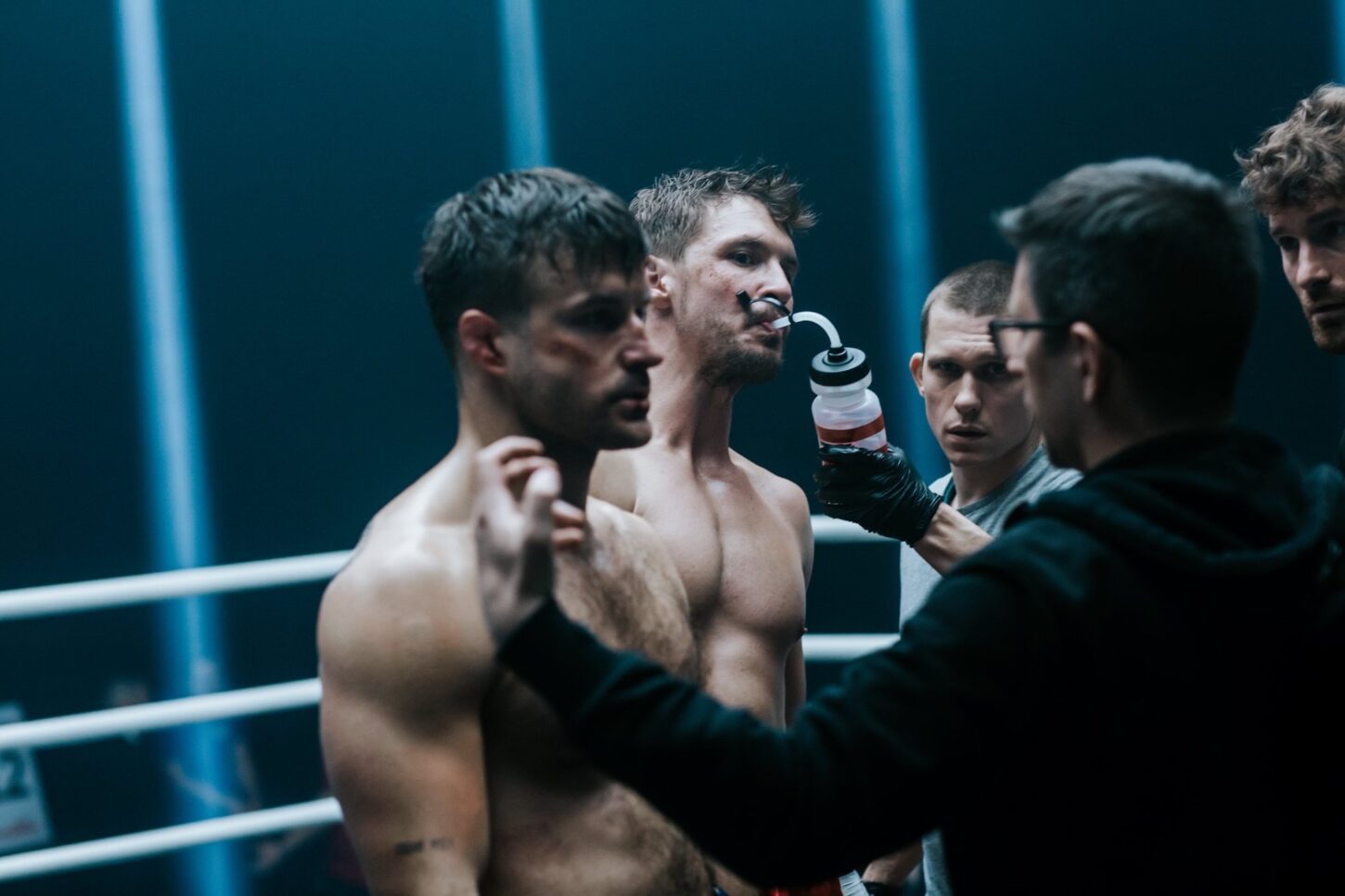 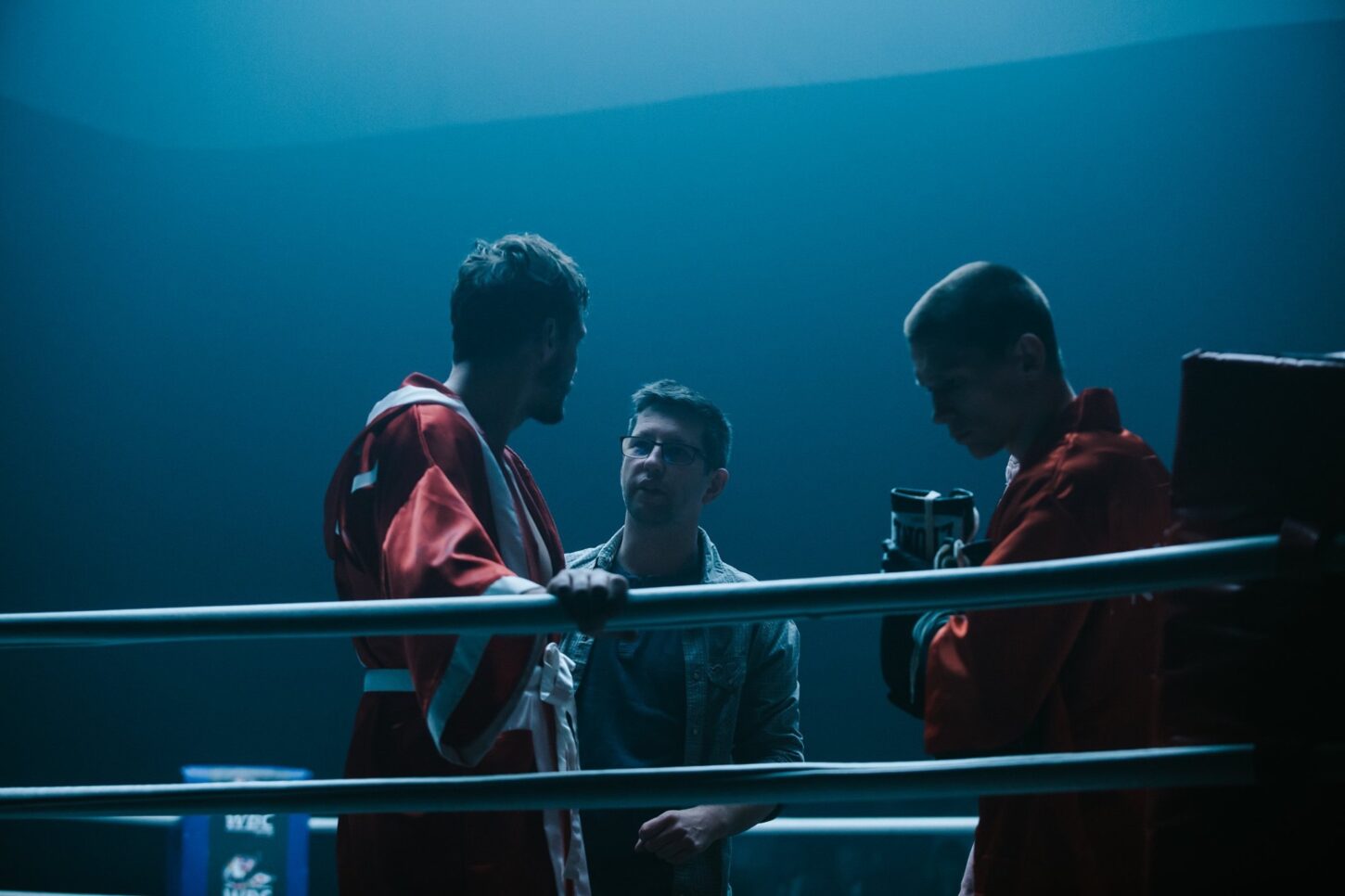 Why did you choose to move to London? What is missing in Poland in your sector?

I went to study to London and fell in love with the city. London is the whole world in a nutshell. Stories here build themselves, at least in my head. I took the subway a lot and once I saw an interesting situation and that is how the script of “The Long Con” was created. On the street. I met a girl who was playing an electronic piano and after a short conversation I came up with the idea of ​​a story that turned into the “RoY” scenario. This city inspires me, makes me want to write and create. This is one of the reasons why I never gave up. Constant hunger to create. Poland is a different world. Different people, different culture and different stories. I am not saying that Poland is better or worse, it is just different. It is the same with movies. We have great filmmakers, many of them have made and are making great careers in the world. However, the Polish film world is very conservative. I’m not talking about politics, but about cinema. This is due to market requirements. The vast majority of Polish films are aimed at Polish viewers. Film budgets are relatively low because the number of viewers in Poland is much smaller than, for example, in the UK and the USA. There markets are much bigger. As a result, film budgets are larger and producers taking on non-standard stories risk much less than in Poland. So what is missing in Polish film… money for films.

How did you spend your quarantine? Was this period of time encouraging for you? How has it changed your life? Where did you spend it?

I spent my quarantine in London. It was the first time I saw this city empty. It was an amazing sight. I went with my camera to the city center, to the most crowded place, at an hour when it normally takes ages to walk a hundred meters and I did not see a living soul. I immediately thought of the movie “28 Days Later”. The quarantine practically wiped the film industry off the face of the earth. Everything stopped for more than three months. All the conversations I had with the producers ceased. There was silence. So I did what a person with excess time and ideas does in such a period. I grabbed my laptop and started typing. So my life has not changed much, I just had more time to do what I like, write scripts. Two texts were created in that period, with a bit of luck, we will see its on the cinema screens one day. After the quarantine, I managed to resume talks with one of the British producers, but it is early talks and anything may still happen.

Your latest movie is “Fighter”, which came out on Netflix (2020) is a great success. Were you expecting it?

I cannot say I expected it or not, because I never really thought about it. “Fighter” entered in Polish cinemas in the summer of 2019 and the Netflix platform in 2020. It immediately climbed to first place in Netflix’s Top 10. Producers from Domino Film sent me a photo of the ranking and wrote only one word: “Divine”. I admit that they made me feel better. For me, it is a really nice feeling that someone appreciates my work and dedication, not only mine, but of the entire team and my great actors. Stories are made to be watched, so I really enjoy others being interested in my films.

What new movies are you working on now?

Currently, I have three screenplays that I am focusing on. I am in very preliminary talks with one of the UK producers about one of these screenplays. But it is still a long way from talking to photos. The Coronavirus may be the biggest obstacle. The coming second wave could shut down the movie industry again and that could frustrate my plans. So we’ll see what tomorrow brings.

How would you describe the type of cinema you do? Would you like to experiment with genres in the future?

“Fighter” is a sports drama. The next videos will be in a different direction. I am not bound to genres but to the story. If the story is captivating or surprising, the genre does not matter.

Which actors do you work best with? Are you a demanding director for them? Am I a demanding director? This question should be addressed to the actors. I like actors who want to explore the character with me. When I first draw my vision of a character to an actor, it is an image, in which I intentionally leave gaps. I want the actor to delve into this character and start to rediscover it himself. I like when the actor is searching and experimenting. They come back to me and discuss, try to convince me of their point of view of the character. It allows me to reconsider my own vision, and sometimes rediscover a character. On the other hand, when I see that the direction the actor is taking is not good for the project, I simply say, no. Then I direct the actor to my direction that is best for the project. In this case, we start the whole process again until the character that the actor is supposed to create finally comes to life. Working on set is just an execution of this process. This is how Piotr Stramowski and Gareth Lawrence worked. There are also actors who prefer to get detailed instructions from the director. Both methods are fine as long as the end result on the screen is convincing.

Do you have your masters of cinema, authorities that changed the path of your life or your view of the world and cinema?

The cinema has already seen many great directors around the world. Federico Fellini, Stanley Kubrick, Alfred Hitchcock and Krzysztof Kieślowski. I intentionally do not mention living directors here. However, my favorite is Akira Kurosawa. The way he builds stories absorbs the viewer. Camera work, characters, light, everything thought out in every detail. But it was not the director that made the biggest impression on me, but his individual films. I have seen Kurosawa’s “Seven Samurai” many times. How good this story is! Its pattern is repeated in cinemas all over the world, from small independent productions to large film studios, everyone draws from it. Another movie that formed me was “Leon the Professional” by Luc Besson and the way he led the relationship between Leon and Mathilda. Not to mention the amazing Gary Oldman. His toilet scene at the police station is a masterpiece of acting. The “Boondock Saints”, directed by Troy Duffy, also is an incredible story with an even greater supporting role by Willem Defoe. I also love “Matrix”. This film changed people’s perceptions of the reality we live in. I remember sitting with my friends in the pub after leaving the cinema and we were arguing for hours whether the assumption that we live in the “Matrix” might be true or not. Such abstract conversations strongly build human imagination. They allow you to develop and see the world from different points of view.

What’s your favorite scene out of all the scenes you have done so far?

This is probably the final fight scene in “Fighter”, and the moment when the main character leaves the ring after losing the fight. We shot the entire exit from the ring in one shot, thanks to the cinematographer Piotr Uznański, who invented the entire movement of the camera in the last shot.

Woody Allen said, “The only regret in life is that I am not someone else.” Do you regret something?

Life is like a box of chocolates. My only regret is that I ate the wrong chocolates.