At the end of March, 2015, Italy hosted IS TROPICAL, a very successful London-based indie-electro band, known especially to fashion lovers for the song “Galactic Lover”, broadcast during the show Men Collection AW14 James Long in Milan. In this occasion I met them for the first time in person (still in the original members) in Rome and two years later interviewed for JL Interview, this time online, from the UK studio.

The year 2015, as they said, was a crucial year for their future. They released a new original album BLACK ANYTHING, that was a kind of revolution in the global music market and beyond (“fully” out since March 11th on Axis Mundi, but which the band has been releasing in 5 installments of 2-songs) and they officially annouced, as a full-time member, an adorable and very talented vocalist/frontwoman, Kirstie Fleck.

Is Tropical in the “male” past liked to shock with their videos. Their the most watched videos were “Dancing anymore” and “The Greeks”. At present their style changed a little bit. The songs run the gamut from tropical electronic rock to pensive dance-punk and seemingly spiritual noise pop. True evolution. Is this Kirstie’s merit? This year they are on tour in Europe, in the UK, Germany, Belgium, France, Turkey and again in Italy.

Your new album “Black anything” has behind it a concept. What is it?

We didn’t want to be locked in a studio with no natural light for a month like the first two album sessions. Our new songs were heavily inspired by our travels around the world, so we decided to record the album around the world. We’re releasing the album in 5 parts, on 5 clear vinyls with parts of the globe printed on them. If you have all the vinyls and stack them on top of each other it forms the world. We recorded the first 2 songs in New York after building a studio there with our new label Axis Mundi. Then Europe, South America, Africa and Asia. It’s a very interesting project for us.

From December 2014 we can listen to your new two tracks “Crawl” and “On My Way”. Which song of yours for now is your favorite to sing and play live?

It’s always fun to play the new tracks, work out how to make it sound best live. On My Way was hard to sing in the studio because it’s high but we all are very surprised that it’s easier live. As we’re on our 3rd album and have a few EP’s we can’t play all our songs live, so it’s also fun to start playing the old songs we haven’t played in years.

Last time when I met you in Rome you were a male trio. In your new album “Black anything” you are supported by a sexy female voice of Kirstie Fleck. Will she stay with you forever?

She’s in now, it’s gone too deep. She was always a member of the band in a way, she was there while we were living together and writing demos for the first album, she was the one that heard us talking/inspiring each other/arguing for the last five years, she’s seen the best moments and the worst ones. It was a logical thing to add her as an ‘official’ member of the band. And her voice, you’re right, is amazing – it’s bringing a new and exciting dynamic to the songwriting and it’s something we are fully exploring on this third record. There’s also been a great response from our audiences, they can tell she is one of us, the gang has embraced her as the ‘good looking one’ and we needed that, as we’re starting to get appearances on TV now. (laughing)

What is your big aim for 2015? Are you planning some special event, travel, performance for this year, of course aside from the promotion of the new LP?

We’re looking into moving out of London and into mainland Europe, Belgium or France maybe. A lot of touring is coming up and we still plan to visit countries that don’t often get UK bands. 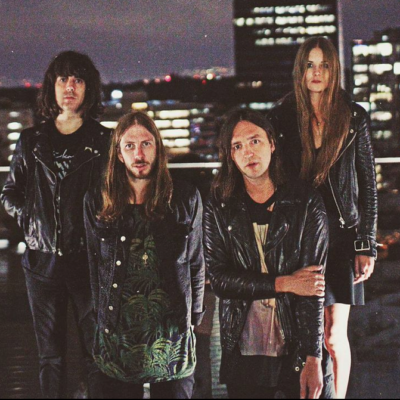 You are very British but at the same time you are very cosmopolitan. What are your good and bad sides?

We’re away from home more because this excites us, being in a British band you get a warm welcome abroad. England has a rich history of music so people trust it’s export. We love travelling so much, the only downside is the people you’re always leaving behind, plus paying rent when you’re not home.

You’re travelling a lot and thanks to that you’re famous even in Mongolia. But when you finally stay home… what is your normal day, if you have a normal day?

London is always busy, every night there are 100’s of bands playing. So we’re hanging out with musicians a lot. Also the area we’re in attracts creatives from all disciplines, it’s good to work on different projects with artists, fashion designers, director and designers. Try to relax but it’s hard to rest.

This year, after numerous concerts you were back in Italy again (5.05 in Turin and 6.05 in Segrate). Do you miss Italy and the Mediterrean climate?

Yeah! It feels like it’s been ages since we’ve been in Italy. We will have our good friends MT with us, supporting as well, so for the first time bringing a bit of local flavour to our show. Covo club is a great venue – last time we played there were people climbing the walls to get a view. For sure we’re excited about touring far and wide with the release of ‘Black Anything’ and we will be adding more dates to many of these countries as the summer approaches.

How about other countries to work in and to have holiday at that you feel like home?

To be honest, we feel at home anywhere. All we need is periodic access to hot water, and internet. Being on tour makes you appreciate life on the road, and appreciate the hospitality that people offer you. Some places are a bit harder to settle into than others, for sure, but it’s the similarity of travelling and being a band on tour that makes the whole thing feel romantic sometimes. Talking shit with a hangover, learning how to queue for the passport control with your eyes closed… things like that. So far though, our favourite ‘holiday’ countries to play, are China, Japan, Canada, and South America (anywhere).

I remember you gave importance to the black colour in your look. This time “black” marks also the name of your LP. Who chose the name and why? What does it mean?

It was a name which came out of the recording sessions – we needed something which defined us, and embodied the common element through the various international recording sessions we put in while making this album. Black Anything represents the dystopian, black, sweat-lined rooms we feel truly at home in – it’s the black moments we feel the most comfortable with, when you’ve lost yourself for a second during a show, or blacked out in a bush or house party afterwards. It’s the black we all share when we close our eyes; the album is a soundtrack to that common space. Black also has the indirect advantage of appearing the least soiled after a few days of staying out and going insane. Black is also very warm, wrapping you up in it’s light absorbing powers. Black flags, black magic, black holes, whatever.

You have gained a reputation as “globe-trotting gallivants” and “partyholic skedaddlers”, travelling from continent to continent to demonstrate your indie – electronic shows. Is new album a product of these experiences?

Yes, that’s exactly what it is. We wanted to change the process of recording an album to something which represented the way we get inspired to write and record music through the lifestyle it’s thrown us into. Five recording sessions across five continents, incorporating the ambient sounds and atmospheres of the places we find ourselves in, letting the time and place pollute and affect the music. Instead of waiting six months and spending time in a cramped basement room in London, trying to remember the phenomenal feelings that gave birth to a song, we’ll put it down there and then, even if there’s a woman asking you what you’re doing or trains going past or ridiculous weather.

What instruments did you use this time in “Black anything”? Are there some new sound experiments? Is your music changing, going to some new direction?

I think our music is always changing, just because the stuff we let affect us is evolving and changing as time goes on. We are very different people than we were when we wrote the first album – but there’s a common element, too – the direction is something that results from being a product of the time and space you’ve been given to. Probably every gig we’ve played has shaped our sound, but in imperceptible ways that find their way into the live show, and the small nuances that songs inherit after playing them by rote and without thought, beyond even muscle memory. We still take stories and anecdotes and inject them into our lyrics, I think lyrically we are still quite weird actually – and musically we have embraced a naivete we were struggling back and forth with until now. There’s a raw energy we are all familiar with, and a pure intention which has never changed but only been made stronger by the real consequences our music has had, the fortune and misfortune, and the many conversations with half-closed eyelids that our audiences have initiated.

How could you summarize your music evolution so far now? How do you see your band in a few years? The publication of your new album will be divided in five parts, each of them will consist of two digital and vinyl 10” tracks. First pair is “Crawl”/”On My Way”. Is it a preview of what we will listen to in the whole album?

I think that each part will stand on it’s own, which is something we intended. We also wanted each vinyl, and the songs on it, to carry some of the atmosphere and feeling of the place it was recorded in. The album is also something which will change as people slowly discover it, and so the reaction to that is something we are looking forward to reading about, instead of dictating. Let us know what you think on March 8 when Part Two drops. And buy the vinyl for your children, because computers will have become sentient and left us to inhabit Eigenspace beyond our paultry 3D reality-prison. Sorry I think I just had an acid flashback halfway through that answer.

What are other particolarities of your new LP? How do you remember work on it?

We remember it as an ambitious, scary, complicated process which caused us stress and joy, laughter and tears, flights and brainlessness and transportive inspiration. It was a long process and a masochistic one. It was a ritual in breaking down what made us comfortable about making music and exposing it all to the light and sound of the world in it’s many forms. It is a mirror held up to the people who helped it happen, including Axis Mundi Records, founded by our good friend and patron Graham Dickson of Crystal Fighters. We are looking forward to hearing the other music on our new independent, total freedom label, the next one being a great band from the States called Psymon Spine. Shout out!

You are loved and followed in all continents, especially in Italy, the UK and Mongolia but what is your favorite music? Do you have your idols?