David Sye, Frankie Vaughan’s son and well known British musician, singer of No Mad Karma and King Hippy bands, after strong experiences such as serious illness, meeting with Mother Theresa, he survived the war in Bosnia and more recently witnessed the tragical death of his famous cousin, Amy Winehouse, his experiences have been life changing. David has been saved by Yoga where he discovered magical benefits and also how to reject fear.

Today David is a founder of Yogabeats, presently one of the most appreciated Yoga masters both in the Uk and Worldwide. His mission is to spread his teaching and love theory worldwide. According to Sye, Yogabeats is more than just Yoga, it is pure fun, a practice driven by music and rhythms, it creates tremendous vitality, balance and flexibility.

Sye’s big dream for future is liberation for all cultures using Yoga as a movement for change. As he said to JL Interviews magazine, in June, 2016, in an online connection from Milan International Yoga Day (Italy), Yoga brought him into a „higher experience of aliveness“ and showed him a path towards happiness. In this interview David Sye explains how.

You are a son of legendary 60’s entertainer Frankie Vaughan and Amy Winehouse’s cousin. You have always been sorrounded by music. How was your childhood and how your family influenced your life choices?

Yes, I guess I was influenced by having been part of a travelling show of entertainers for a great deal of my life.

In many interviews you talk a lot about fear, so powerful feeling in human life. Was it the fear of something that pushed you into the direction of Yoga?

Yes, I had fear of remaining in the sickness that had plagued me since an early age and which also led me to search for a spiritual and later on I learned, having survived the Bosnia War, that fear is just an illusion and that if understood and transcended it always leads to total personal liberation.

How did you learn about yoga and what does it mean Yoga for you?

I learnt it from Tibetan Yoga. I discovered it because, as I said before, I was suffering from a spastic colon and a variety of bowel complications including ulcerated colitis diviculitis etc. Yoga first brought me into an addiction of my own consciousness, in other words, brought me into a higher experience of aliveness.

Why is so important for human health and does it guarantee happiness?

Yoga affects the entire psycho-psychical dimension of a human, it guarantees the path towards it.

You have been travelling a lot. Where has been the most important? Where did you meet your spirit masters?

The most important journeys were the ones that lead to love. My spirit masters? Where ever love showed up.

You founded Yogabeats in London. You write on your website that your yoga is funny and sexy. What are David Sye’s rules of Yoga ?

The rules are simple: to be more of who you truly are! Never to deny any internal feelings from anger to sexuality to express that which remains toxic or hidden. That is why Yogabeats leads to rapid individual healing and transformation.

A curiosity about your cousin Amy Winehouse. What was her Karma? Were you close to her in that dark last period of her life?

Amy’s Karma was exactly the life she lived and yes, in a way I was close to her.

It’s been seven years since Amy passed away. Did You knew her all your life? When you think of her, what portrait of her do you keep in your heart? How do you remember her?

When I think of her I think of an eternal romantic expressive girl who just didn’t receive, in my opinion, the love and human nourishment in equal proportions to the fame that she needed to cope with .

Amy’s last album Back to Black was the second-highest selling album in the world. Which one of her songs do you consider a true masterpiece and why?

Black to Black. It was the song that encapsulated and summarises Amy’s personal dilemma of connection. 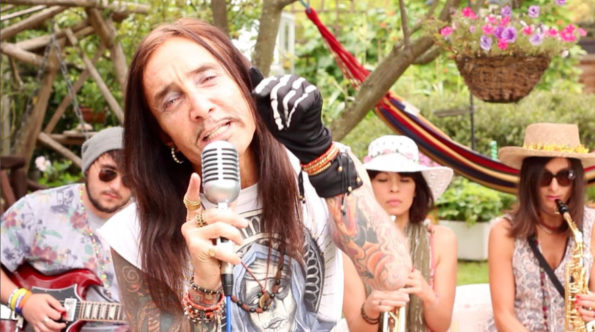 Your body is full of tattoos. What do they represent ?

Each one is a celebration as a practicing pagan of having survived different life changing incidents during the Yugoslavian War.

In the former Yugoslavia during the war you were a DJ in Belgrade running a new radio station. How would you describe this experience?

This experience completely changed the entire direction and meaning of my life.

As a DJ/Reporter you had occasion to talk to Mother Theresa. What did she tell you? Did her message change you somehow?

She told me that people must love one another as god loves each one of them. Yes, it confirmed during the high of war that love, not aggression, creates any real lasting changes.

You are a very wise man. You transmit positive energy and help people. Where do you go or what do you do when you try to bring peace and make people forget about everything?

Peace begins within oneself. It is an internal question and so the first place to make peace with is with oneself.

We haven’t talked about the music yet! How are your music projects connected  to your life?

My music project and my life, and my Yoga, are inextricably connected!

Could you tell more about your project King Hippy? What is its genesis?

King Hippy is a multi faceted music project. It captures the truth and spirit of eternal bohemians: free thinkers, hippies who have existed throughout all of time. Our first mission is to bring this world through sound vision and performance to the world.

With your band No Mad Karma you wrote a song 27 as attribute to your cousin. What is exactly this song about?

The song is about the loneliness of these highly sensitive individuals like Jimmy Hendrix, Amy etc. It says how they had a community but little loving support for them as humans rather than stars.

How would you describe your mission? What would you like to do for others?

My mission is to accelerate the use of Yoga worldwide as a transformational tool creating loving supportive communities everywhere on this planet. Secondly, I would like to replace the present perception of Yoga as an empty ego fashion statement.

What are your dreams for the future? What would you wish for our world?

My dreams for future are liberation for all cultures and people living presently under threat, for example the first Americans (Native Americans), the Palestinian nation, the Tibetan nation amongst others and to use Yoga as a movement for change. We have to be activists in the evolution of our species and be a major player in taking our species from homo sapiens to homo spiritus.