ITALIAN ACTRESS, SOON IN NETFLIX, TALKS ABOUT HER “CALIFORNIA DREAM”

Antonell Salvucci is an Italian TV presenter, model and, first of all, actress. In Italy she has played several leading roles in films such as The Sentimental Education of Eugenie, directed by Aurelio Grimaldi, and in minor roles in others like The Torturer by Lamberto Bava, The Family Friend by Paolo Sorrentino, The Night of the Sinner by Alessandro Perrella, The Red Dot by Marco Carlucci, The Anger by Louis Nero, and Red Riding Hood by Giacomo K. Cimini. Recently we saw her in the thriller Midway, between life and death directed by John Real, Since then she began an artistic collaboration with the same director, together shooting a movie in English entitled The Carillon and the TV series which will be released for Netflix called Age of the living dead- the Rising.

She has also appeared in American movies, shot in Italy, for example The Voice & the Diva directed by Michael Oblowitz, The American Connection by Jeff Espanol, and the TV series, still in production, Enforcer directed by Don Maxwell of which she is also the executive producer. She has just finished shooting, as protagonist, a pilot TV for the international television circuit entitled Shelter, directed by the talented Carlos Bido. She is about to start shooting, in Spanish, a new musical film I want to be a star. In 2000 she recorded the dance song “Fever”, afterwards she debuted in 2004 on stage in the musical comedy Vampires directed by Bruno Maccallini. In 2008 she became the heroine Lara Croft in the musical play Pulcinella directed by Lino Moretti. “I love musicals”, she told JL Interviews.

Regarding TV work, Antonella, for many years, has hosted Ciak si gira, a TV show dedicated to the world of cinema, interviewing the most important international actors and directors. She has presented all of the “FantaFestival” editions with such prestigious names as Murray Abraham, Roger Corman, Dario Argento, and all editions of Rome Film Festival with Giancarlo Giannini, Lina Wertmüller, Abel Ferrara, and Willem Dafoe. On Rai 2, she has also hosted a new TV format called New Stars at Night, dedicated to new Italian talents and at Rai 3 she presented “The Flaiano Award” dedicated to literature, cinema and television and other prestigious movie awards in Italy and abroad. Antonella is a beautiful multitalented woman ready for new challenges: “Follow me and surprises will not fail”.

You are an Italian Tv presenter, model and actress, now based in Los Angeles, in California. Which role, in Italy or abroad, was crucial for you?

Certainly every role allows for professional and human growth. For me, for example ,having participated in the series “Marshal Rocca” and having known two “mostri sacri” (legends) like Gigi Proietti and Stefania Sandrelli gave me so much and made me fall in love again with more acting. Being directed by a creative person like Jose Maria Sanchez made the difference.

How could you describe your work adventure with Paolo Sorrentino? Did you learn something from him?

Working with Sorrentino was the most beautiful and surprising thing that could have happened to me. Actually it was I who looked for it. I met him casually several times until one day he told me to send my material to production. After that I drummed up my courage and introduced myself in person, he was struck by my sympathy and originality and he became intrigued to the point of supporting various auditions. Seeing him behind the camera was pure magic, a visionary and precise talent that immediately revealed what would later be the great world recognition. Working with him on the set was so fluid and natural, every scene enchants you because it brings with it that bittersweet taste and the idea of ​​the typical dream of our past cinema that has made a mark in the world. He taught me something important when he said: if you were not worth something, you wouldn’t have lasted in this environment.

What do you think about Italian cinema? Is it still great as it was in the past?

Italian cinema has immense potential and then there is a host of new recruits, not only directors but also young producers, who manage to bring to the big screen simply true, innovative ideas that are an expression of these times and of what they live. They really experiment with Monicelli’s style where he didn’t alienate himself from life but rather immersed himself in being able to bring back those universal stories to identify with. Living in America I also often, I have the opportunity to love and appreciate the Italian style of making films even more because maybe Americans have great means, special effects, sensationalism, but we have a lot of heart, which  is how we can give the world enjoyment. 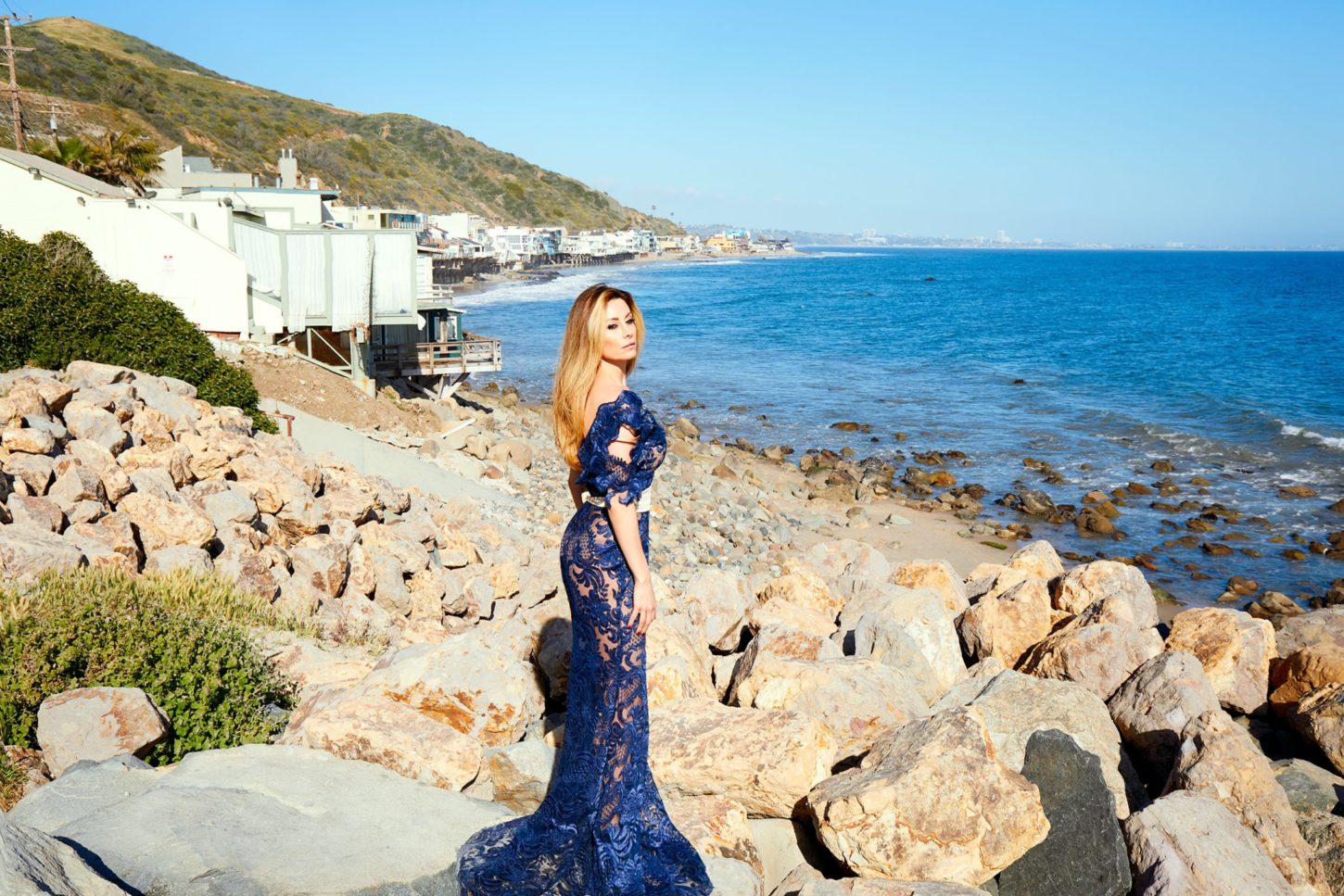 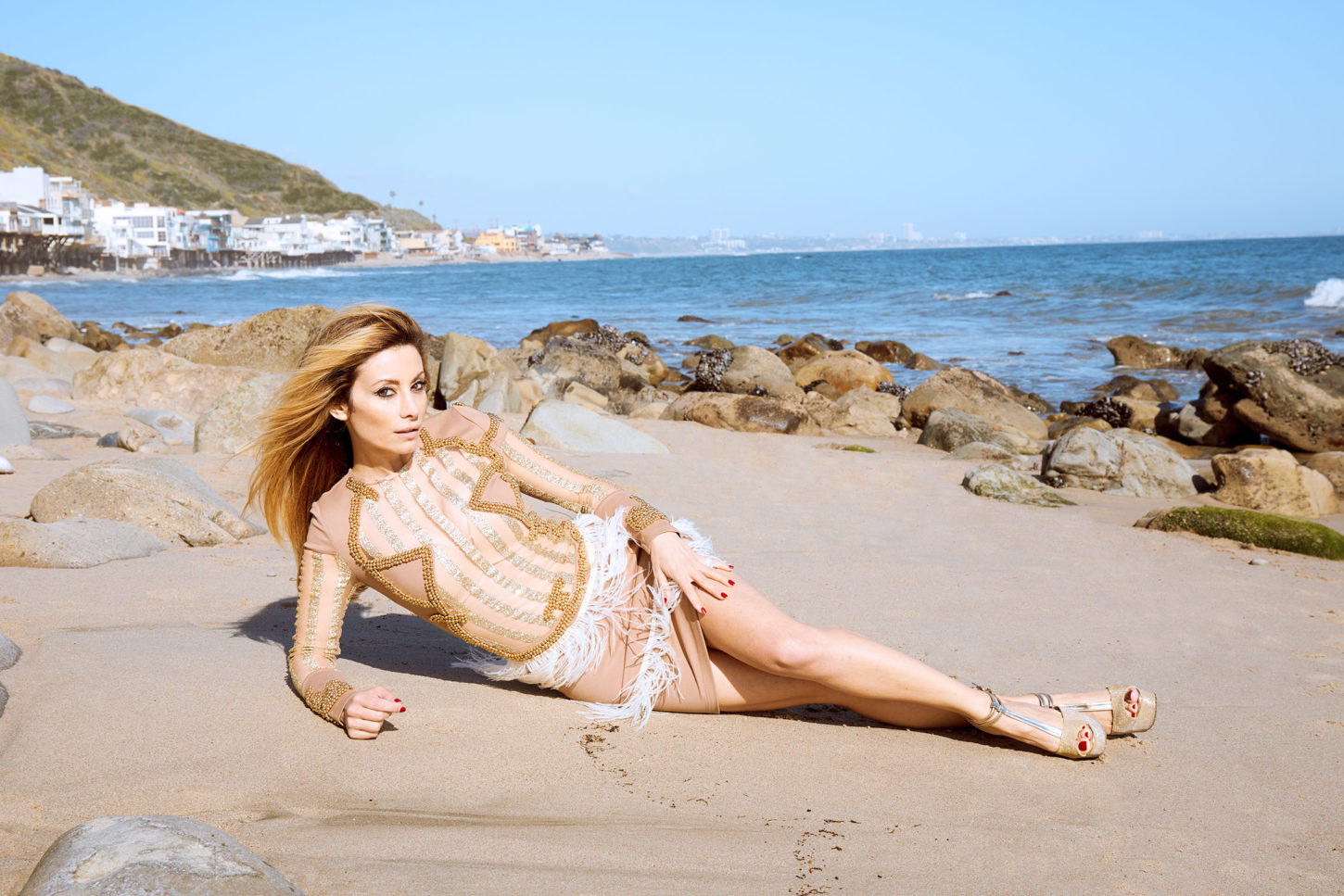 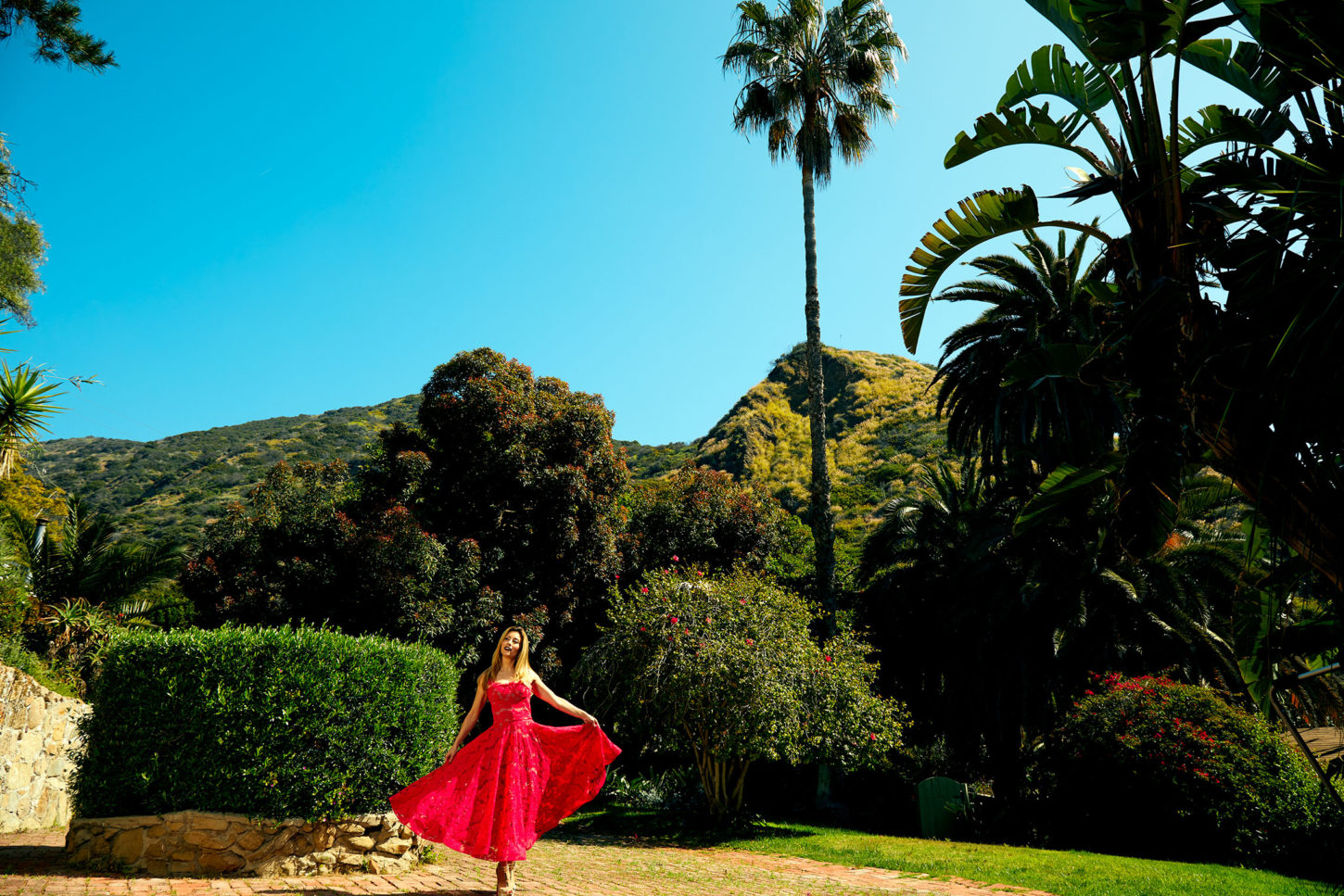 Which Italian actors do you consider “the best” right now?

It would be a long list but I must limit myself to a few representative names. First and foremost Carlo Verdone as an actor and director. He rendered the qualities and defects of the Italians with simplicity, he opened new paths, he took risks, he tried new lines, new languages, his humor never wearies, without resorting to useless vulgarity it lets be entertained and and makes you think. I am particularly proud to have worked with a prominent star like Lina Wertmuller, who, on the walk of Fame in Hollywood  will receive her personal star and career Oscar! I would mention Pierfrancesco Favino as an actor who made us be even more appreciated abroad, thanks to his extraordinary talent and with his almost perfect American accent that shows us that every obstacle can be overcome, and including Alessandro Borghi with whom I have had the honor of working in a small film called “5”. Since then, he has made enormous strides with the sublime interpretation of Stefano Cucchi in the film “On my skin”. Thanks to which he also began an international career.

Have you ever dreamed about living in California and taking part of American Dream?

Los Angeles and California in general were like a dream destination for me. I was lucky enough to meet an actor who was a true angel in the City of Angels, John Phillip Law, known as Diabolik and known in Italy for having worked with Alberto Sordi and Monica Vitti in “Polvere di Stelle” but also in “Love machine”,“Michele Strogoff ”,“Russian are coming ”and with Jane Fonda in “Barbarella ”. John was such a versatile and talented actor with a disarming sweetness and humility. He almost didn’t belong to this world. He surprised me with his simplicity, his search for affection and protection that he found in me and considering me his Italian daughter. He happily still does everyday things that did not let him lose touch with reality. Often in Hollywood the celebrity machine moves so fast that everything is chopped up and you search for that healthy life sensor, which is freedom. He was often a guest at my parents; and when I went to Los Angeles he would host me extravagantly, leaving me a room with the maid available. I started going to Los Angeles in the summer, foregoing holidays, I closed myself in theaters doing acting schools, acting masterclasses, with the best Hollywood casting directors, who, besides giving sound advice, acted as talent scouts for movies or tv series. Slowly I gained courage in obtaining my credits in Italy or Europe to acquire work permits as an actress in America. It was like climbing the highest mountain in the world. It is very difficult for a foreign artist to enter the American market but not impossible, I shot a Music video and a TV series that I hope will also be seen in the fall in Italy.

Is it difficult to act in a foreign language? Where will we see you next?

Soon, a film noir will be released that deals with the theme of human rights: “The Incredible Story of the Lady of the Third Floor”, where I play alongside a talented theater actress, Isabel Russinova. It’s a very daring and negative role. It is very unlike me, but for this reason I love acting, I can always push my limits, not accepting easy challenges and being able to express my dark side, even becoming therapeutic. I will return to America to shoot another interesting project that is halfway between “Mission Impossible” and “Da Vinci Code”. It is very difficult to act in another language because initially you are more worried about the accent than the intentions, but with a few more tests and the tongue-twisters everything falls into place. A quick secret? I use a pencil between my lips, repeating lines repeatedly and then I melt in the foreground and the words come out by themselves. I really want to work well in Italy and be beofe the audience personally. I was also proposed a theatrical comedy as a protagonist that would finally allow me to express myself full circle with singing anddancing in my ironic and sparkling vein. Follow me and surprises will not fail. 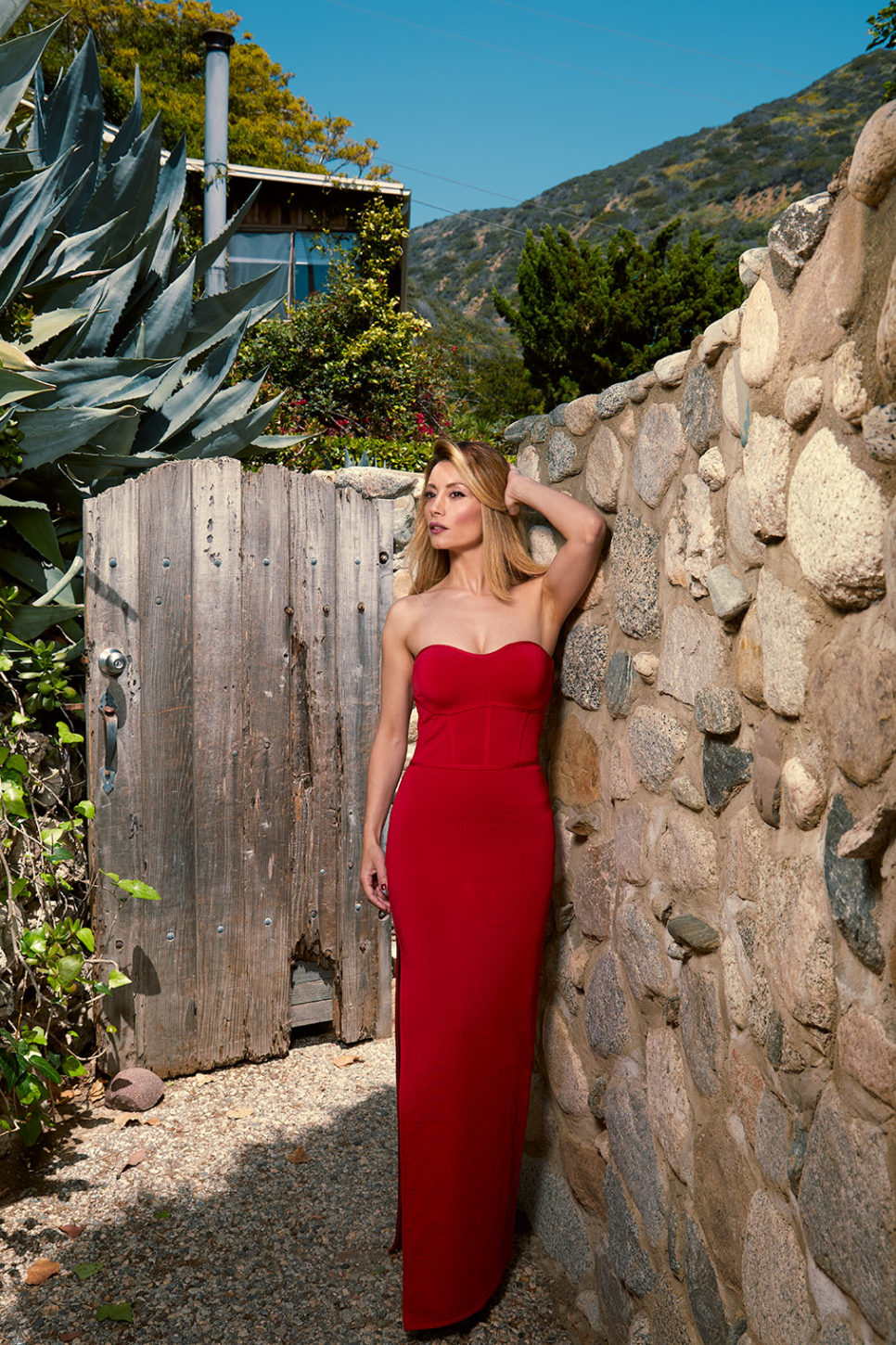 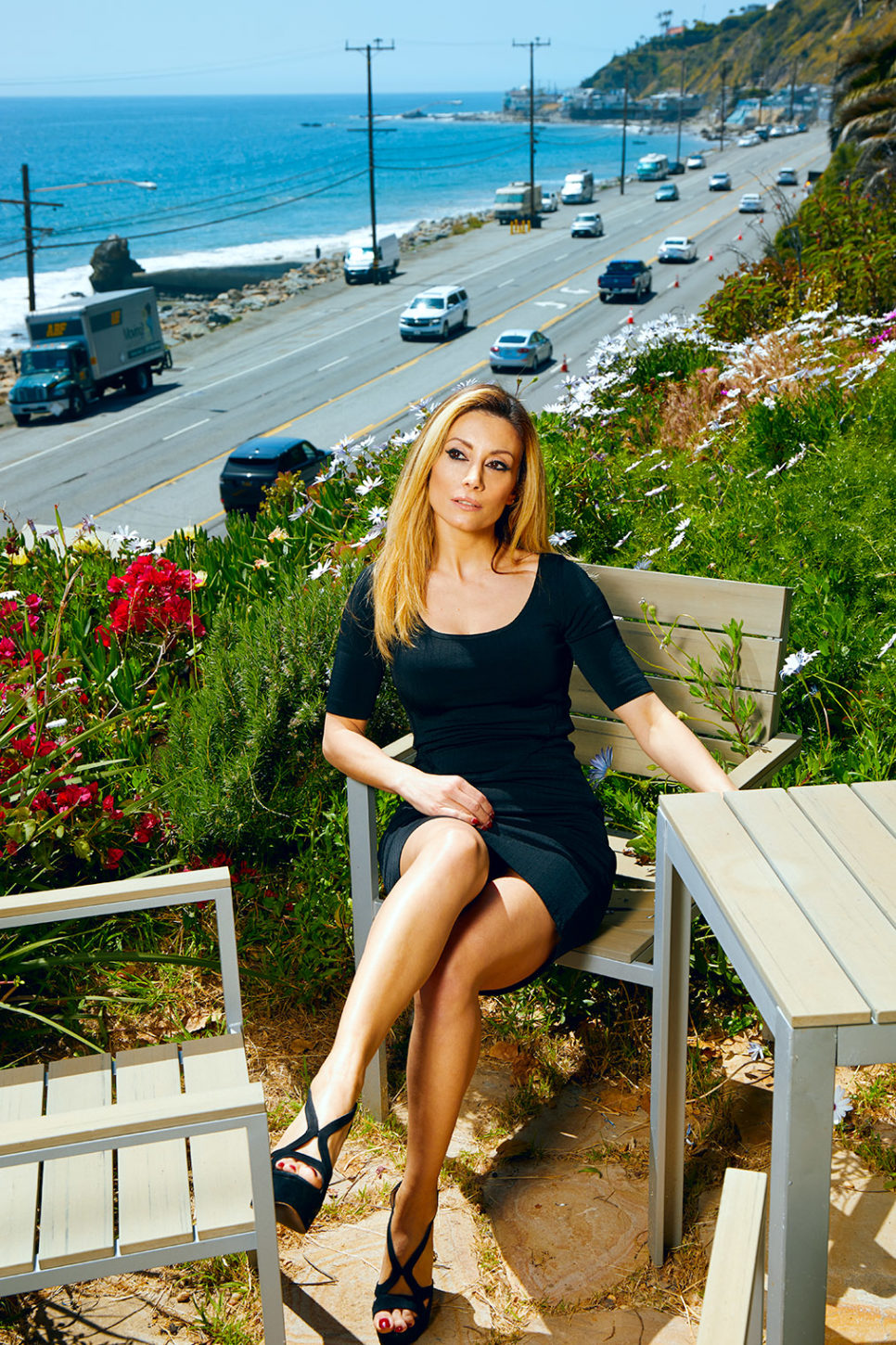 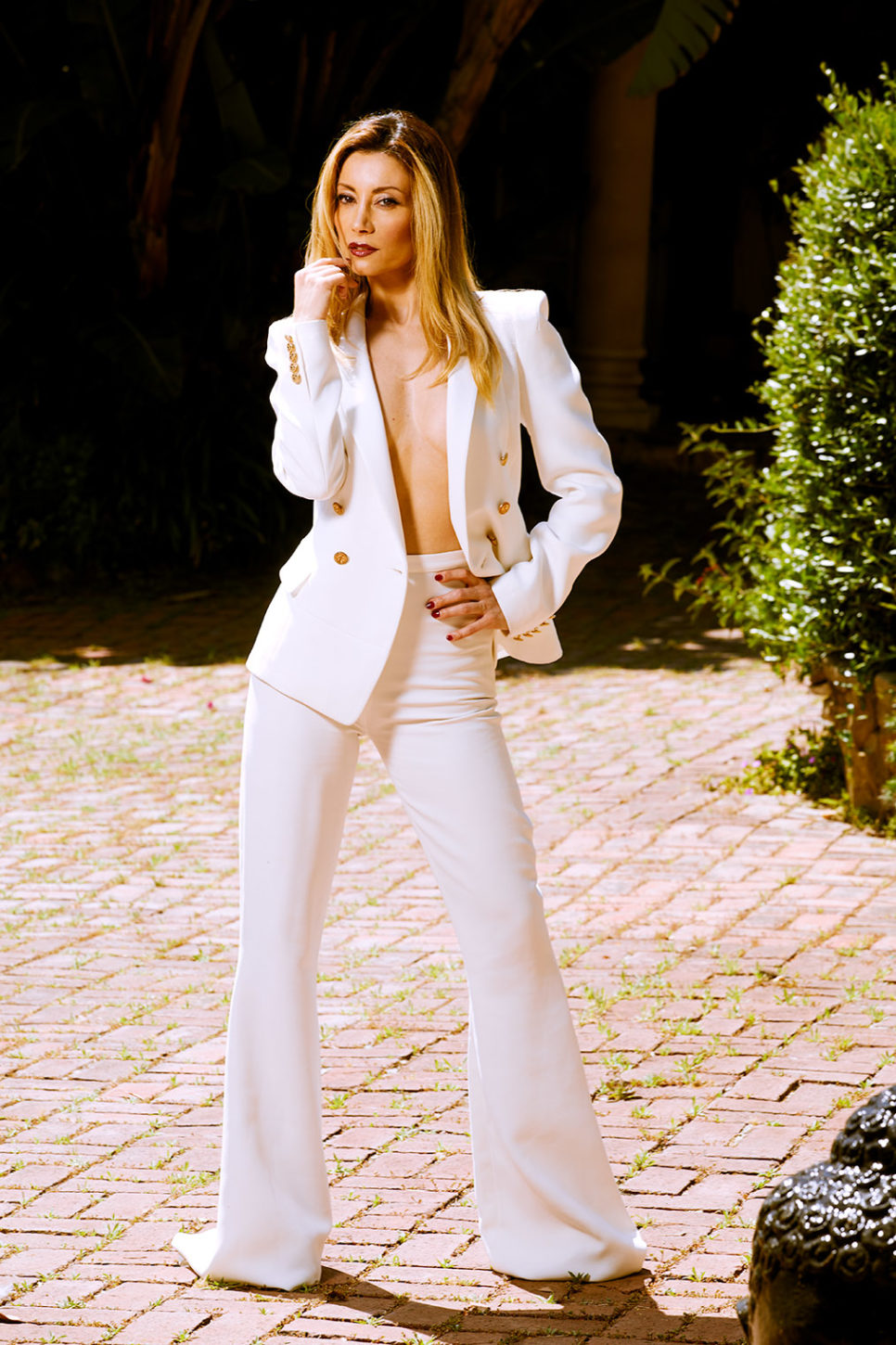 Which role would you dreaming of and which do you consider the most interesting?

The most beautiful role is always the next one, but if I had to choose, without a doubt, I would say the noblewoman, a role of my very first film ever directed by Aurelio Grimaldi. I was so young but I put all my passion and ingenuity into it, transforming into an artistic maturity to give to the character the appropriate worth. I always recall it with tenderness despite it having been a very strong role to play. A nice role that I would like to play is the new Lucien Ball, in “I Love Lucy”, who made from her imperfection a strength. We all need lightness so for me it’s enough to be a femme fatale or to do high drama. Let me return to play and entertain as I do then in everyday life.

Will we also see you in a new musical? What do musicals have that is so magical?

I love musicals. I was enchanted by them as a child. It is the most complete form of entertainment. I promise I will return to tread the floors of the stage because that is a thermometer for each artist to realize the value and affection by the public and to prove themselves to learn how much you can give and can exceed your limits.

Don’t the nude scenes embarrass you? How do you deal with them?

The secret is never to take oneself seriously. When I was very young I was embarrassed to have more explicit pictures taken. Growing up you form yourself, you understand what you want and what you don’t want, you know yourself better, you know how to value your figure much more, you acquire an awareness that makes you strong and invulnerable to anything. You want freedom, sensuality and express it without shame and without hesitation. For me, then, it is a way of making the directors understand that you have no problems with love scenes, with nudity but you are confident with your body because often you are more elegant naked than dressed.

You also participated in a horror movie by John Real. How did you find yourself in this genre?

I was perhaps the only child who was not afraid of horror, I loved the films by the maestro Dario Argento, of Lamberto Bava with whom I also worked in “Il Torturatore” and so on. The meeting with John Real, with whom I shot three films, made it clear to the public and also to me, that I am the perfect victim, given how many times I was dead, destroyed or lost. It is said that dying on set lengthens life so you still have to endure it for a long time.