What’s the point of having dreams if not to live them?

John Campbell-Mac is a B.A.F.T.A nominated British producer and actor based in Hollywood. He undertook extensive acting training at The City Literature Institute, The Impulse theatre Company and The Actors Centre London and for the past 12 years he has performed in many movies and TV shows. JC started in several cool British feature films and won numerous awards as an actor and producer, including the BAFTA nominated Winner Takes All which he also wrote. John attended the Cannes film festival in 2009 to help promote three films including the multi award winning ’45’, Left Holding Baby and the political thriller 31 North 62 East which feature stars actors John Rhys-Davies and Mariner Sirtis. John relocated to Hollywood in 2010, as this was the optimum time to take his career to the next level. He is very proud of the recent TV series LA Paranormal where he performes as John London. The film and subsequent TV series were shot with no scripted dialogue in the style of This is Spinal Tap and relied heavily on the skills of the lead actors.

He also wrote and produced the hit-man comedy Hit The Big Time which was filmed in Hollywood, Las Vegas, London and Utah. Since moving to Holywood, John’s prominence is undeniably discernible as he remains steadfast in is work. He is now working with respected Hollywood director James Van Alden playing the lead role of Charles Burns in Star Power. John has joined the ranks of the outstanding American pre-revolution drama Courage New Hampshire‘ with season 1 airing on cable networks INSP and PBS. He is also the proud winner of the best supporting actor for his work in the Toscar parody movie British Hustle for which he also wrote and recorded the films soundtrack. John is involved in the development of several feature films and TV productions including Lunchbox, Girl Samuri and Artifact Red.

During our encounter online last September, i found John to be very gentle, determined, charming, optimistic and energetic. He has a great (British?) sense of humor. “What’s the point of having dreams if not to live them?”. That is the actor’s life motto that brought him from far away to live his dreams. He knows no linguistic or cultural obstacles. John currently lives in Los Angeles, Carlifornia with his wife and he put it to me that he is working on a what he called a “misterious project” called Re-Acclimation. He is also preparing to shoot a new film in the coming months called A million Dead Presidents. His next dream? In our chat he hinted to me he would like to work with Martin Scorsese and Anthony Hopkins. The following are excerpts from our converstion:

From your British point of view: How exactly is Hollywood? How do you find your life there?

Living in Los Angeles is a dream come true, really each day is a blessing, and I’m grateful for it. Being British here is a double-edged sword. On the one hand it sets you apart from the pack as they seem to like us over here, people genuinely comment on my accent every day and ask “Are you Australian” (laugh) true story. On the other hand there are fewer parts because writers write about what they know about so the majority of roles are being written by Americans for American roles. So any actors considering making the leap, working on a flawless American accent is the best advice I could give to anyone. That being said I have more opportunities here in any given week than in six months of being in England. Originally I had no plans to come here. I enjoyed living and working in London but with so few films being made there it was hard to stay employed and I was feeling frustrated. Always wanting to take everything I do as far as possible I had considered Hollywood and America as it is the movie capital of the world. I was working on a film in Germany called Requiem for Tomorrow with a decent actor named Steve Pound, I remember him saying to me ‘what are you doing here? You need to be in America, fella like you might be able to make something of yourself.’ That gave me the final push I needed. So I contacted a visa lawyer and set the immigration motion in progress. Hollywood like anywhere isn’t perfect and has it’s ups and downs but the quality of life here is outstanding and now I really couldn’t imagine living anywhere else.

You are actor and producer. What do you like to be more?

I’m an actor first and foremost and it’s the reason I get out of bed in the morning. I enjoy nothing more than being on set or even in a class and performing a scene. I’ve worked in performance on one level or another for the past 20 years, in dance, music and even fashion which is all performance. But acting is not performing, it’s actually sharing yourself, bearing your soul ha ha with an audience or a camera warts and all, it’s about the most honest thing you can do because if you lie, the camera will catch you and the viewer will know. Production is a completely different skill set, crunching numbers and organization. I’m good with people and believe I have a natural talent for it. I’ve produced films, music videos and commercials, some people really enjoy it but I found it to be the anti Christ of creativity. On the one hand I’d be working out how to make a stunt or set piece look really cinematic then on the other wondering how we were going to afford it and if everybody had been fed that day.

What do you base on selecting movies in both roles, as producer and actor?

As a producer I have a number of projects that I have been developing over a few years which I’m passionate to get made. I remortgaged my house twice to make my first film so am no stranger to going all in. But now after working on a number of independent projects, I now only get involved in projects that have a realistic budget and finance in place so there is no need to beg, borrow or steal or make artistic compromises. As an actor I seem to get cast in 2 main genres, comedy and action / drama. Comedy is great, who doesn’t want to laugh all day and call it work? I remember being the class clown even at school so it comes naturally to me. I was a boxer and a martial artist for a long time so this has served me well and got me lots of action stuff but more recently I have been getting cast in more serious drama. A film or TV show is nothing without great writing, so this is what draws me to a project initially. If it has a great script and there is something I like about a certain character, I’m in.

You won many movie awards. Which one is the most important for you and what in your opinion is your biggest succes?

I’ve lived a blessed life on many levels, it’s not always been easy but it’s been a hell of a ride. Yes I’ve been fortunate to win a few awards. I guess these bring validation but this is not the driving force. I just want to do great work with good people and have some fun along the way, doesn’t seem too much to ask. My greatest success? That’s easy, marrying my wife Stephanie, she is my biggest supporter and my greatest critic and by far the best thing that has ever happened to me.

Hollywood is full of very famous cinema stars. With whom had you opportunity to work or just to go out for a coffe?

Partners in crime on and off set hmm I have been lucky enough to work with a lot of good actors, some famous, some not. You can check my credits after this interview, so I’m not going to name drop I’m just going to say the names have been changed, to protect the innocent (laugh).

You have been working a lot for TV. What it was?

I‘ve worked on quite a few so a few highlights. I had a lot of fun working on Courage New Hampshire. It’s a pre American revolution period drama so who wouldn’t enjoy playing dress up and fighting those damn red coats. I played a hapless hitman in Hit The Big Time. Really fun project that shot in London, L.A, Las Vegas and Utah so it was hard not to enjoy that. The grey of London, the sunshine of California then minus 20 degrees and snow around the Sundance film festival. I did this great pilot called Broke as a Joke, I played a bearded hippy in this eclectic household, that was too much fun, unfortunately it never got picked up. I’m currently working on a show called 3riple B, it stars 3 very attractive young ladies and is directed by the acting legend Sal Landi. It’s all action and I have been helping out with the fight choreography and get my butt kicked real good.

The last project you are realizing right now is “Re-Acclimation”. Can you tell more about this film?

I’m now allowed to say to much right now, all I can tell you is it’s a futuristic post apocalypse world in which I play a gun for hire with a conscience weird mix for a bounty hunter, that’s actually a line straight out of the script, I’ve probably said too much already. Hmm Mad Max meets the Matrix with a good helping of poetic justice. I’m just preparing to shoot a film next month called A Million Dead Presidents. I play a dark lawyer in a tough situation, no one gets out alive or do they? 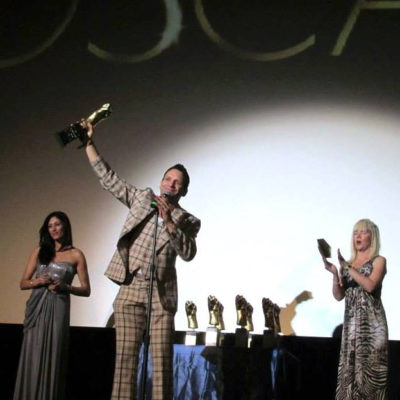 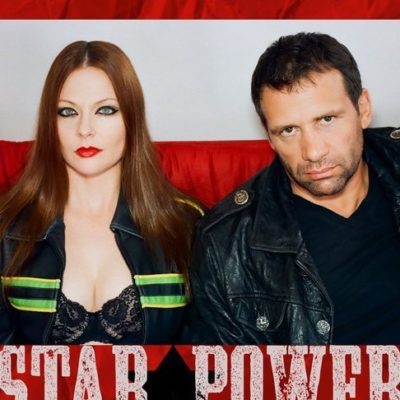 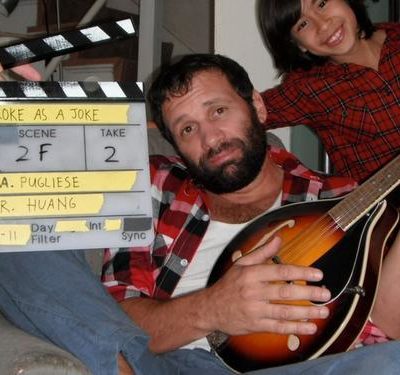 Your motto is “What’s the point of having dreams if not to live them?”. It was a reason why you left Europe and move to the USA?

Absolutely, I think we should all strive to achieve our dreams and laugh a lot along the way. I strive to be the best I can possibly be at everything I set my mind to. The worlds film industry is here in this one town so where else could I possibly live (laugh).

How could you describe yourself in 5 words?

Unique, determined, creative, focused and passionate with a good helping of cheeky for good measure (laugh) or how about sleepy, grumpy, dopey, happy and sneezy, wait a minute I’m sure I’ve heard those names somewhere else!

Many many things are on my bucket list and trying to live the dream every day. I wake up to the California sunshine with palm trees in my front garden every day next to a beautiful woman who loves me, as I said I am blessed and that’s really the dream. Professionally there are many roles I would still love to play and many people I would like to work with, Martin Scorsese and Anthony Hopkins are two people straight off the top of my head and roles well lets see. I would love to play a tough guy in a cop movie something like Mel Gibsons role in Lethal Weapon films. Or how about something like Jason Stathams role in The Transporter movies now that would be fun. How about this, being in a position to produced great films and employ all my friends and laugh my ass off everyday or do crazy cool stunts and fight sequences until the sun goes down, now this is something to aspire too. 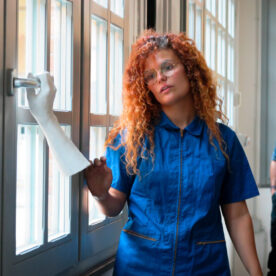 MArteLive Europe and European Union Initiative       —— Art In Progress is an... 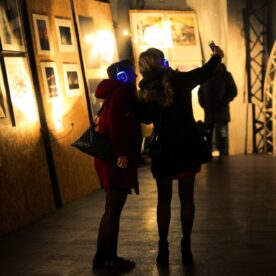 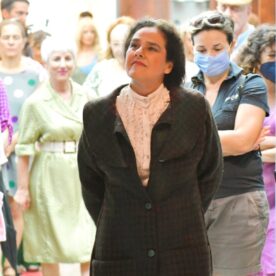 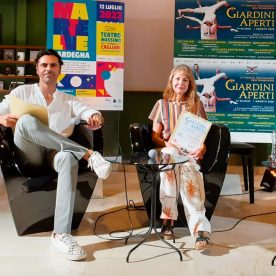 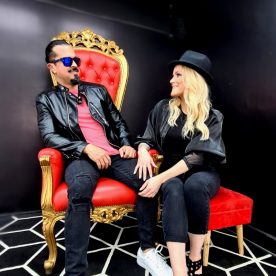 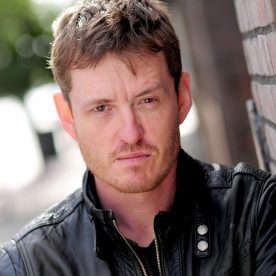