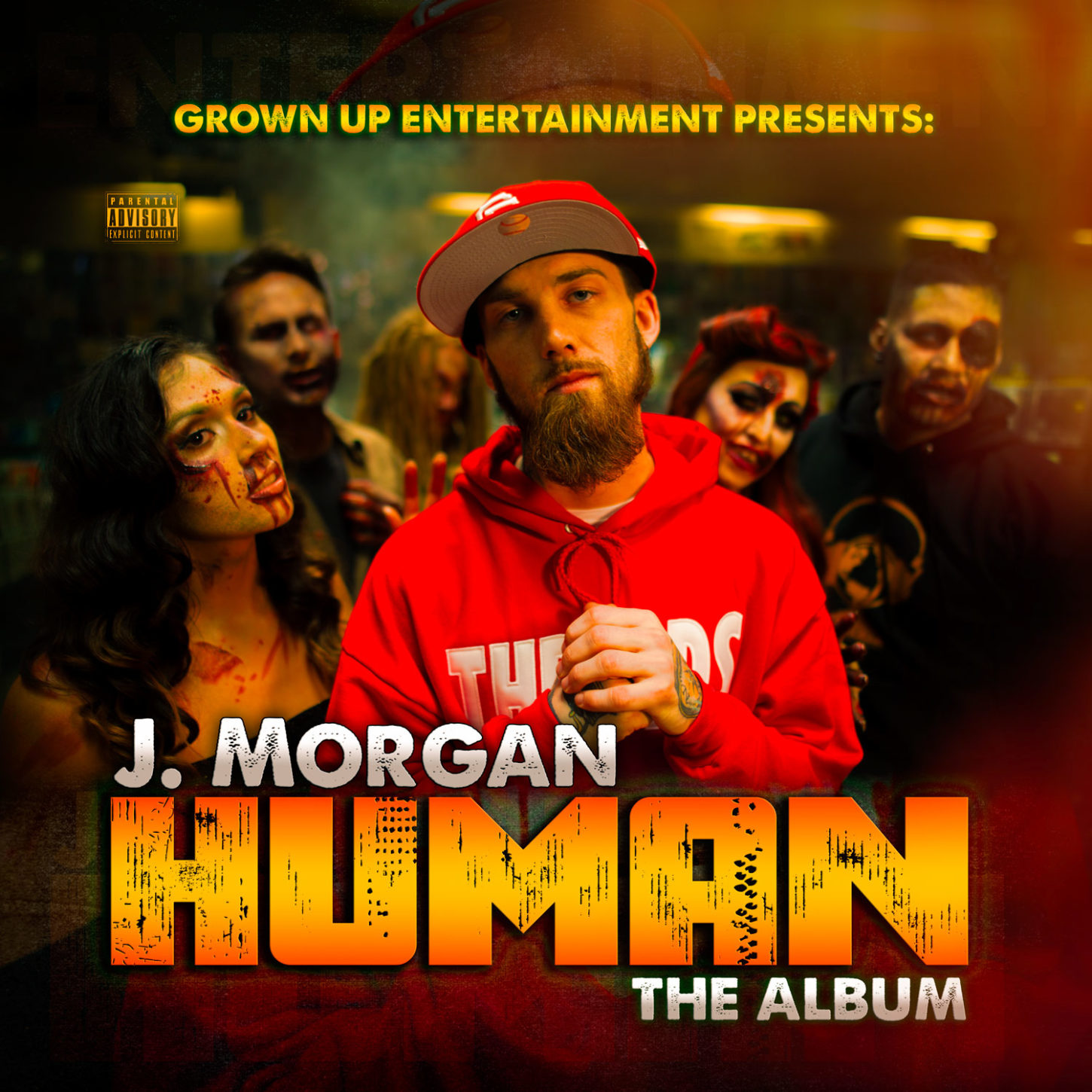 Jonathan Morgan, known in art as J. Morgan, is a young promising hip hop emcee from the San Francisco Bay Area. Jonathan grew up listening to rock (AC/DC) and rap music (Rakim, Eminem and Kendrick Lemar). His passion for hip hop grew with time. Today this is a music gender that totally expresses him and „makes him human“, as he said to me in a skype interview recorded on March 2016.

He stands apart from the majority of rap artists with his ability to connect with people’s true feelings through musical artistry. As he wrote on www.jmorganmusic.com his goal is to build up his fan base and call attention to his art and brand Grown Up Entertainment through social media, blogs, live performances and appearances.

J.Morgan has worked with artists like San Quinn, Berner, Pablo Fetti, The Great Whites, Shiesty, Allen Kass and many others. „Human“ is Morgan‘s first project since reinventing his style and ditching his former title J-Doe. The project includes a full length limited edition CD, special guest features by Babii Cris, Shiesty, and Simple Natural, three music videos, and behind the scenes footage. This summer he will release a free album consists 7 songs.

How long have you been doing this kind of music? What is hip hop for you?

I’ve been professionally recording music for 8 years. I have had an interest in all kinds of music since I can remember. As a child I was involved in a band, choir and drama. I have always enjoyed entertaining people. I fell in love with Hip Hop for its blatant way of telling things exactly the way they are. Age 10 is when I wrote my first rap song but I never had an opportunity to actually perform it for anybody other than my Mom and my Sister. I knew very little about Hip Hop culture but my music idols, at that time in my life, were 2pac, Dr.Dre and Eminem. 5 years later I discovered that I could freestyle rap. Age 15 I was moved to a new city, San Bruno, California, where I knew absolutely no one. I ended up making friends with some kids who knew more about hip hop than me and began showing me all aspects of it and not just what was played on TV. I realized that this type of music had so much history and technique to it and fell deeper in love. Hip Hop is a way for me to find truth in myself.

What is the music you grew up on? Who is the world’s King of Rap for you?

I grew up listening to mostly rock and roll. My all time favorite band is still AC/DC. Ages 10-15 is when I started venturing into Hip Hop music mostly because it was the most popular music amongst my classmates. It is really hard to say who the King of Hip Hop is so I will break it down to three artists from three different areas of Hip hop. They are are Rakim, Eminem and Kendrick Lamar.

Your city is present in your text. What is positive and negative about San Francisco?

I grew up in the San Francisco Bay Area. I’ve lived in San Mateo, Santa Rosa, Rohnert Park, San Bruno and Pacifica. All of these cities are with in 1 hour of San Francisco. I spent most of my time in San Bruno which is 10 minutes from San Francisco. The Bay Area is one of the most diverse regions in America. The city of San Francisco itself is known as a progressive city. I am proud to be from a place where so many different types of people live. There is always something new to learn about different cultures. And living in the Bay Area gives me the opportunity to learn these kinds of things every single day. A negative thing taking place in the Bay Area and in San Francisco especially is gentrification. Most San Francisco natives are being driven out of the city by tech companies and land lords looking to capitalize on the demand for housing in the area. Silicon Valley is only 30 minutes away from San Francisco, so a lot of these wealthier people are moving into the city with little or no regard for the City’s natives. Our politicians seem to be demonizing the homeless and passing laws that help the gentrification agenda.

What is the story of the song “Human”? What do you mean by “you make me human”?

Human is about the search for my purpose on this planet. A lot of us humans work at a job doing something that we aren’t necessarily passionate about. We all have things that make us feel alive and excited about life. The thing that makes me feel human after a long day of work is music.

How about the video? You were inspired more by Michael Jackson’s “Thriller “or the TV series “Walking dead”?

I wasn’t inspired by either, although I am a huge fan of “The Walking Dead”. The zombies represent main stream music and its fans in modern day Hip Hop/Rap. There is a lot of music out there that is used to brainwash the people or turn them into zombies. The zombies also represent the working people who are basically a slave to their job which they aren’t even passionate about.

Who are the artists you worked with and what songs did you arrange together?

I have worked with a lot of artists over the years. I have been blessed to create music with San Quinn, Babii Cris, Shiesty, Berner and Allen Kass. My music video “News Reel” features Babii Cris and can be watched on my website www.jmorganmusic.com.

What can we find on your CD: “Human”? How would you describe the style of this LP?

“Human” is full of feeling. It is a conscious and empowering piece of music.

What is your goal for the near future? What would you like to gain in the world of music?

I am releasing a free album this summer. The album will consist of 7 songs. I am releasing it for free because I really want my fans to have it and share it with as many people as possible. I will be releasing music videos to complement the album throughout the year 2016.