SURREALISTIC MYTHOLOGY OF A NEW (I-)HUMANITY

Alex Gross lives in Los Angeles, California. In 1990, he received a BFA with honors from Art Center College of Design in Pasadena. Since then, he has had ten solo exhibitions at various galleries, and participated in dozens of museum and gallery exhibitions across the globe. His most recent solo exhibition was in at the Corey Helford Gallery. In the summer of 2007, Alex’s first retrospective museum show was held at the Grand Central Art Center in Santa Ana, California. Alex is a recipient of the prestigious Artist’s Fellowship from the Japan Foundation, and several faculty grants from Art Center College of Design, where he taught from 1994 to 2005.

IIn 2006, Chronicle Books published Alex’s first monograph, The Art of Alex Gross.Since then, Alex has published four more books, all with Gingko Press. Alex’s latest publication is called Transformations, the cabinet card paintings of Alex Gross 2012-2019. It contains nearly 200 cabinet card paintings, which are antique photos that Alex transforms into pop culture characters. Each page features the photo before it was altered, and afterwards. Transformations also includes an introduction by renowned pop artist Ron English. It was released in October 2019.

Personally, Alex Gross is one of my favorite contemporary artists. I adore his irony and postmodern, Pop surrealistic mythology which he creates on his oil canvas. This artist speaks of the present, judges it with a smile and shows the human condition as it is right now: everybody with heads on the iPhones, or fashion victims surrounded by superheroes. The artist also confronts the themes of consumerism, industrialization and the omnipresent media, representing the psychological state of contemporary society unable to react, and which lives apathetically in a world overwhelmed by advertising. Looking at his works one should reflect and ask oneself: is this the right way to be? Do we know other ways to be? Presently he is promoting his new book “Transformations: The Cabinet Card Paintings of Alex Gross 2012-2019” by Ginko Press.

Your oil paintings on canvas include themes such as globalization, commerce, beauty, dark mayhem and the passage of time. Why does the contemporary consumeristic society interest you so much? What prompted you to tell this surrealistic but, in the end, such real stories about “I-humans”?

I used to paint more fantastical imagery, inspired by Victorian era advertising. But I found that I wanted to make social commentary and this did not allow me to do that. So my work evolved into talking more about our modern condition. I have strong feelings about things, and have always wanted to express them through my work. Once I started noticing people walking around staring at their phones, more than a decade ago, I couldn’t stop painting about it. Nothing seems stupider to me. And of course now, It’s a very rare person who does NOT walk around looking down at their phone. 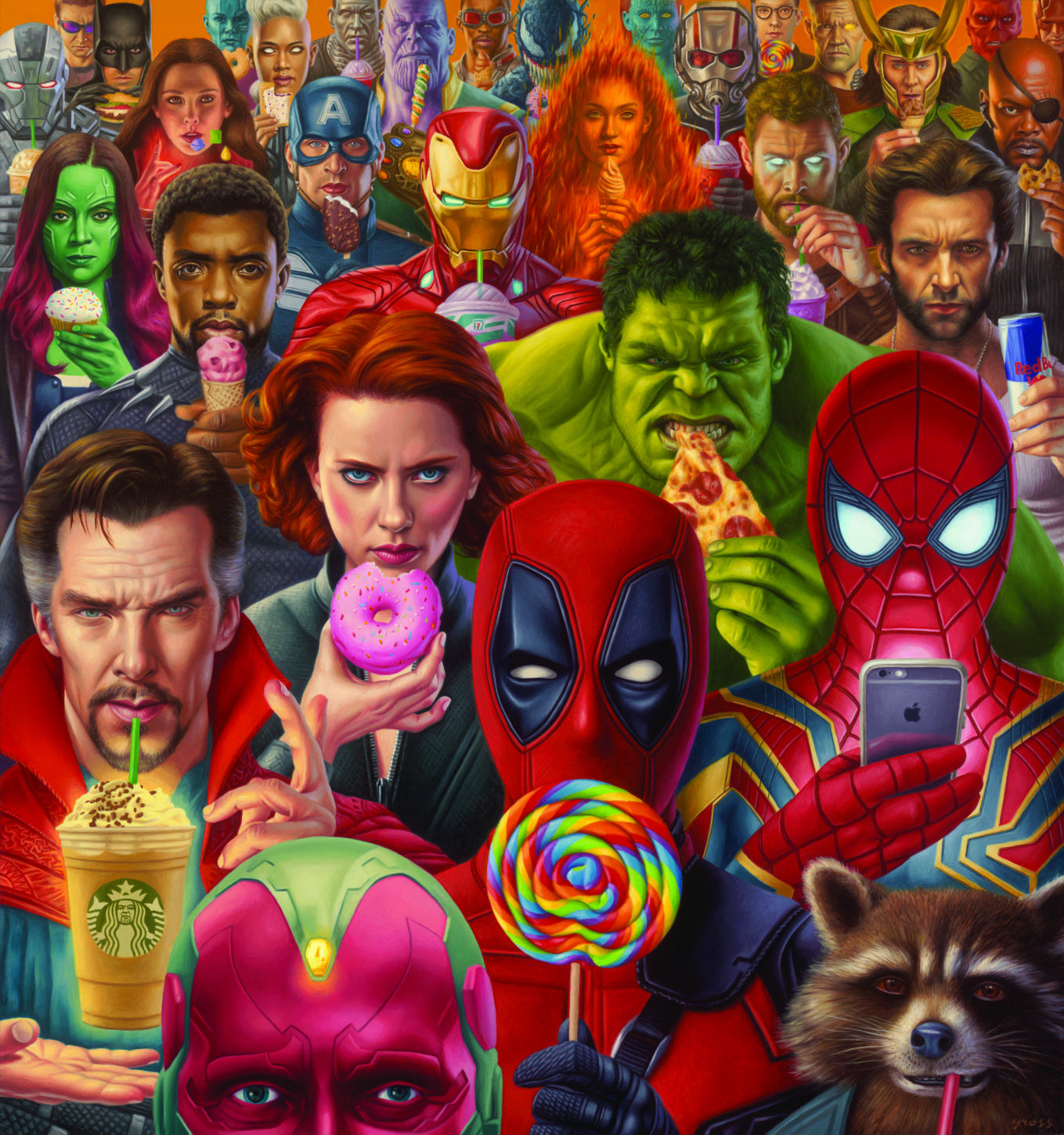 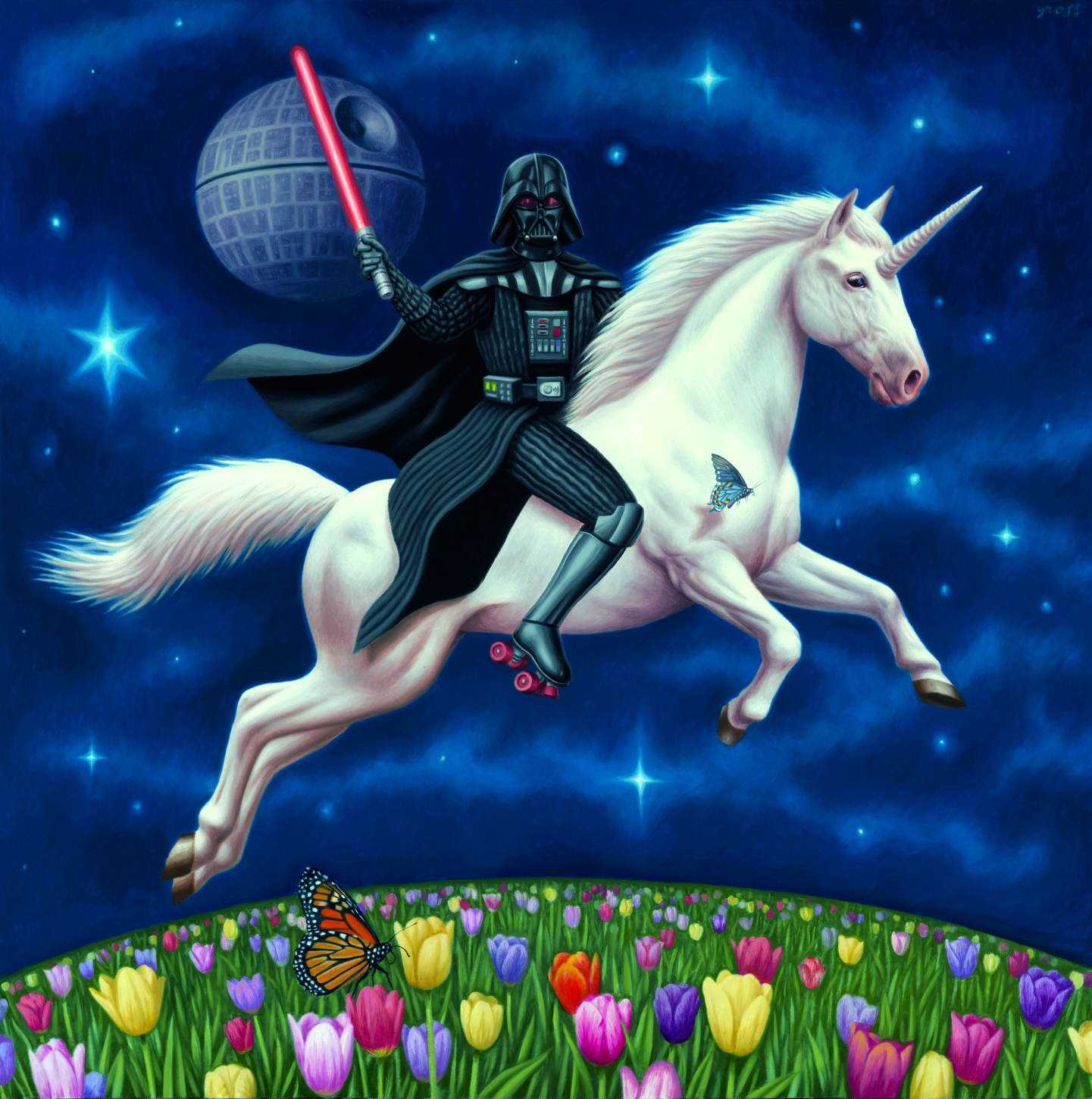 Is the fact you are American from California influence you particularly as a painter? For example, all the products of consumerism represented on your canvases, Coca-Cola, I-phones, fantasy films, and more, were made in the USA; this is the land of POP ART movement. Is it also a critics of your country or government?

Probably if I lived in some small town, I might have a different world view. But I do live in Los Angeles, where everyone is either in the entertainment business, or wants to be. But I’m old enough that I’ve also seen the gradual, cancer-like spread of advertising into more and more corners of our lives. This upsets me and I use my work to comment on it. I am a critic of many things— human nature, corporate greed, most governments and politicians, etc.

What do you think of the many Super Heroes that are around us thanks to cinema? Do we really need them in our lives? By any chance, are you a fan of the Fantasy books (if yes, which), especially of “Game of Thrones”, or you use the images from these stories on your paintings as simple symbols?

I am a fan of the Game of Thrones books and show. I also enjoy many of the super hero movies. It seems clear that right now, people are more interested than ever in these fantasy worlds. Escaping the nightmare of our present reality is more and more appealing to many of us. Perhaps this is because, in most countries, the government is led by oligarchs who serve the whims of their wealthy corporate donors. Our planet is dying, Democracy doesn’t really exist anymore, and many people feel powerless to do anything about it. So, the allure of fantasy is hard to resist. Many of these things are extremely well written, like Game of Thrones, and the amazing digital effects right now are seamlessly integrated into the show/ film. Seeing dragons that look as real as people, and being woven into a compelling narrative is pretty extraordinary.

In 2009 former president of The United States, Barrack Obama, won a Nobel Peace Prize for “extraordinary efforts to strengthen international diplomacy and cooperation between people”. In your paintings, you placed him close to the contemporary dictators such as Putin or Kim Jong-Un. Why are you so severe with Obama?

This painting was done around six years ago. It’s easy now that we have such a horrible president to forget what a disappointment Obama was. After all, this is the president who okayed spying on his own citizens and monitoring all of our cell phone data. Snowden revealed the depth of the NSA spying to the world. More innocent civilians were killed in the middle east under that administration, thanks to more drone strikes than were used by the Bush administration. Obama ran on a famous slogan— HOPE, for which Shepard Fairey made one of the best propaganda posters of all time. But he turned out to be just another politician constrained by the American system of Corporate Hegemony. And yet, compared to the pathetic, narcissistic idiot that now sits in that office, Obama seems like the best president ever. 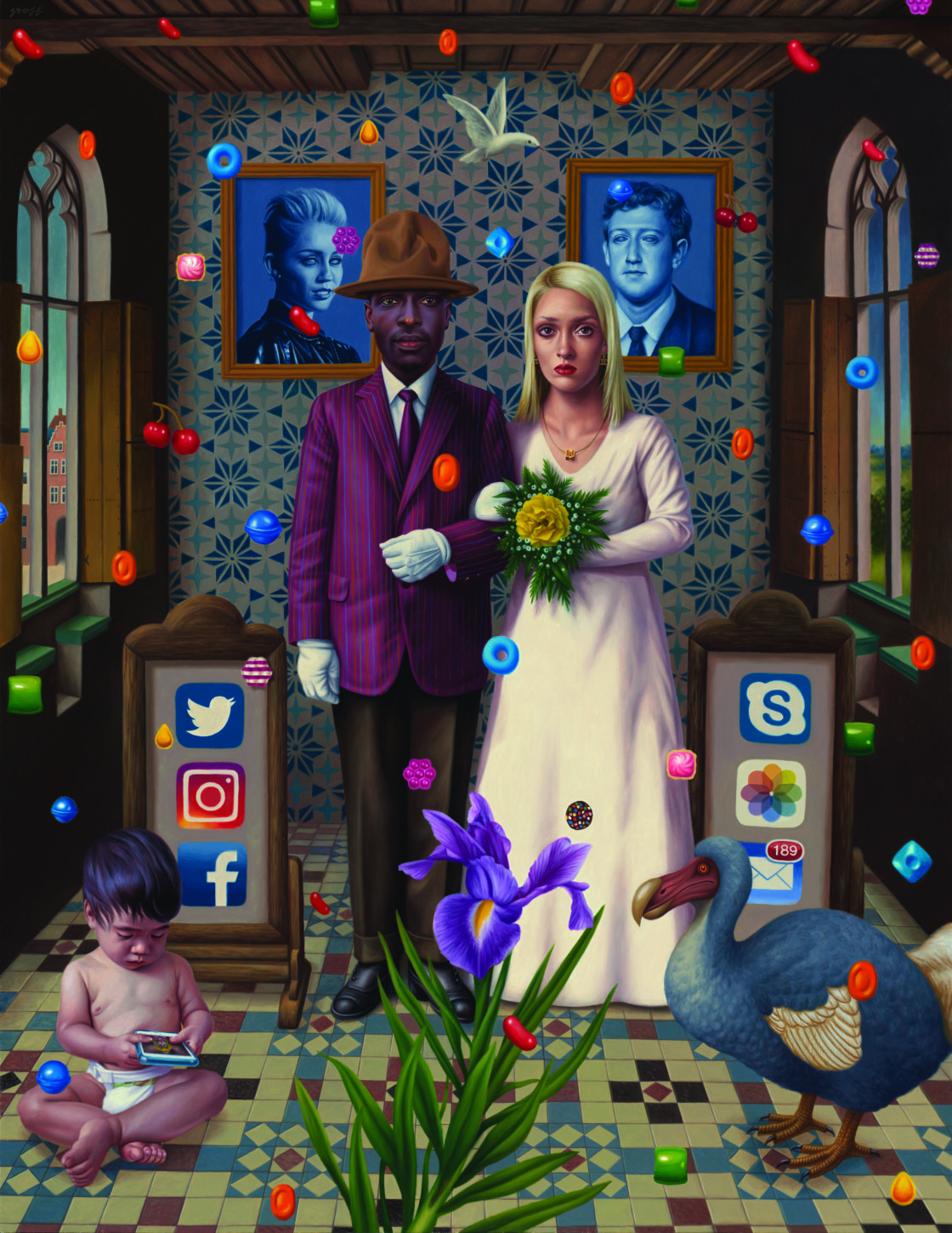 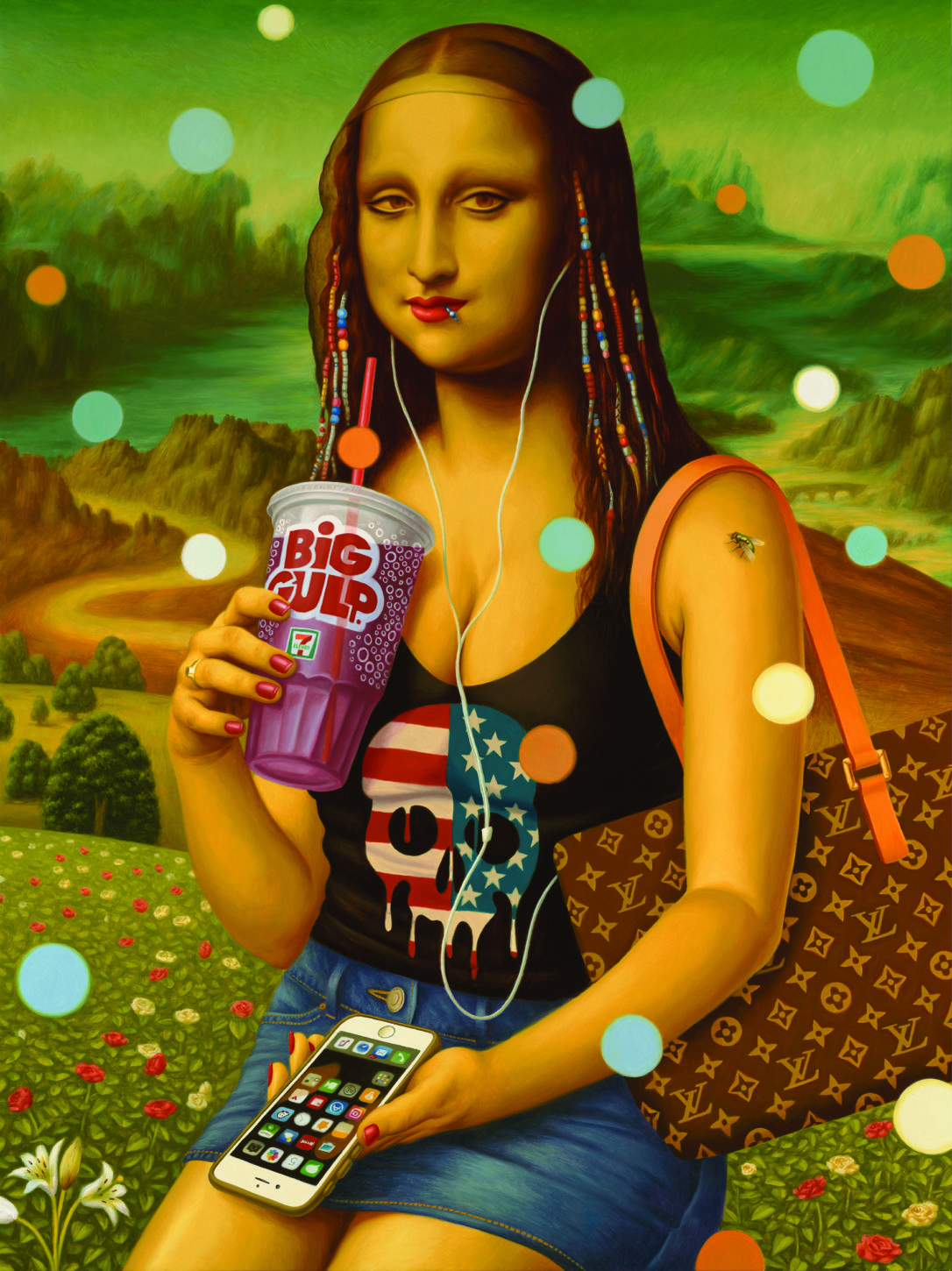 How would you describe a contemporary human? A fashion victim, a i-phone victim, a Coca- Cola victim or victim of themelves. As a man and artist do you feel a victim in part of this new world or is more that you distance yourself from it, just enjoy it and have fun with it?

We are all victims of marketing and advertising. It doesn’t really appear that way on the surface, but once you look into it, you realize just how many of our desires are influenced, if not fully created, by the presence of advertising and branding. Especially for those of us who live in large Metropolises. I try to be as aware as possible about the ways in which I am being manipulated, and I also have a bit of a natural aversion to whatever the “herd” is doing. But I’m not above the manipulation any more  than anyone else. I don’t use social media, other than to promote my work, and that helps. Nothing is more manipulative or designed to make a person feel terrible than social media. There’s a wonderful book called “The Attention Merchants” by Timothy Wu, that I recommend. It’s all about the evolution of the advertising business, and the myriad ways that it has survived and flourished at manipulating all of us.

Your work has been featured on the cover of the band Blonde Redhead’s album 23, as well as on the cover of the paperback version of After Dark, the national bestseller by Haruki Murakami, published by Vintage Books. Do you collaborate now with other artist, musicians, designers etc.?

Those projects happened because art directors reached out to me. These days, I mostly do my own artwork and make a living by selling original paintings and print editions. I like to paint interesting and beautiful people,  and sometimes I collaborate that way. I shot a well known actress last year, and am finally now working on a painting featuring her, as well as some others who have modeled for me.

What was yourfirst surreal painting? Do you remember the day you realized this is your destiny, painting and pop surrealism? Do you feel like a new POP Icon? I think you are one already.

Probably the first painting I did in this area is called “Will Make Good Friend With You.” I did it in 1999 after my first trip to Japan, which was very influential on me.

You has been living two months in Japan. It is how your album “Japanese Beauties” published by Taschen in 2004 was born. Did you find their culture very different from US or European countries? What surprised you? Which foreign exhibitions do you remember in a particular way? Will you come soon to Italy with your art?

Japan can be mind blowing for westerners when they first visit there. They have a unique way of taking western culture and mixing it up in a uniquely Japanese way to produce a hybrid that is neither truly western nor Asian. The people there are kind and hard working, and It’s a wonderful place to visit. It is a world apart from Europe and the USA in many ways. I don’t have any plans to exhibit in Europe right now. Lately, the model I am using does not involve exhibiting at all. I am self sufficient and mostly do work for commissions and print sales. Exhibiting in galleries comes with many headaches and is a ton of work. It’s not very high on my list of priorities these days.

Yes! I am releasing a new book of cabinet card paintings at the end of October. Cabinet cards are antique photographs and for many years now, I have been painting on them, transforming them into pop culture characters. The new book is called “Transformations, the Cabinet Card Paintings of Alex Gross 2012-2019.” It is published by Gingko Press, and contains 216 pages full of painted cards. Each page contains the before image, alongside the image after I painted it. I’m pretty excited about the book and it will be available at all your major bookstores and online sellers starting around October 30th, 2019.

The film of the moment is “Once Upon the Time in Hollywood”. Tarantino, called “DJ director”, like you is mixing various styles and putting them together in a single story. Have you already seen the film? This film travels back in time to 60s. If you could chose, in which historical epoch would you like to live?

I have been wanting to see it but I have not had the chance yet. I think the 60s-70s sound like a fun time to have been an adult. All my favorite music is from that era. But it’s hard to imagine life without the internet. I think I’ll stay here.