THE (AFRICAN) FUTURE OF THE ITALIAN CINEMA

Meeting Kassim Yassin Saleh (1976), an African actor and cinema director based in Rome, was exceptional. It is difficult to imagine how much good energy he evokes. He is like his clothes and crazy hair, or his short films: full of color, full of life, positivity and human goodness. He and his cinema attract people thanks to his creativity, kindness and the enormous talent. Carlo Bellincampi, the legendary Roman cinema stars portraitist, after the JL Interview exclusive photo shooting with the artist, said: “In my opinion Kassim is the future of the Italian cinema”. In recent Italy’s hostility against emigrants, Kassim, so in loved with his new country, is continuously creating an Italian art and fighting against divisions, racism and hatred.

What is Kassim’s Story? We talk about it in our twenty minute interview, but what we have not mentioned is that Kassim arrived in Rome in 1998 from Djibouti, the country in the Horn of Africa. After many small jobs in various sectors, quite by chance, he became a model for an advertisement – that lead him to acting classes. He soon discovered a natural talent for cinema. He starred for the first time in “Said”, the first Italian blaxploitation movie, Tarantino style, directed by Joseph Lefevre, and in “Nero Apparente”, the best short film at the Riff Awards.

In the last two years Yassin has been working more as director. He self-produced a short,”A Special Day”, presented at the Cannes Film Festival in the Short Corner section. Then he shot the pilot episode of “Sottomess@”, a black comedy for the web, presented at festivals such as: Roma Web Fest 2016, Calcata Film Festival and Terminillo Film Festival. In 2017 he made “21 Insonnia”, a short, which was presented at the Cannes Film Festival in May 2018, and “Idris”, the winner of the MigrArti call of the Ministry of Cultural Heritage. Kassim doesn’t stop with cinema. His next dream is to realize the TV sequel „Aswad”, written with Heidrun Schleef. The teaser has been completed and proposed to Netflix and Amazon. 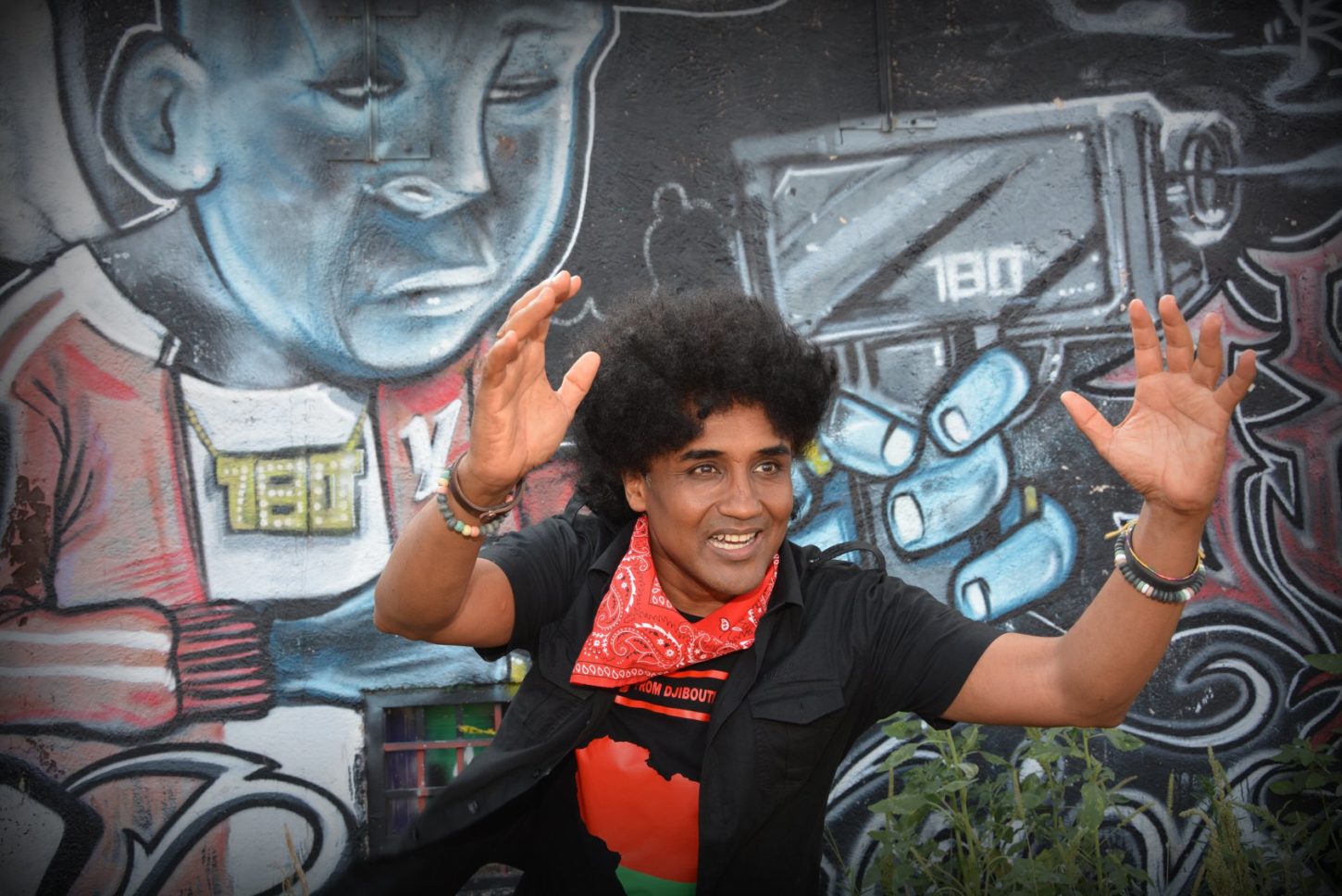 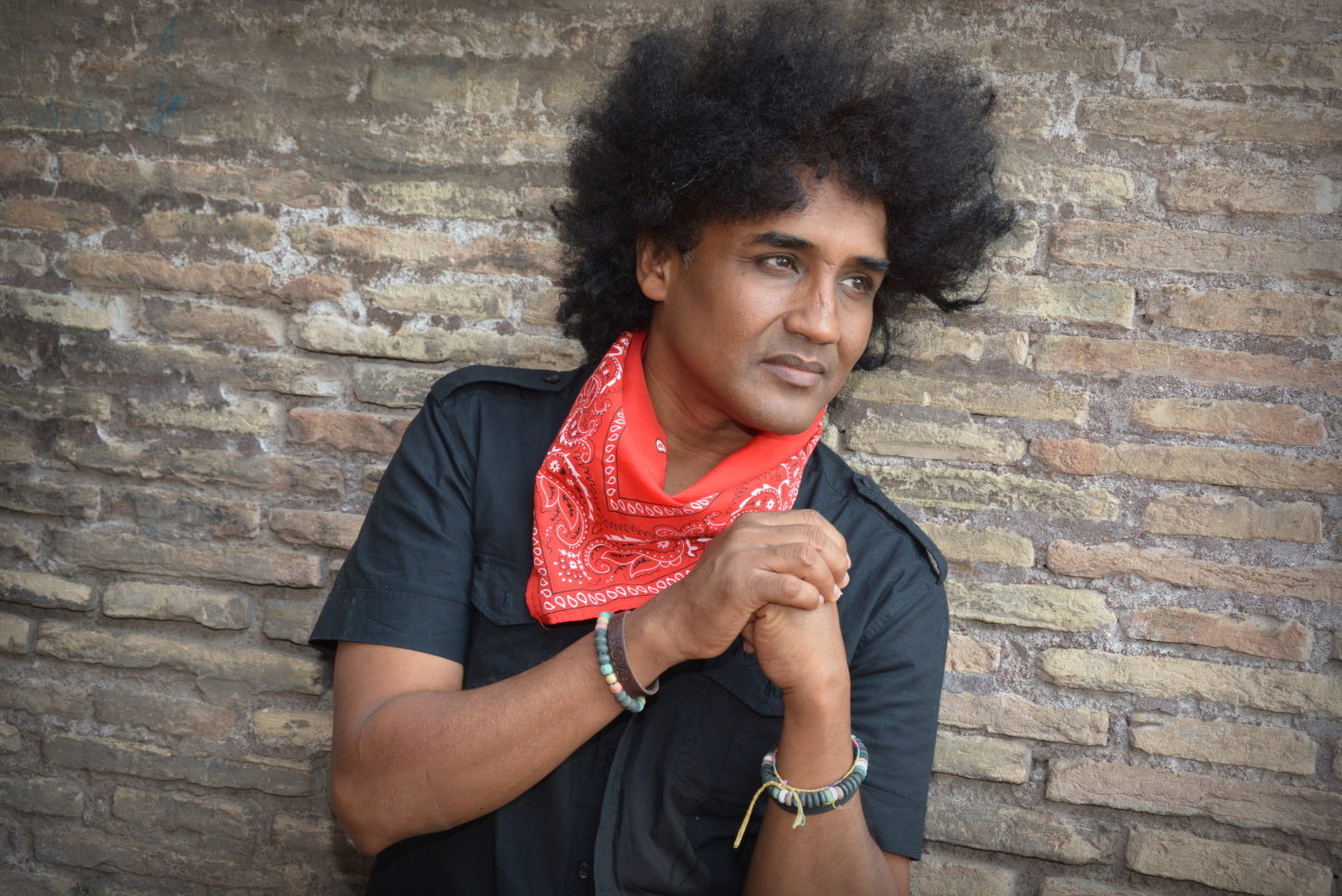 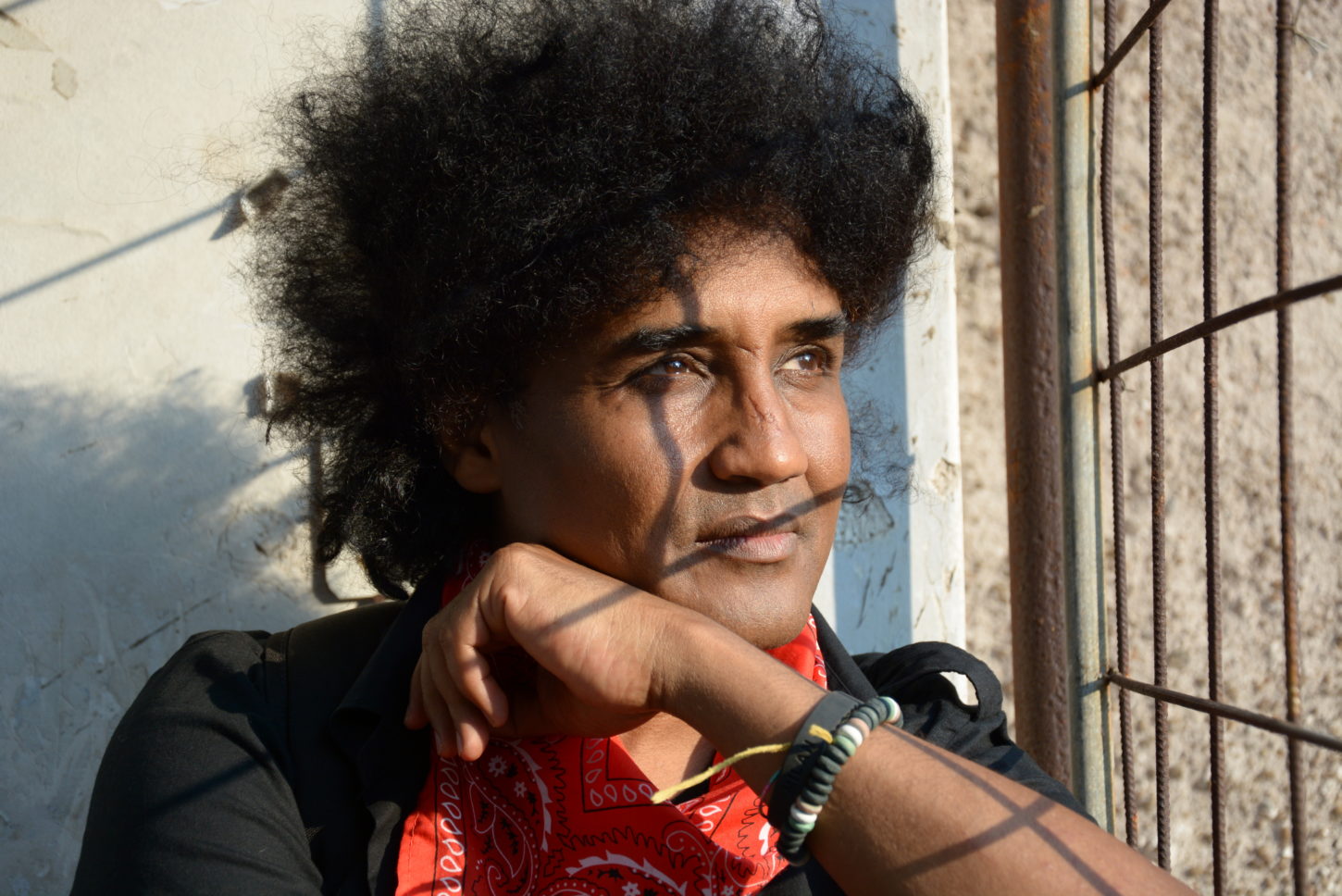 In various interviews you say that you fly to Africa as a cinema director to present Italy. What image of this country emerges from your films?

Rome is my home. I have been living here for almost 20 years. I did a short in February called “Insonnia 21” that fortunately, was presented in the Short Corner Festival in Cannes, where I met a Moroccan delegation that helped me go to Tangeri with it. Now, I, emigrant that lives in Rome, go to Tangeri with an Italian cinema product. I talk about Italy. I tell emigrant’s lives (on via Marsala, close to the Termini Central Station and other questions). I also want to show the culture of Neorealism Italian cinema and the art of an Italian, I love, Pier Paolo Pasolini or De Sica and others. There I brought “21 Insonnia”, a human film, a genre that touches me and gives off positive energy and humanity. With these kind of films I feel happy.

This is Italy that you talk about…

Yes, I love this country. In this film I show the difficulty of an Italian woman, Agnese, “head cutter”, I mean a woman that fired people, 40 years old, never married with no family that once met a man… that finished on via Marsala, the street where, in Rome, the homeless sleep. I also saw on that street my Somali compatriots. I have this place in my heart. Lots of people sleep there, Italians and foreigners. This reality I had the pleasure to talk about, that other colleagues don’t want to see. This is a “human cinema”. This cinema I brought with me to Morocco to an another international festival. That’s why I said that I am a funny emigrant that now is going to Africa to represent and tell about Italy.

What is your private story? Why did you decide to come and live in Italy?

Difficult to say. When I was living in Africa I didn’t think of going to Italy. I was younger and I loved, as all Africans do, soccer, so before coming here, I wanted to be a football player. Then, with my older brother I decided to go away, to leave the country. I mostly wanted to go to Canada (they speak French) or to the United States. My mother tongue, of course, is French. In the end, at 21, a young man, I came to Rome, Italy and decided to try and settle in this country, so similar to Africa: hot and beautiful. Of course, at first, I wanted to go to Paris and from there to Canada, but it was not possible, so I stayed in Rome. In the past, Italy was more open to foreigners, even if lots of my friends went to Canada. Here I said, this is my home, I obtained documents with much difficulty and now I am here, I am an artist.

Thank goodness it went like this… you have lived here for many years.

Yes, 20 years. But I am still waiting for my citizenship. I am sorry that a short, that I made this year, “Idris”, with all Italian participation, could not be represented as an Italian production because I don’t have an Italian passport.

We hope that will change soon… 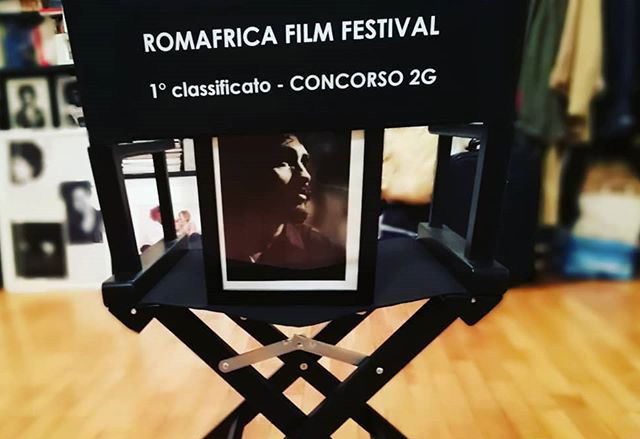 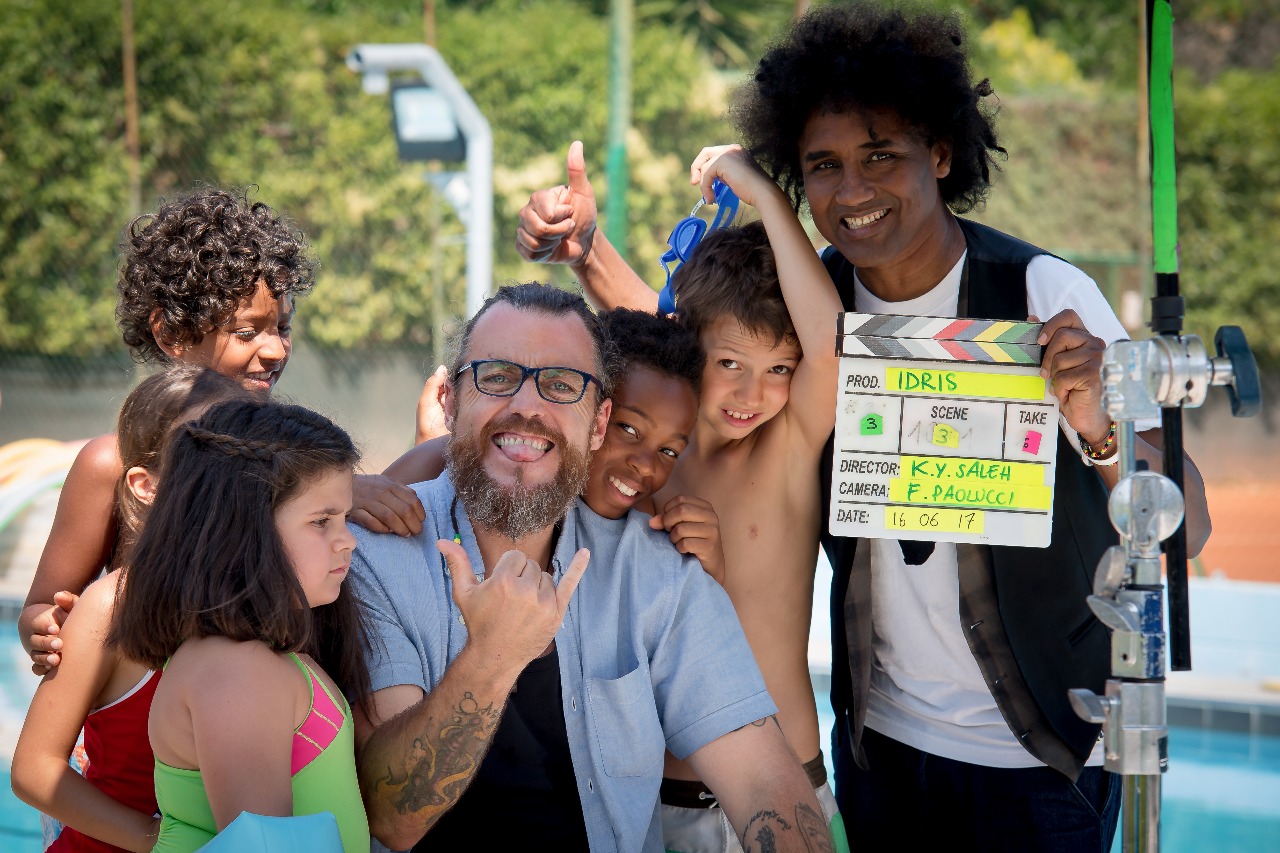 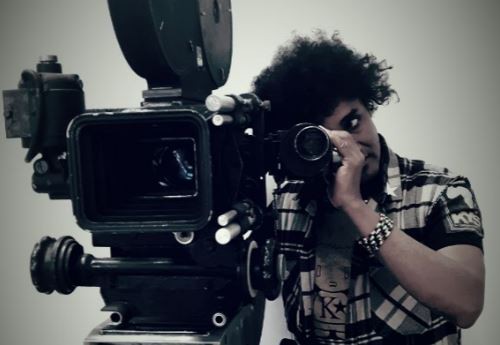 You are not a war emigrant, as we said, but this theme you touch in the short, “Idris”. What do you want to teach Europe?

With this 13 minutes production I show a story of Idris, a 10 year old Somalian child that arrived in Italy on the boat with many emigrants. Italy is the easiest place to reach by emigrants. He lost his parents, arrived in Rome and here he met other kids, Italian kids. I didn’t want to tell only an emigrant story but a story of Italian kids that play with this emigrant in the pool. One of these kids had lost his parents too. Children are more open-minded than we, adults, they are our future.

They have no prejudices, they do not judge and feel things directly.

Yes. Idris discovered that other kids have problems, one’s dad is in prison, another’s mom is on drugs etc. I wanted to tell a touching, human and positive story. This film was presented at the festival of Venezia, in the emigrant section.

In which way are you influenced by the European cinema? Why did you feel this need to be a director?

I didn’t study to be a director. Before I was an actor. I felt obliged to be a director. I noticed that the Italian directors or Italian authors don’t tell the emigrants’ lives. As emigrants I mean all foreigners. They don’t consider foreigners, they use them for one part and that’s all. I said to myself, I have to stop this mechanism. How? I was lucky to meet the best scriptwriter, a German woman, that lives in Italy. I worked with her since 2012. I went with her to Cannes and Venezia and now we prepared a TV series “Aswad”, a very powerful thriller action film. We made it at night. We have a producer. Italian cinema is changing, getting better. In the past, Italians were number 1, I mean with Neorealistic cinema.

Tell us more about it. You are so in love with that cinema of the past.

Yes, I love Neorealism. “Mamma Roma” by Pasolini or “Ladro di Biciclette” by De Sica, are masterpieces. Then came Fellini, Rossellini…They were so many in that era. Italy produced a lot of films, then I don’t know what happened. Everything changed. Now, we, emigrant foreigners, we can give them the best to carry on their cinema. It’s difficult but possible and we must try.

You won many awards. „Idris” was shown at Venezia Film Festival and “21 Insomnia” in Cannes, right?

I showed two shorts there. In 2016, „Special Day” in black and white and in 2018 “21 Insomnia”. The last one won also in Ardea. „Idris” won a Jury Award in Siena and in Rome at Africa Film Festival. Everything is going great now for me. It’s the right moment for a new Italian cinema. 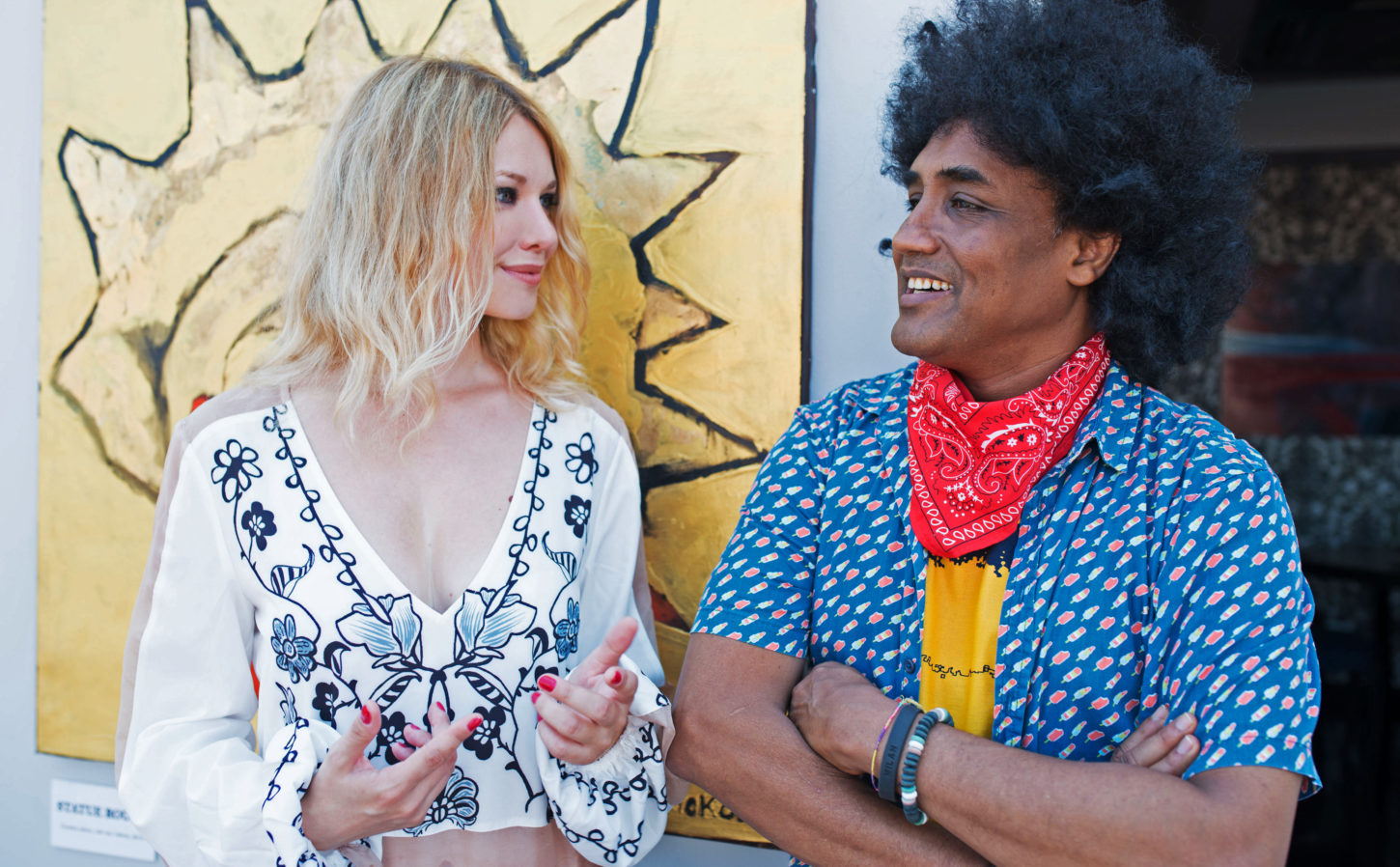 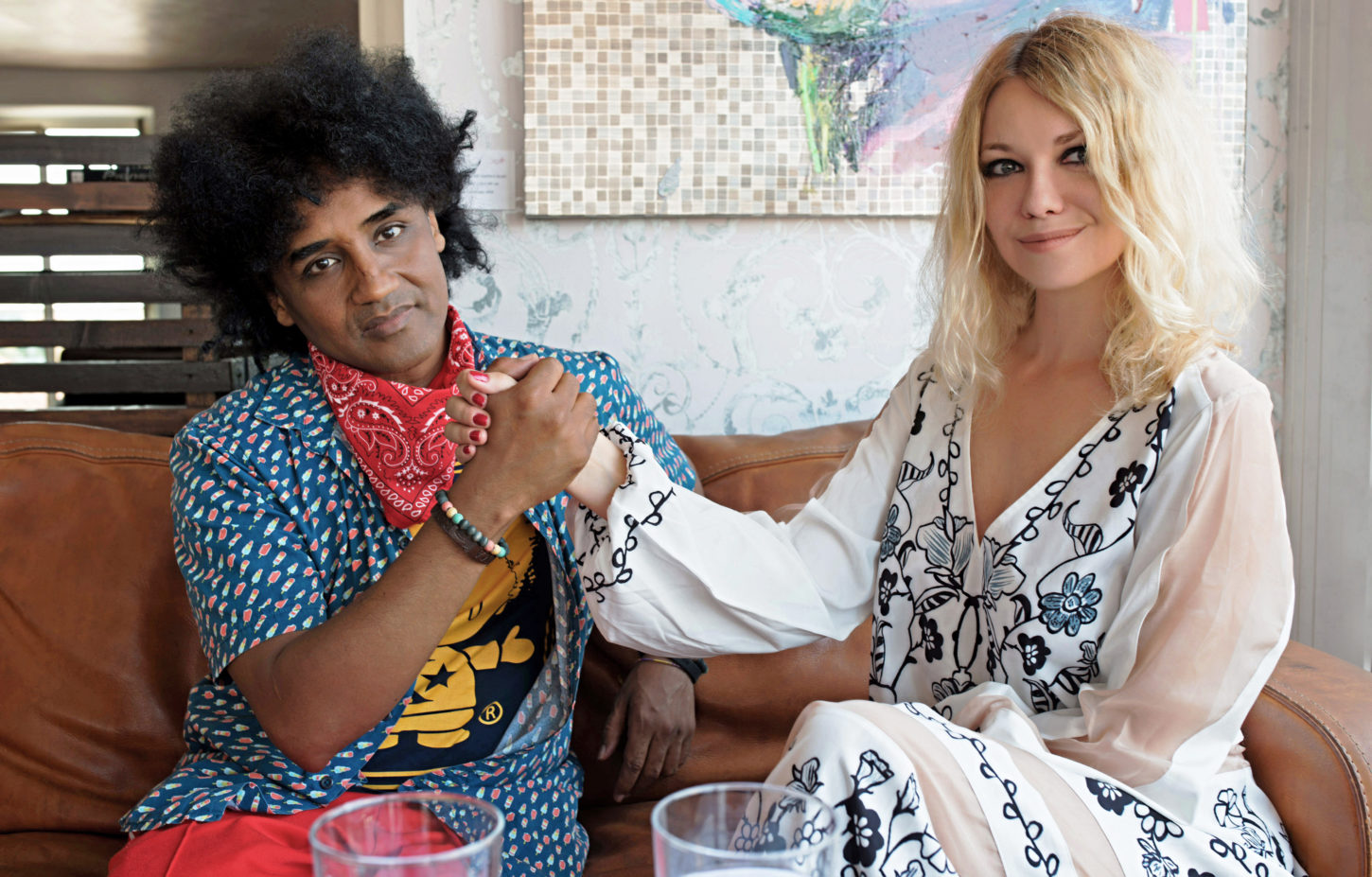 It is said that you are the future of Italian cinema. Ho do you feel at this moment of your career?

I am just at the beginning, but lots of people that see my work appreciate it. My cinema is new. I aim for quality. I don’t make amateurish films. Script must be very good, first, and convince me to make the film. I am a scorpion, zodiac sign, full of passion and ideas, so I am sure I will make this my project work. My works are Italian and I want “made in Italy” to be my life.

How would you describe your directing style? You also treat a lot social themes as dialog between cultures and religions. Will you continue in this direction or do you see yourself also in other genres such as comedy?

My masters were mentioned before, they are neorealism directors but also Matteo Garrone, a contemporary director, who made a masterpiece, “Dogman”. I saw it in cinema, this film profoundly moved me. I also like a young (33 year old), unknown Italian-American director, Jonas Carpignano and his film “Ciambra”. They are the biggest talents now. Oh, without forgetting Sorrentino. I like the photography in his cinema. He is a cinema paintor and writer.

Not without reason he won an Oscar Award for “The Great Beauty”.

You know, I appeared in this movie. In the dance scene, I was there. I was with Luca Bigazzi, a photography director, for 4 days. It was an amazing experience. I also liked “Io, Daniel Blake” by Ken Loach and the light in there and the new film by Spike Lee, “Blackkklansman”. I am like a mix of them all and of African and Italian culture. Speaking about religion, I am Muslim, but I put all religions in my films. I play with religions because it is a delicate moment in Europe that we are now living in.

Indeed, there shouldn’t be all these problems and conflicts between us…

No, there shouldn’t be, because we are all equal. We must understand that we have only one life. For money or other interests we destroy each other. Now I am preparing, as you asked, my first comedy.

Wonderful! What will it be called? Can you tell us?

I can’t tell you the name but it will be funny and make one reflect, as always. It will be directed by me and written by my German friend, Heidrun Schleef. It’s all thanks to her. She brought me to such high levels. She has a gift and God let me meet her. She discovered me when the all doors were closed to me. She worked on my last production, she was on set of “Idris”. She is very important, writes very well and corrects my mistakes such as in a crying scene during the making of “Idris”.