FLOWERS WILL COVER EVERYTHING

Human history is a wide Mandala.

Then, somehow, a cosmic wind will blow.

And then, flowers will cover everything_

Elio Graziano is an Italian artist, architect (born in Sicily) living and working in Berlin since 2011. During a period: April 28th -May 15th, 2016 he exhibited his last work „Flowers will cover everything“ at the Gallery L’espace De l’espéce in the Kunstfabrik HB55. His works are poetry and paintings between expressivity, abstraction and referentiality. According to Kerstin Godschalk, the exhibition curator, they attest to a genius artist‘s mind that exercises free association and movement. He plays colours and makes us comprehend how our brain functions, how memories are stored and how they link together for various new interrelations, forming a manifold of bonds. He leads us into action.

The details growing on and out of his canvases are not jeopardizing the flow of the energetic paint, but unfold and reproduce in uncontrollable directions in front of our inner eye. Floral still lives are searched in vain. “What we are able to, lies in the eyes“, this is how one of Elio Graziano‘s poetic texts begins. Next to his gestural abstract expressionists paintings they are what the exhibition and work cycle “Flowers will cover everything“ is composed of. Its central motif being an all-encompassing energy that blossoms without exception including those of evil. Crisis offer opportunities. Living and art means to “bring something new into being.”

Elio Graziano plays with material and colours of different quality and origin. “In time of social unrest the question of its elementarity becomes more and more urgent“. Expediency and judgment, principles of hierarchy are dissolved in reliance upon a rudimental knowledge without reference values. A mixed crop of elements almost automatically coheres and shares identity – Godschalk‘s description continuous. Everything enters in tangential relation, the slightest touch points mark the difference. His paintings live off wandering through infinite width; its tension drawn from simultaneity.

I had the honour to meet Elio Graziano a month after the Berliner exhibition in Rome on June 10, 2016. During our short meeting the artist summarized his work in this way: „I started to work on this project eight months ago. My grandchildren influenced me and helped me realized that the human heart is the last organ to leave us. Until the heart beats, you work, act, do. I observed them and I used the music to let me go. This spontaneous doing is our memory and consciousness and we never should abandon the child in us. In my works there is also a little bit of Dadaism that I understood thanks to William Seward Burroughs and his theory of Cut-up.

Asked about the flowers motif in his works, the artist said: „During the creative process I realized my flowers are connected to Les Fleurs Du Mal [“Flowers of Bad“] by Charles Baudelaire. How? That was the first book of poetry that I’ve bought. Painting these15 works recalled also another important book, „Visions of Gerard“ by Jack Kerouac, and, in conseguence, I dreamed one night the phrase: „Human history is a wide Mandala. Then, somehow, a cosmic wind will blow. And then, flowers will cover everything“. This is how Mandala, a spiritual and ritual symbol in Indian religions representing the universe became a symbol of my exhibition.

PHOTOS FROM THE EXHIBITION TOOK BY MARI OHTA 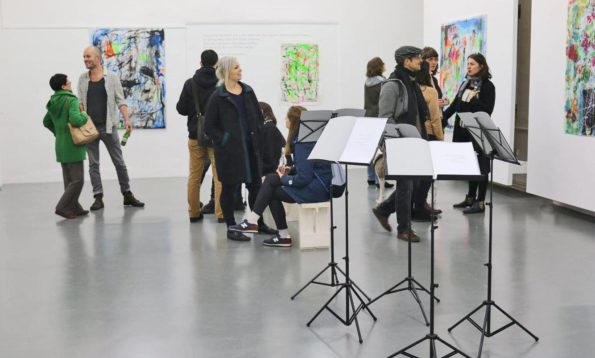 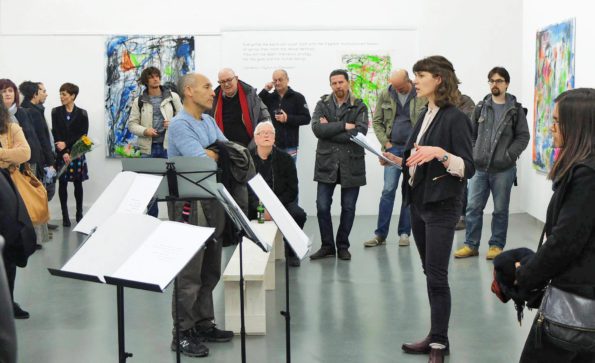 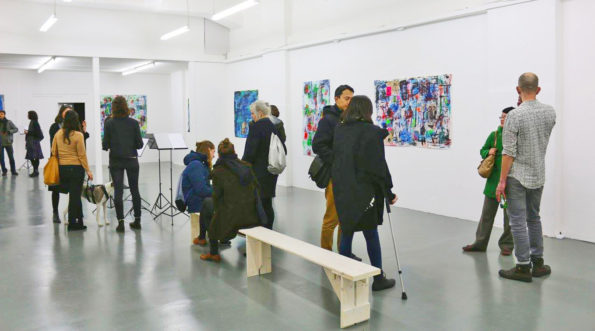