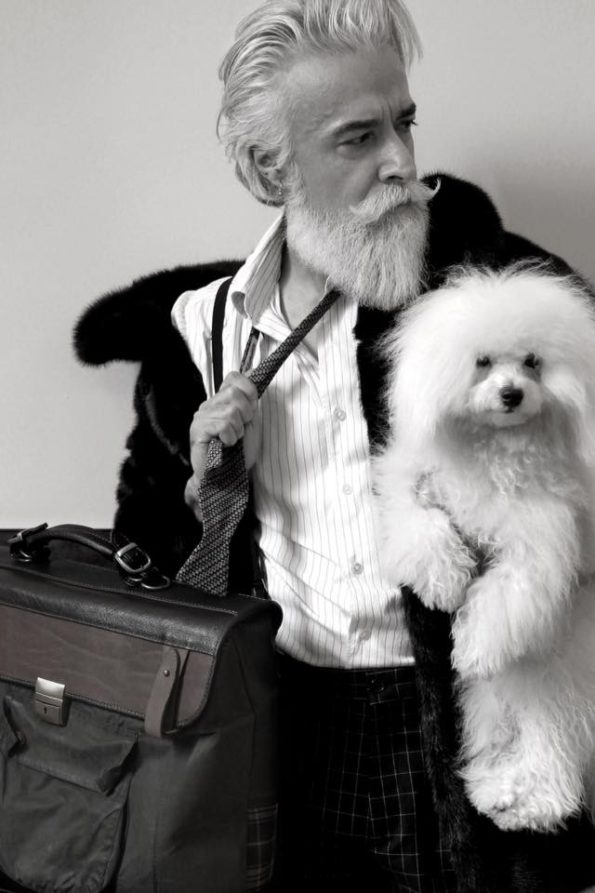 The story of his beard belongs to the story of a man that had lost everything and was reborn, like the Phoenix from ashes. Someone would say, incredible, someone else,, a marketing trick, but no, this really happened. In 2012 a horrible earthquake hit Italy, in the Emilia Romagna region and Alessandro Manfredini, in those days, a sculptor and graphic designer at a famous ceramic company from Mantova, lost his house and  everything he had befor. “It was a bad period that is even now  difficult to forget”, he told JL Interviews magazine.

Encouraged by a photographer friend, Chiara, he left his trailer, rented a room close to work and soon started to put his “stylish” pictures on Instagram, pictures taken by his friend, of course. It was she that immediately realized that Alessandro had something more to offer the world. This was the “tragic” start of Manfredini’s unexpected and international model carreer (Solomon’s Beard, Lavazza, Philipp Plein, Oliver Goldsmith Sunglasses, Karl Mommoo or Thierry Lothmann).

His long and white beard is definitely his hallmark. Funny is that he was discovered not by an Italian but by an English company. In 2014, Captain Fawcett was crazy about his beard. Manfredini  has worn it since he was 30. Now, at 50, this good looking and sociable man, feels very lucky to be a model. Four years have already passed since he began this job and he can’t complain about a lack of work proposals. Yes, the times of long beards is living a renaissance; no wonder, every beard hides its own secrets.

You are the most original model of Italy! My compliments! Since when have you been doing this job?

I started the modeling profession 4 years ago. It happened by chance after being noticed by a famous English beard products house and by their photographer.

What story does your long beard hide? Why wear a beard and why long?

Since I was 30 I have always worn a beard, maybe a bit shorter than now. Let’s say that in the post-earthquake period I let it grow because at that time I neglected myself. 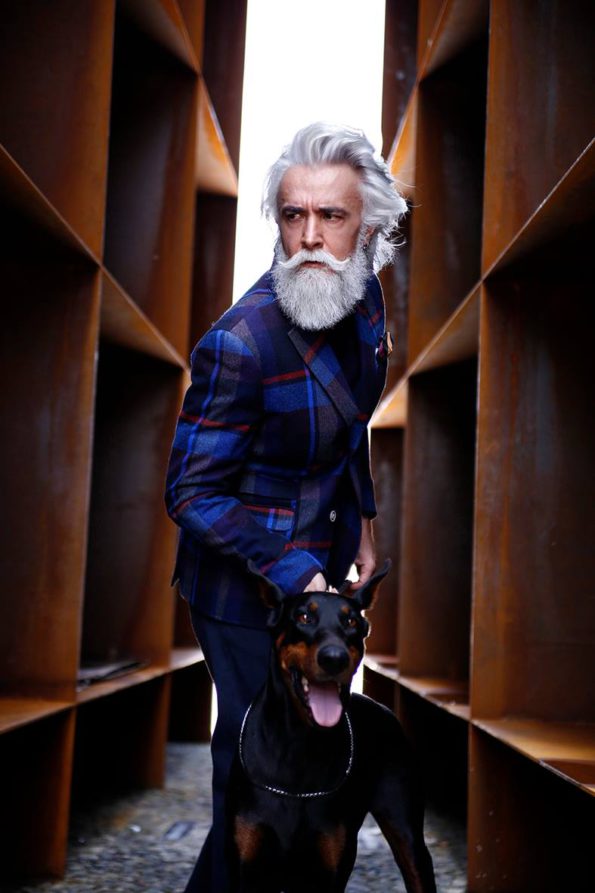 Your is a chilling story, I mean the earthquake experience. You had a lot of courage and determination in recovering from scratch. Did someone help you?

It was a bad period that even today it is difficult to forget. More than courage, I let myself be transported by the events. At that time I was isolated and I didn’t want to be helped by anyone. It was a dear friend of mine, Chiara, who helped me move from the trailer to a rented room near my workplace and from that momen on I slowly took my life back and my dignity.

Now, since your fame, have you helped earthquake victims or have you ever participated in a publicity or charity event?

The word “famous” makes me smile a little and I do not consider myself so. For the victims of the earthquake I have always joined with my company, contributing to donate hours of my work. And I’m always available to do charity services. I took part in a charity research project on melanoma (Project60), photographed by Brock Elbank.

If you had not had all this success on social media, what would you have done today?

I would have done what I’m doing. I’m a graphic designer at  a very famous ceramics company. Work as a model for me is still a game, an opportunity, that I know how it started and how it will end too.

You work a lot, you are always traveling. Can you name the most important brand names which you have worked for?

Which photo shoot are you most proud of and why? What is your favorite photo?

All the services leave me with a nice memory of interesting and professional people. But I would say that my heart remains in London for the Project60 and the Brock Elbank photographer who was the first to work with me while I modeled for Captain Fawcett.

Do you still have time for sculpture? What kind of sculpture do you practice? Perhaps you are preparing an exhibition?

My sculptures represent human figures living in a magical world located in my heart. I try to find time for my sculptures even though for now my time is dedicated to my friends. I love dinners at my house and surround myself with friends. Not having a real house for 5 years I suffered a lot, I was lost so now I dedicate my time to social life.

Your style is impeccable, to envy. How do you like to dress more? Which designers would you recommend? What should a man not avoid to be fashionable?

Since I was a child I distinguished myself with my style. I like to combine different styles, I don’t have any stylists that I prefer, I just know how to wear the things you wear. It has always been like that for me. Sometimes I design my vests and pappions. Let’s say that from a man’s wardrobe a well tailored vest and a pair of Red Wing shoes shoul not be missing. 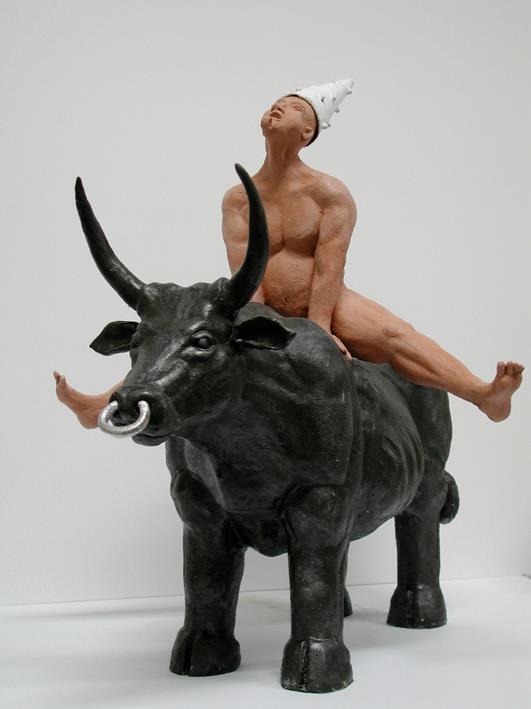 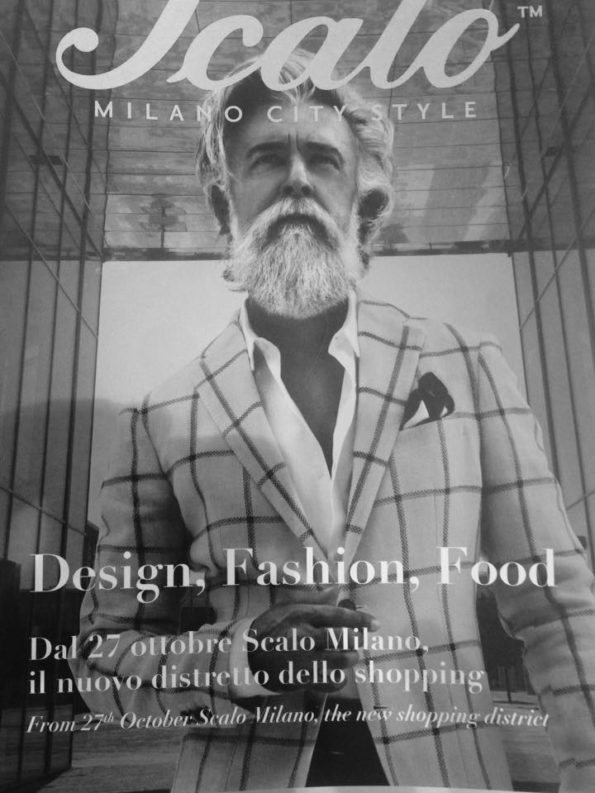 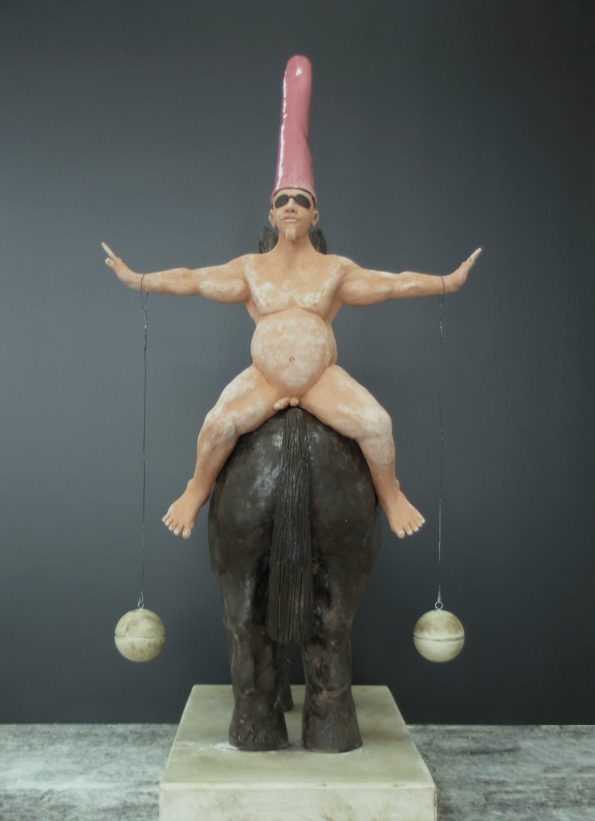 What does “beautiful”, “fashionable”, “trendy” mean for you? Do you feel such?

It is important for me to feel good wearing the clothes and feel at ease. Everything is fashionable and everything is not, so I always say to look for a style that each of us has.

Are you thinking by any chance to open your own brand? Do you see yourself as a sculptor – designer in the future?

I don’t know if I will open my own brand, or not.  My future I see is in doing my sculptures and having dinners with my friends around a table, I love cooking.

We haven’t talked yet about the city of Mantua, your city. How does your city inspire you every day? Will you leave it one day?

I am half Modenese and half Mantuan. I am very attached to my origins, to my land, and its flavors and scents: a land that has taken so much away from me but has given me so much. I have now returned to my house in the countryside surrounded by green where I have created my own balance.

Photos by Mr Elban, Donato Testoni for Karl Mommoo and Chiara Lasagni (picture with a dog)